Due to my blossoming rediscovery of the wonderful world of film I have neglected this blog lately. I’ve been too busy planning and recording the Failed Critic podcast, going to the cinema, and tracking down obscure documentaries to watch online to get on with the serious business of writing about the ‘Top 250 Films of All Time’.

That said – I have managed to watch the following films recently which I will briefly discuss now.

I rewatched this classic musical featuring a young girl plucked from her small Kansas farm and dumped in the wonderful world of Oz for the Child Protagonist Triple Bill in the Failed Critic Podcast. I think it actually gets better with every viewing – or at least, I have lost another layer of hipster cynicism between each viewing.

I actually tried the ‘Dark Side of the Rainbow’ trick, and I was reasonably impressed. My attempts to recreate this magic with Shed Seven’s seminal ‘A Maximum High’ album were less conclusive.

Another one I had already seen – although this was the Director’s Cut on Blu-ray which was brand new to me. I know that some people think the extra 10 minutes either slows the film down needlessly, or consisted of schlocky SFX – but I think this was my favourite viewing of the film to date.

It’s an outstandingly creepy film, and it’s easy to forget how natural Linda Blair is in front of the camera. I love this film, and I think I love the mythology and stories behind the making of it even more.

This was my first experience of watching Buster Keaton, and I am ashamed that it has taken me this long. I adored this film, and the care and attention paid to some of the stunts is nothing short of amazing.

There are a few scenes that don’t quite work for a modern viewer – a prime example being the immediate moments after Keaton steps into the film projection which if he wasn’t there would be a bland and slightly random montage of scenery clips.

The pool scene has immediately placed itself in my top 10 scenes of all time already. I’m now looking forward to The General. 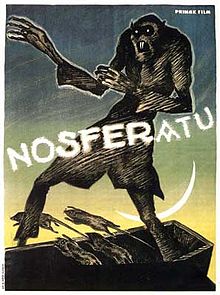 The original vampire film, and one I hadn’t seen in years – and certainly never sober. This film has a fascinating back story about how the film-makers basically took the story of Bram Stoker’s Dracula and changed a few names and plot details to avoid getting sued by the estate of Bram Stoker.

The most interesting change to the story, and the one which has lived on long beyond anyone involved in making the film – is the fact that Nosferatu (the rip-off of Dracula) is killed by direct sunlight, rather than just weakened by it as in Bram Stoker’s version.

This is more of an interesting film for its cultural relevance and influence, rather than for entertainment value – unlike Buster Keaton’s Sherlock Jr. for example.