I am increasingly finding it difficult to keep on top of this blog – mainly because I find that podcasting is not only more fun and social than the solitary world of the blogger, but it is also a lot more work than turning up for 2 hours every Sunday. I’m going to the cinema a lot more, and believe it or not I actually spend a lot of time writing notes for my appearances. This may well astound those of you who listen to The Failed Critic Podcast.

I have seen three more films on the Top 250 since the last update – and here is a quick summary:

Directed by David Fincher and scripted by Aaron Sorkin – this film was always going to be very stylish with some witty quick-fire dialogue. The fact that this film is also edge-of-your-seat interesting despite essentially being the story of two simultaneous tech industry lawsuits is testament to the greater film-making skills of Fincher/Sorkin.

It tells the story of how Mark Zuckerberg (Jesse Eisenberg) created Facebook, and how he fell out with his “only friend” Eduardo Saverin (the heart of the film, and played brilliantly by Andrew Garfield) in the process of making Facebook the internet behemoth it is now.

In short, I really enjoyed it. Not the best thing Fincher and Sorkin have ever done – but deservedly in the Top 250.

You can listen to my thoughts on both of these films here – in the podcast where I choose three of my favourite films of the 1970s, and discuss the problems that all 3 faced with censorship at the time.

A Clockwork Orange is simply one of my favourite films ever. The combination of elaborate staging, alienating direction, the classical music, and Alex’s narration allow us to enter a space where we can feel sympathy for a rapist and murderer. The alienation of the viewer is vital, as this film could never work if shot in an ultra-realistic style. 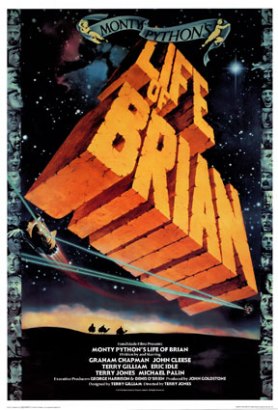 Monty Python’s Life of Brian however, is not even my favourite Python film. That said, that’s like saying Lagavulin 16 year-old isn’t my favourite single malt whisky (it’s Glengoyne 21 year-old if you’re interested). The fact is, Life of Brian is a brilliant comedy film that hasn’t dated in over 30 years. It contains some of the greatest comedy sketches of all time (What Have The Romans Done For Us, and The Judean People’s Front come to mind), and is probably a more rounded film than Holy Grail (which I maintain is the funnier film, and therefore ultimately the better film).