A new series where Failed Critics contributors look back on a particular decade in the world of cinema, choose their favourite films from each year of that decade, and discuss the legacy those years have left us.

Kate has chosen to relive the nineties, because she’s old enough to remember them in their entirety  This week she revisits 1990. 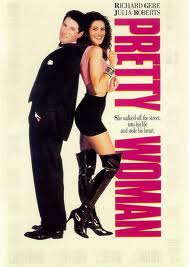 “I think we both know she’s not my niece.”

Bridging the gap from the big hair and leather boots of the Eighties to the sleek bobs and kitten heels of the Nineties is Pretty Woman. Hot off the heels of the female-barbershop-quintet-renal-failure-romp Steel Magnolias, Julia Roberts smashes it, teaches Hollywood Boulevard a lesson, and basically makes us all want to become a hooker.

I’ve written before that I first saw this film in primary school. Over twenty years on, it stands the test of time. Roberts is adorable and exquisite – the need to exclaim how much nicer her real hair is once she loses the wig never tires. I generally don’t see the appeal of Gere, though his brooding business man (a precursor to Sex and the City’s Mr Big)  is endearing. However it’s Héctor Elizondo as the kindly hotel manager who steals the show. And his real life love story with director Garry Marshall is even cuter than Edward & Vivian. 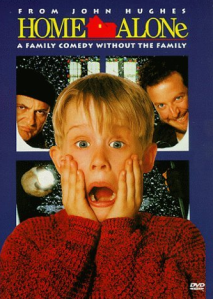 “Kevin, you’re such a disease!”

After defining teen movies throughout the Eighties, John Hughes enters the new decade with a new protagonist, and children everywhere respond by attempting to bunk off their family holidays. As is the John Hughes grown up hating way, eight year old Kevin is smarter, more socially aware, with better woodworking skills than his adult counterparts, and defends his house accordingly.

Watching this as a kid around the same age as the star was pretty exciting, and a great way to diminish a fear of burglars. Just don’t say it launched Culkin‘s career, because he was brilliant in Uncle Buck the year before. It stands up to repeat viewings, and the great Catherine O’Hara as Kevin’s forgetful mum becomes more infuriating each time. I’m a sucker for a good Christmas film, and you can’t beat a bit of Carol of the Bells. Home Alone 2 is miles better, though.

The highest grossing film of the year, nominated for five (winner of two) Academy Awards, and perpetually dismissed as a chick flick. The ghost of a murdered banker enlists the help of a usually phoney psychic to save the life of his lover. A potter’s wheel and The Righteous Brothers also star. That Sam and his colleagues conduct their multimillion dollar deals on VDU green screens shows the leap in technology about to take place. By the end of the decade we were watching The Matrix.

A love story, no doubt, but the relationships both Sam and Molly have with psychic Oda Mae Brown are the important ones. Goldberg plays cynical and hysterical to perfection, and this role sets her up nicely for a career as a nun. The late Patrick Swayze offers up some serious emotional acting, after spending the previous few years typecast as a face kicking dancer. He still manages to take his top off quite a bit though, which is no bad thing.

“Before he came down here, it never snowed. And afterwards, it did.”

Tim Burton‘s surprise follow up to Beetlejuice and Batman chronicles the discovery of an inventor’s unfinished creation in weird suburbia. The film is said to be largely autobiographical for Burton. Except the bit where he has scissors for hands. A tragic love story about society, reality and hedge-trimming. Beauty and the Beast for the Nineties, but without the happy ending.

An angsty teen staple, I watched my VHS copy until it died. Even the trailer makes me well up. Depp is stunning as our Gothic hero, in the first of many collaborations with Burton. And the always good Dianne Wiest, is the nicest Avon lady you could ever hope to procure eye shadow from. 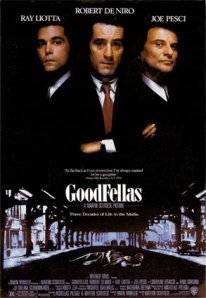 “One day some of the kids from the neighborhood carried my mother’s groceries all the way home. You know why? It was outta respect.”

Spanning three decades in the life of a gangster and, after the economic slump of the Eighties, showcasing a lifestyle we could all aspire to. A contender for the greatest film of all time (until we reach 1994, at least) and certainly one of Scorsese’s greatest achievements (not counting his Curb Your Enthusiasm cameo).

Ensemble cinema at its best, marred only by the fact that our original DVD copy had to be flipped over halfway through the film to accommodate the 146 minute running time. From the pitch perfect soundtrack, to that tracking shot, Goodfellas is perfect every time. And then we got to relive it the following decade, when half the cast showed up in The Sopranos.