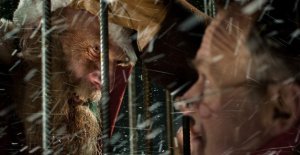 It had to happen at some point. I’m Failed Critics’ resident film snob and so far in this series I have written about two safe, mainstream Christmas films that sit well within the confines of what you might call ‘wholesome family entertainment’. It’s time to crack out the dark and obscure foreign-language stuff for those of you with toothache from all the cinematic saccharine we’ve served up this week.

How many of have you ever watched The Thing and thought “I love this film, but how great would it be as a Christmas film?” Probably not many, come to think of it, but now I’ve planted the thought in your head let me present Finnish horror film Rare Exports.

Released in 2010, Rare Exports is a truly odd and wonderful beast. It takes place in the weeks leading up to Christmas, and features a child encountering elves and Santa Claus. So far, so Christmassy. But this isn’t all Richard Attenborough and Dudley Moore. Oh no, it seems that the creature who inspired the Santa Claus myth didn’t really have a lot of time for the administration of a naughty and nice list, let alone instigating a system of multiple checks and balances for said list. In fact, in a startling show of public service efficiency the Conservatives would be proud of, he focussed on the task of punishing naughty children.

The story starts a few weeks before Christmas when a mining expedition discovers what appears to be a tomb buried deep inside the Koratunturi Mountains on the border between Finland and Russia. Young Pietari (son of one of a group of village reindeer herders) witnesses this piece of terrible acting and exposition and heads back to his house to read up on the origins of Santa Claus. A few weeks pass and on the day before Christmas Eve the villagers discover the reindeer that they were counting on for meat have been slaughtered, and the mining compound over the border has been abandoned.

As Pietari starts to solve the mystery of the footsteps in the snow outside his window, and the disappearance of the village children overnight, he finally begins to earn the respect of his uber-macho father who earlier in the film wouldn’t even let his son drive the snow mobile. I mean seriously, what is the point in living in the Finnish wilderness and having to eat reindeer that have been pissed on and buried for months if you don’t even get to drive a snow mobile?

The rest of the film is played as a very straight horror film, without ever being too graphic or violent. In fact, I’d argue that older children will not only be fine with the levels of tension and violence in the film, but they will enjoy the anarchic portrayal of a murderous Santa and his creepy elf followers.

Read the 12 Days of Christmas Films so far, and you can catch Rare Exports on Sunday 23rd December, 1am on Channel 4

2 thoughts on “Santa Claus is coming to town. To kidnap your children.”