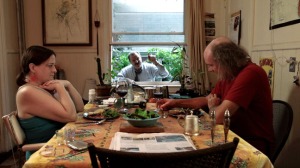 I have a confession to make. When I read that Breakfast with Curtis was a micro-budget indie film about some quirky characters, and filmed in the writer/director’s house with her friends and neighbours playing the main roles; well, let’s just say I was apprehensive about spending ninety minutes in their company. I’ve turned off too many wilfully quirky films with larger budgets and recognisable actors over the years to have held out much hope of this film being any good.

And sometimes the most wonderful feeling in the world is being proven utterly wrong.

The film opens on the type of incident most children will have experienced, when 9-year-old Curtis (Jonah Parker) is verbally abused and threatened by his neighbour Syd (Theo Green) for throwing stones at his cat. It’s a situation that immediately tapped into one of my childhood fears; that of scary grown-up neighbours who seemed like an entirely different species. Every childhood friend of mine knew a garden where they dare not kick their ball, for fear of incurring the wrathful neighbour. As adults we’re conditioned to fear the wild and uncontrollable youth, but like a spider trapped in a bath, they are probably more afraid of you than you are of them.

Five years later, and with a neighbourly cold war with its roots in ‘the incident’ showing signs of thawing, Syd (the rather bohemian online bookseller who threatened to crush young Curtis’ skull) asks Curtis to help him film some video blogs for his business. Curtis is unsure, but his home-schooling mother persuades him to take on a project that will help build his self-confidence, as well as bridges between the two households.

Our interview with director Laura Colella gives a fascinating insight into how the film came about, and the process used to make it. Syd’s housemates are friends and neighbours in real life, and many of the film’s sweetest and most genuine moments are simply cinematic portrayals of these ‘real lives’. Right down to the video blogs that Curtis shoots and edits to Syd’s great pride and delight, which are genuine videos Jonah filmed with Theo. These connections provide the creative spark for the film, and help it to avoid layering characters with increasingly bizarre affectations and foibles purely to raise a laugh. The inhabitants of Colella’s world remain grounded in reality, and it is a rare film that is happy to simply invite us to share in the lives of some wonderful people.

Breakfast with Curtis will not appeal to everyone, even those without the prejudices that I admit to having about ‘this type of film’. Colella herself admits that “plot-driven and predictable work doesn’t interest me”, and viewers who want ‘something to happen’ may walk away disappointed. However, anyone who wants to see a heart-warming tale of a boy’s first seminal summer, and simply likes to spend time in the company of funny and interesting people, will love it.

Breakfast with Curtis is showing at Glasgow Film Festival on Saturday 16th February at 5.20pm, and Tuesday 19th February at 7pm. Tickets are available here

4 thoughts on “GFF13: Breakfast with Curtis”