A series where Failed Critics contributors look back on a particular decade in the world of cinema, choosing their favourite films from each year of that decade.

“Man was created by Nature in order to explore it. As he approaches Truth he is fated to Knowledge. All the rest is bullshit. “

I first read about Solaris in a book called Why Aren’t They Here? by Surendra Verma, which primarily explores (amongst other theories) the Fermi paradox. Put simply, if intelligent alien civilizations exist, and the universe is as vast as we think it is, then why haven’t they made contact with us yet? One of the many possible answers for this could be that we have no way of communicating with them, even if it were physically possible to meet them. A famous philosopher Ludwig Wittgenstein once proposed that “if a lion could speak, we couldn’t understand it”. What he means is, even if an animal could physically speak a language to us, our points of reference would be so far apart, it would just be gibberish. We wouldn’t be able to understand a word that lion said, much less recognise it was attempting communication.

What does this have to do with Solaris? Well Andrei Tarkovsky‘s enormously important Russian sci-fi film, based on a Polish novel of the same name, is about this giant, living, liquid planet that attempts to communicate with the humans that are trying to study it. Ultimately, as Wittgenstein predicted, it’s impossible for them to fully understand each other. It’s a story of love and loss that explores the depths of the human mind/imagination with some thought provoking imagery and mind-meltingly complex ideas.

I have to admit, Solaris is mostly on this list out of respect for what it achieved and for the concept behind it. I like to think I can occasionally watch these long, slow, art-house films and enjoy them. Truth is, I found Solaris a really difficult film to watch. Patience is a virtue supposedly, but when you’re watching a film where (for what seems like an eternity) all you’re watching is nothing more than a camera attached to the front of a car as it travels down a motorway, you kind of forget that! I think a lot of the more artistic visual elements of the film went over my head somewhat. However, rarely do you see such an intelligent and thought provoking sci-fi film that I think it can just about nudge blaxploitation horror picture ‘Blacula’ out of my top 5 films for 1972.

“Whenever you’re ready, I’ll take on any Japanese here.”

Whether you accept that there are 4 or 5 full feature films, and whichever film of those is your favourite, one thing that seems to be universally acknowledged is that Bruce Lee was an icon of early 70’s cinema. His legacy has endured over the decades, influencing film writers, directors and stars. He made Asian cinema (or at least Kung-Fu films) the phenomena it is in the West. I don’t need to go on about this. I’m not the first to point this out, I won’t be the last, nor am I the most qualified!

What I love most about talking to people about Bruce Lee’s films is everyone seems to have taken away something different from his movies. I watched Fist of Fury, Enter The Dragon and The Big Boss when I was a young teenager, first getting into movies. Before then, he was just someone I knew from the poster my artistically talented uncle had drawn. There was something about that image of Lee (which looked a little bit like this) that drew me in. He just looked so cool in that poster and the young impressionable me wanted to see just how cool he actually was. As I watched those films (and as I got older Game of Death and Way of the Dragon too) I realised how cool he actually was. Answer: very.

Despite being his second major film, and also starring as Kato in his own TV show, Green Hornet, (including cameo’s in the Adam West Batman series) it was Fist of Fury that launched him into movie superstardom. It’s a simple mystery plot in which Lee is subjected to bigotry and prejudice by the Japanese. It’s not the plot that made the film so endurable. It’s Lee. It’s the cool one liners he delivers mixed with the impressive action/fight sequences that he choreographed himself. It’s that recognisable shriek as he kicks someone in the gut, dispatching baddies with one blow. It’s the character of Chen and how nobody other than Lee could’ve played him in the same way. It’s quite simply an excellent kung-fu film that any fan of the genre should watch and adore. 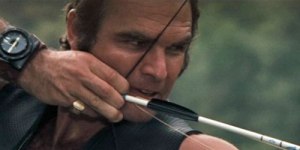 “Goddamn, you play a mean banjo!”

If there’s one thing writing these Decade in Film articles are good for, then it’s for forcing me to finally get around to watching some classic films. The flip side to that is films I really love and originally included in my top 5 have to make way for films that, as it turns out, are just undeniably better. Take, for example, Conquest of the Planet of the Apes, which is now losing out on a top 5 ranking position thanks to John Boorman’s Oscar nominated film about 4 guys who go on a trip down the Cahulawasse river in the arse end of the American south that they won’t forget.

Until this week, I’d only ever seen clips of Deliverance. Hell, I could even play part of the duelling banjos song on my guitar despite never having watched the whole of the film! Now that I have seen it, as Matt Lambourne so accurately predicted would happen, I now “understand a number of long-standing cultural references towards it that may have gone over my head before”. It is so influential on other survival films.

I love Burt Reynolds anyway, and even without his moustache, he was still awesome here. He has all the best lines, looks the most bad-ass and has probably the most interesting character too. Although John Voight may have something to say about that; he also has a very interesting character. There’s a lot that makes this film memorable, from the “skweeee” scene, to the fantastic soundtrack. Don’t be like me. If you get the chance to watch Deliverance, do it!

2. Aguirre: The Wrath of God 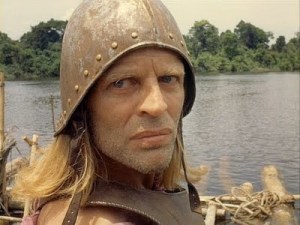 “I, the wrath of God, will marry my own daughter and with her I’ll found the purest dynasty the earth has ever seen.”

I don’t have much knowledge of the Spanish conquistadores beyond what is taught at a very basic level at school and what the BBC kids sketch show Horrible Histories has educated me in! So what struck me most in Werner Herzog’s tale of the notorious Don Aguirre and his quest for the mysterious cities of gold (dododo do doo doo, aaahhh) was how real the film felt. I can only liken it to something like the David Simon HBO TV series, The Wire (bear with me here…) It’s a culture and a place I have virtually zero experience or knowledge of beyond fictional representations through TV and film etc, yet the world they have created is so utterly believable that I never question it. I accept that it is mostly likely exactly how these people lived, how their journey unfolded, how the jungle and the river sounded, how it looked, etc.

The title character, Aguirre (played sublimely by Klaus Kinski,) is incredible and it’s not difficult to believe he was as “mad” as he is portrayed as being here. He’s a constant and menacing presence throughout the whole film. The way the film is shot is almost like Aguirre is breathing down your neck, watching your every move, and it’s very uncomfortable. Effective! But uncomfortable.

One other thing I loved about this film (there are much better parts of the film involving all manner of themes about betrayal, love, history, slavery and all that jazz, but something that stood out for me) was the music! I loved that bloke playing the pan-pipes. That tune he whistles is infectious. The whole film is superb though and fully deserves to be on this list. 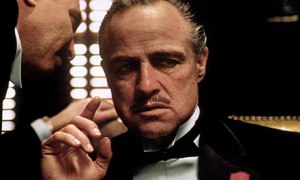 “Michael: My father is no different than any powerful man, any man with power, like a president or senator.
Kay Adams: Do you know how naive you sound, Michael? Presidents and senators don’t have men killed.
Michael: Oh. Who’s being naive, Kay?”

The Godfather. Of course, The Godfather. What else but The Godfather? It had to be The Godfather. A film so critically and commercially successful that only the insane would leave it off a list of their favourite films from 1972, never mind not have it as first choice. I mean, come on. As enjoyable as the British horror film ‘The Asphyx‘ starring Robert Powell is, or as deeply disturbing as Wes Craven’s directorial debut ‘The Last House on the Left‘ is, there’s no way any film was going to top Francis Ford Coppola‘s masterpiece.

From the very first scene to the last, The Godfather is undeniably a fantastic example of film making. The swagger that all the characters carry with them, thanks mostly the faultless performances of some unbelievably well written characters by absolutely everyone involved, makes the film feel so real. It’s a tragic story about the collapse of man, the sense of being trapped in a “family” that you can not escape, a destiny that you are doomed to, but at the heart of it is this ideal of love and togetherness.

There are massively conflicting emotions you get from the film, things you know that are not right, but you can’t help it anyway; wanting characters like Don Corleone to recover, to improve, to do well, despite knowing that he is exactly the sort of person that you hope you never have to encounter in your life, is testament to the creativity that has gone into creating this iconic character from the make up, to the costume, the setting, the direction and least of all the acting. It’s a breathtaking performance from Superman’s dad and Oscar winner Marlon Brando, which is rightly regarded as one of the absolute best in cinematic history.

I’m not sure I can actually say all that much else about it that hasn’t been uttered a million times before by people able to put into words their thoughts much more eloquently than I could, so I’ll cut my review short right here. But suffice to say, it’s a film that is timeless and a classic for a reason.

You can read Owen’s choices for 1971 here, and find the entire Decade in film series here.