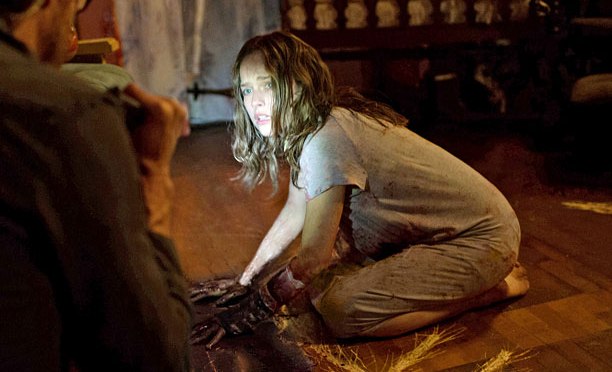 You know that time you went to a gig and the guy in front of you spent the whole evening with his arm in the air, filming the entire thing on his phone? To the point where you distractedly missed your favourite song, because you were fantasising about pounding him in the head with his own camera? Devil’s Due is the story of that guy.

Zach films everything. It’s his thing. His schtick. It’s not creepy, or annoying, or down right ridiculous at all. He starts the movie by scaling a wall and climbing into his fiance’s bedroom the night before their wedding, while filming it, so your opinion of him is pretty low from the get go. Yet for someone who, apparently, spends 95% of his time with a video camera in hand (if the impassive reactions of his family are anything to go by) it’s astounding how incapable he is at holding the fucking thing steady. “This is where you’re going to go to school”, he later narrates to his unborn baby. Only you can’t see a clear shot of the building through his hand tremors. The certificate should include a motion sickness warning: do not eat a massive katsu curry and ice cream directly before viewing.

I’ve heard enough disparaging references to “bastard found footage” to know this genre is something of a bone of contention amongst the Failed Critics. I love horror films, but haven’t seen many of this type since my mainly snot based memories of The Blair Witch Project. According to the directors “Devil’s Due doesn’t pretend to be footage that anyone has found or compiled, it’s simply a story told through cameras that exists in that world […] as the character’s lives spiral out of control, we’re able to mirror that journey visually by shifting to different POVs”.

Sure, I can suspend my disbelief as to the collation of such footage. However I still can’t fathom quite how and why those cameras exist in that world. But why, I wanted to scream at every scene, why is he filming that? And why does no one seem in the least bit surprised? Why aren’t kids in the street asking him what the hell a video camera is? How come you never see him charge the thing? Most importantly: how did he just get away with filming a load of strangers at a pregnancy yoga class, without a hormonal woman choking him with her pillow? That would simply never happen.

Yet even more frustrating than the incessant videoing is the fact that he never watches any of it back! The couple spend hours filming their honeymoon, fair enough, they’re sickening newlyweds. But they never bothered to show the highlights to their excitable extended family? He never stuck their zip wire clips on Facebook? Never revisited the shots of his hot wife on the beach, before she got all pregnant? Unrealistic. He is finally driven to dig out the rushes when his missus starts killing priests with her red eyes, but by that point everything’s gone to shit anyway.

Poor Samantha, the previously hot wife, is pregnant and supposedly showing signs of ‘erratic’ behaviour, which are intended to suggest there might be something seriously wrong with the baby. My friend and I (29 & 28 weeks pregnant respectively) watched the film in its entirety and concluded that she displayed entirely normal and rational behaviour throughout. Examples include –

Sitting stony-faced through her baby shower, nursing a grubby champagne flute of orange juice, while all her friends got pissed and shrieked about blankets.

Smashing in the windows of a 4 wheel drive, after it almost reversed into her in a car park.

Screaming ‘DON’T TOUCH US!’ at her husband, when he interrupted a bout of insomnia and started pawing at her bump in the middle of the night.

Ditching her surprise birthday party (who throws a pregnant woman a surprise party? Come on!) to go upstairs and attend to more pressing tasks, like decorating the nursery. Ok, so she was scratching a massive hole in the floor with a knife, whereas I just bought an Ikea rug, but we all have different opinions on aesthetics.

As a long time vegetarian, standing in the meat aisle of the supermarket eating raw minced beef directly from the packet. I had a similar incident with black Jelly Babies at an Asda checkout last week. And I don’t even like Jelly Babies.

After a lot, and a lot (and a bit more) build up, the inevitable blood, gore, birth and death finale is all rather anticlimactic. Far more disturbing is the moment earlier in the film where Sam’s new doctor glibly announces his intention to perform an amniocentesis, before plunging a 16 foot needle directly into her abdomen. As it stands, it’s all a bit abrupt in the end. It would’ve been nice to have discovered if she’d given birth to a little boy devil baby or a little girl devil baby. Or to see how Zach’s overwhelming urge to document everything went down with his fellow prison inmates.

I felt for Sam, with her chocolate chip cookie binges, and fridge full of discarded takeaway cartons. Pregnancy can be a shitty time even when you’re not carrying the Antichrist. Nonetheless, she married the douche with the video camera. And, at the end of the day, they both made some pretty poor choices on the last night of their Dominican Republic honeymoon. The riskiest thing we ever did on our honeymoon was take a drunken Segway tour. Frankly, they had it coming.

4 thoughts on “Devil’s Due”