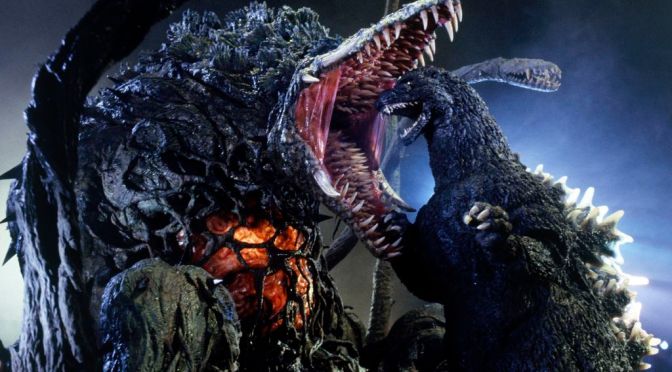 How does a franchise will so much history succeed in being fresh and relevant in the modern era? Matt Lambourne gives us the low-down on how 2014’s Godzilla falls in line with it’s predecessors. 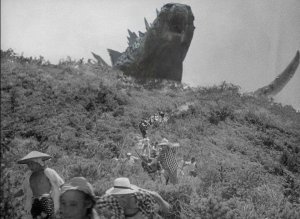 After well over a year of personal unbridled anticipation, Godzilla finally launched this weekend. I have been looking forward to this film more than any lined up for 2014 and as a fan of the series I had enormous hopes and even bigger expectations for Gareth Edwards‘ reincarnation of The King of The Monsters as detailed in my preview piece on FailedCritics.com.

First of all, let me get this off my chest; we were lied to. In the early trailers for this movie it was touted as a return to the role of unprejudiced destroyer for Godzilla. I specifically refer to the Robert Oppenheimer monologue used in these trailers, which powerfully leaned towards this conception. Let me explain the Godzilla timeline in brief and how he has been portrayed in the numerous movies he has appeared in for the benefit of those reading who are less familiar with its history.

The original Gojira of 1954 was a monster created as a bi-product/consequence of Nuclear experimentation; a warning to mankind that dabbling in such powers would ensure its self-destruction. Godzilla was rampant, aggressive and terrifying to literally everything around it. It would not ignore people or buildings, or boats in its path; it saw everything as potentially hostile and was equally hostile in return, seemingly without motive. It’s this mentality that made it terrifying, particularly within the psyche of the generation who were recovering from the Nagasaki and Hiroshima A-Bomb attacks.

The role of destroyer was consistent for the first several Godzilla movies produced by Toho, up until 1964’s ‘Ghidorah – The Three Headed Monster’. At this point Toho began to portray their star asset as a saviour of the planet, protecting Japan from Monsters invading from outer space and crossing over from some of their other intellectual properties such as Mothra and Rodan.

This began an almost annual release of Godzilla squaring up against often less-impressive foes and the series being tailored to a more family based audience. The initial ‘Showa’ era ran until 1975’s ‘Terror of Mechagodzilla’ before the series took an almost 10 year hiatus.

Thus beginning the rebirth, in 1984s ‘Return of Godzilla’ (Godzilla 85′ outside of Japan), Godzilla returned to its most destructive form, a direct sequel to 1954 original that totally disregards everything that has happened in between and would reinforce Godzilla as humanity’s greatest threat. This would remain consistent during the entire second series of movies (The Heisei era) until 1995’s Godzilla vs Destoroyah.

Toho brought Godzilla back one more time after Roland Emmereich’s abomination in the Millenium series that began with Godzilla 2000 and ran until ‘Godzilla: Final Wars in 2004 which is notable for killing off 98’s impostor Godzilla (known as Zilla in the film) with the plots taking a more science-fiction base, but Godzilla remaining as an antagonist to mankind.

So where does Gareth Edwards’ Godzilla fall amongst this lot? Well, in short it probably falls much closer to the heroic Godzilla of the Showa era post 1964, although there is certainly a lot more collateral damage than in those earlier family-friendly flicks. For me it is not the Godzilla I’d hoped for. I was hoping for something more akin to Return of Godzilla, a Toho origin story with a Hollywood budget.

I think Edwards does an excellent job of making this film beginner-friendly as well as relevant enough to quench the thirst of the long-standing Godzilla fan. It certainly doesn’t take any prior knowledge of Godzilla mythology to enjoy this instalment. There are nice touches that respectfully nod to previous films, such as the specimen tank labelled ‘Mothra’ in Brody Sr’s house, the inclusion of Dr Serizawa (as per Gojira) albeit in a different role, the reference to King of the Monsters after the concluding battle scene. Also the MUTO creatures appear vaguely similar to that of Orga from Godzilla 2000, although they are much leaner and agile. Whilst the film succeeds in giving tribute to the source material, it is very much its own story.

It’s clear to see the film takes much inspiration from its predecessors and uses the material in a very respectful manner. The traditions of Toho remain intact and no doubt the fan-base will swell for both the Japanese versions and the newer American Godzilla. Whilst it isn’t everything I hoped for and more, it is a triumph in its own right. I won’t go into scoring or labelling of the movie as Failed Critics will be speaking in depth about this on this weeks podcast, but the bottom line is this should be enjoyed and celebrated, even if it is Godzilla USA done right rather than a reboot of Toho Godzilla.

Go get your fill, there will be few blockbusters this Summer that will impress in some form or another as this succeeds in doing.

Matt is writer and podcaster at Failed Critics and can be found either on twitter @Matt_Lambourne or in his bedroom watching old Japanese Godzilla VHS tapes.