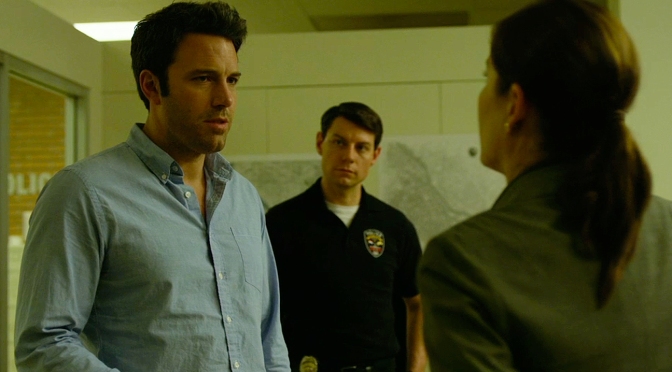 Gone Girl disappears with a lot of cash, Annabelle scares up big bucks, Nas: Box Office Gross Is Illmatic, you already know the obvious pun for Left Behind, and Other Box Office News.

Defying typical David Fincher luck, Gone Girl obliterated the weekend and took first place with $38 million in ticket sales.  Why do I say “defying typical David Fincher luck”?  Well, because David Fincher films do not open past the $20 million mark, the only exceptions being The Social Network (and even then just barely), The Curious Case Of Benjamin Button (which had Brad Pitt and enough crowd-pleasing Oscar bait schmaltz to drown kittens in) and the prior biggest opener Panic Room (which… OK, I’ve got nuthin’).  Plus, you know, the fact that the film is bleak and nihilistic and preposterous and nasty as all hell.  But, hey, it’s the date movie of the year!  I mean, I don’t know about you folks, but I find that films about psychopaths and sociopaths are just the most hopelessly romantic!

Anyways, the success of Gone Girl means that, for once, justice prevails at the box office!  My favourite film of the year so far managed to hold off blatant coat-tails riding cash-grab Annabelle, which entered in second with $37 million!  Admittedly, that is still extremely close and could lead to a switch in positions when the actuals come in, but I am going to pre-emptively do my happy dance jig right now, if you all don’t mind.  The fact that its opening is still massive and that it’s guaranteed to make crap tonnes due to it being the only horror movie out for the majority of October (Dracula Untold will bomb, just you watch) are both irrelevant.  Gone Girl came out on top!  Everything’s going to be OK, folks!  Everything is going to be OK.

Other films came out this past weekend, though, so we have to talk about them.  Left Behind, an adaptation of a faith-based book series starring noted religious man Nicholas Cage and directed by former stuntman Vic Armstrong, was resoundingly… you know what?  I am above the obvious joke that everyone else has already made, I draw the line at jokes this easy.  All I’ll say is that Left Behind took almost $7 million for sixth place.  Faring infinitely worse was the “mother of God, this trailer is so offensive and offensively treacly that a crazed homeless man could jump out of nowhere and scoop my eyeballs out of their sockets right now, and it would honestly be preferable to having to see the rest of this trailer or the film that it’s promoting” The Good Lie, which could only manage $935,000 from 461 screens despite Reese Witherspoon being somebody whose name we should all know.

Doing much better than both of those was the Bollywood epic (and I do mean “epic”) Bang Bang!, a remake of that world-famous and widely-revered Tom Cruise/Cameron Diaz vehicle Knight & Day that you all totally didn’t forget about 5 minutes after watching.  In any case, its 271 screens, as part of one of the biggest release roll-outs for a Bollywood movie ever, convinced $1.2 million worth of people to finally try this Bollywood thing they keep hearing so much about, the highest opening of the year for a Bollywood film in the US.  Faring much, much, much worse was the latest film from once bright directorial star Jason Reitman: Men, Women & Children, which has been absolutely savaged by critics, only managed to take $48,000 from 17 screens for a per-screen average of $2,824 which is horrible.  The film might do better when it expands nationwide in a few weeks, but that’s still two straight critical drubbings in the space of 10 months for Reitman.  Dude, what the f*ck has happened to you?

Finally before we get into the full list, Nas: Time Is Illmatic, a documentary about the creation of one of the greatest, if not the greatest, rap albums of all-time and the people behind it, managed to open to $23,200 from 2 screens.  I mention this purely for the reasons of I think that’s genuinely awesome and to tell you to listen to Illmatic right now if you haven’t yet.  In fact, listen to it even if you already know it front-to-back, it’s never not a good time to listen to that album!

This Full List sneaks a uzi on the island in its army jacket lining.

My review, in which I battled against an unrelenting cold and a desire to avoid spoiling anything to tell you why I think Gone Girl is the best film I have seen all year and likely will see all year.  Before anybody shouts “BUT INHERENT VICE HASN’T COME OUT AND CHANGED ANYONE’S LIVES YET” or some such like, UK release dates mean that films like Inherent Vice don’t make it over here until January because Americans just can’t get over that one time we forcibly colonised them.  In any case, no film has made me as excited about films and cinema and going to the cinema this year as Gone Girl did.  It’s going to be divisive, but I f*cking adore it and, for me, it’s the bar to clear for everything else this year.

Fine, I guess I’ll see this tomorrow or whatever.  I’m probably going to hate it, but at least then we’ll all know together!

A 28.1% drop between weekends, which is excellent.  Now, yes, considering the soft opening, that’s still a bit too much of a drop for my liking, but it’s actually really excellent.  Why?  Well, again, stop-motion animated films open soft anyway and a near 30% drop is rather expected between weekends for them, it’s better than ParaNorman’s near 40% plummet two years back and is equal to the fall that Wallace & Gromit: The Curse Of The Were-Rabbit took between weekends.  Boxtrolls will pass Frankenweenie by Friday in terms of total domestic grosses, it’s doing well overseas, and it may close closer to Tim Burton’s Corpse Bride than initially thought.  Overall, things are going to turn out alright for Laika.  I’ve got a good feeling about this!

OK, then, Friday, bring on The Maze Runner.  I’m ready to give it a fair shot.  My expectations are low but my mind is willing to give the film a chance to win me over.  This is your shot, Maze Runner.  Impress me.

Yeah, I’ll just stick to watching The Leftovers, is that’s alright with everyone.

7] This Is Where I Leave You

So… have we all come around to Arrested Development Season 4 yet?  Granted, I haven’t watched it since it came out (I have been busy, but I’d like to have a run back through all of Arrested Development yet again some point soon), but it fulfilled pretty much all of my expectations when I saw it; I spent pretty much three straight days in varying levels of hysterics with it.  That made my going online and seeing the bile-filed reception the season got from most people rather perplexing.  I mean, sure, it’s not as good as Season 2, but I ask you what else is?

Can you tell that I’m really reaching for stuff to talk about with regards to this film, cos I want to hold off on making any judgements until I’ve seen the thing for myself?

So, in preparation for finally seeing this in the very near-future, I watched the original over the weekend.  It’s an OK film, does exactly what it promises to do and not much more but I’d be lying if I didn’t admit that it did work for small stretches at a time.  It felt very much like a film that’s been pulled out of time and released in the early 2010s, specifically a time between 1993 and 1996.  Still have no idea what they can do for a sequel, mind, besides hit the exact same beats this one did but with diminishing returns.  I guess I’ll find out soon.

9] Guardians Of The Galaxy

Well, it’s been an incredible 10 week run, but it’s time to say goodbye to the Guardians Of The Galaxy.  Next week sees the release of a sh*tty looking Dracula movie, an abysmal looking live-action Disney family film, and a mediocre looking Robert Downey Jr. starring piece of award bait.  But it’s not the quality that’s the point here, it’s the fact that they’ll be new films and that Guardians will be an 11 week old film that will hit home media in exactly two months from now.  Ah, well, it’s been fun!  Let’s play it out, shall we?

Dropped Out: A Walk Among The Tombstones, Let’s Be Cops, Teenage Mutant Ninja Turtles

Callum Petch never sleeps cos sleep is the cousin of death.  Follow him on the Twitters (@CallumPetch)!