A series where the Failed Critics look back on a particular decade in the world of cinema, choosing their favourite films from each year of that decade

My plastic surgeon doesn’t want me doing any activity where balls fly at my nose.

Less of a high school movie and more of a religious experience, Clueless charts the coming of age of me, and many other women now residing in their early thirties and still hopelessly in love with Paul Rudd. Meanwhile the twenty-something cast who played the students are somewhat older; Cher’s best friend Dion (actress Stacey Dash) turns 48 in a couple months. “Old people can be so sweet!”

Loosely based on Jane Austen’s Emma, the cute but selfish Cher Horowitz (Alicia Silverstone) realises that tis a far far better thing doing stuff for other people, and sets out on a mission to makeover, match make and mend herself, her friends, and the wider Beverly Hills community. A soundtrack of cheesy power ballads, maudlin cry baby music, and even a performance from The Mighty Mighty Bosstones. And a wardrobe that anyone who didn’t look like Alicia Silverstone would struggle to pull off, no matter how many different white shirts they tried under their knitted tank top. It’s been argued that Mean Girls had a bigger influence than Clueless on popular culture. Whatever. 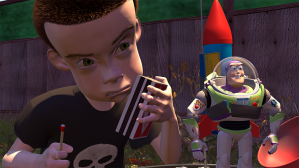 The word I’m searching for, I can’t say, because there’s preschool toys present.

I know. I tried to go a single year of this decade without picking an animation, but come on! You try not picking Toy Story. While Disney’s early nineties run of classics came to something of an abrupt end in 1995, with the release of historical Native American romance drama Pocahontas, a little known studio called Pixar turned up and blew us all away in the time it took Tom Hanks to say “Pull my string! The birthday party’s today?”

A stellar supporting cast including a shy dinosaur, a slinky dachshund, and a self-assured piggy bank. Barbie was originally intended to join the toy box as Woody’s love interest, however Mattel initially refused to license the character. So instead Woody hooked up with a porcelain figurine of Bo Peep, voiced by Annie Potts (Ghostbusters receptionist Janine Melnitz). This freed up Barbie for a fantastic guided tour of Al’s Toy Barn in Toy Story 2 and, more importantly, warranted the arrival of Michael Keaton’s outstanding take on Ken in Toy Story 3. Some things are just meant to be.

The first animated film to be nominated for a writing Academy Award. The start of genuinely one of the most flawless movie trilogies of all time.

I do what I do best, I take scores. You do what you do best, try to stop guys like me.

Proof that you shouldn’t get married without the ability to communicate via secret hand gestures. Most unnecessary inclusion of Val Kilmer on a film poster ever. Al Pacino saying “She’s got a GREAT ASS!”. Thanks to the dangerous combination of being an action movie and being set in LA, Heat was (to use Clueless terminology) brutally rebuffed by the Academy, picking up not a single Oscar nomination. Nonetheless, it remains almost 3 hours of crime thriller bank heist brilliance.

The first collaboration of Al Pacino & Robert De Niro in the same scene (both having previously starred in The Godfather Part II without sharing screen time). Creator Michael Mann describes it as “two protagonists…in deadly mortal combat with each other, (who) at the same time have a high regard for each other”, and based the relationship on the experiences of a real life Chicago cop from the sixties. Get Kilmer off the cover art though, seriously. He made Batman Forever the same year, for crying out loud. And then he celebrated by coming to Leicester for the premiere. No, not Leicester Square, actual Leicester.

Long term readers will, of course, have already seen Heat, after I instructed you to watch it on TV last April. One of the films I most enjoy pretending I am in, while doing banal things like walking down the street, and entering banks without robbing them.

Welcome to Music Town, may I service you?

In a lifetime, you’ll get maybe a handful of films that really encapsulate you at various ages. Empire Records is my teen angst era. When I wasn’t hanging around the second hand cd stores of Leicester, or writing A level essays on Sir Robert Peel, I was watching this. And while I didn’t necessarily share their drug habits, mental health issues or compulsions to sleep with aging pop stars, I was all about their inner turmoil.

Another coming of age tale, this time set in the independent record store of my very dreams. Anthony LaPaglia and said bunch of angsty teens (including Renée Zellweger and Liv Tyler) provide the public with music, and attempt to avoid corporate takeover. All the plaid skirts, baggy pants and swearing you’d expect from early nineties youth. With a soundtrack as eclectic as a movie set in a record store should be – this is the film that introduced me to Dire Straits’ Romeo & Juliet, for crying out loud.

In their wisdom, Warner Brothers made the only available version of the DVD a ‘Special Fan Edition’, adding 16 minutes of additional footage, and ruining the flow of the entire film for anyone who knew it off by heart having watched the VHS copy every morning for six months and calling it study leave.  I could be a little over-emotionally invested in this one, to the point where I would erroneously rank it above the first on screen cinematic alliance of Al Pacino and Robert De Niro. But I doubt it.

Is that the one about the hooker with dysentery?

When Dan Hedaya wasn’t playing Cher’s litigator father in Clueless, he was the LA cop whose messy office had an unexpected role in a drug deal gone bad. Starring an incredibly youthful Kevin Spacey, with brilliant support from, among others, Pete Postlethwaite as terrifying ice cold lawyer Kobayashi, and Benicio del Toro as the truly captivating Fenster. Set in the aftermath of a ship fire, and told via a police interrogation and a series of flashbacks, The Usual Suspects is the story of a police line-up, and a Turkish criminal mastermind.

The screenplay won both the Oscar and the BAFTA, and the Writers Guild of American ranked it number 35 in their 101 Greatest Screenplays ever written. The very epitome of a twist ending. I’d love to be able to play the piano, but only if I could be proficient in certain songs (I Guess That’s Why They Call It The Blues, Don’t Stop Me Now, Piano Man). Similarly, if I was going to be a screenwriter, I’d want to be churning out stuff of this quality on a semi regular basis. Imagine being the guy who sits down and writes Keyser Soze. I’m not even worthy of writing this two paragraph review of that writing. I should have just picked Bad Boys.