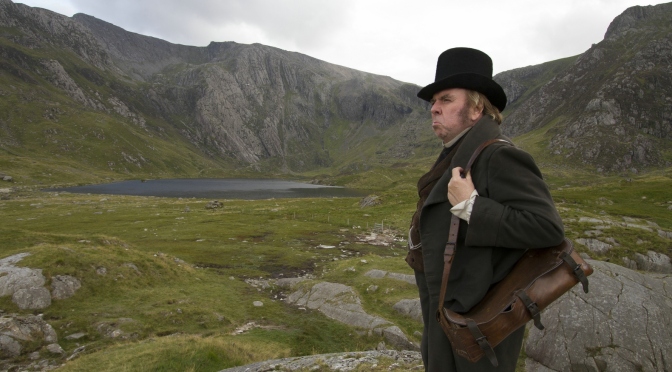 To anybody even remotely familiar with my writing in the past, or who knows the kinds of films I enjoy, I think it’s fair to say I would not take offence to anybody labelling me as a philistine.. within context, of course. I love a wide variety of movies. You know those annoying people you sometimes meet and when asked “so what kind of [music/film/novel/other-small-talk-related-topic] do you like?”, they rather indifferently respond “oh, anything really”. Well I apologise in advance because I do pretty much like anything when it comes to films. The only caveat being it has to be good.

Of course, I don’t like every film I’ve seen. But  I like to think that I know a little bit about the films that I do like. Hell, even the books I’ve enjoyed and their authors I’d like to think I know a little bit about them too. However, when it comes to painters or other artists, I’m afraid I belong to the great unwashed masses. To coin a phrase (that Google is struggling to attribute to any particular individual,) “I may not know art, but I know what I like”. Similarly, I may not know JMW Turner, but I know that I like director Mike Leigh’s Palme d’Or nominated period drama based on the final 25 years of the titular character’s life.

‘Pointing out the obvious’ alert! There’ll be three main types of people who will go to see this film: those who know a lot about Turner and his incredible body of work, looking to make sure Leigh has done him justice; those who know a little about him, who he was, what he painted, the time he lived in, and this movie will fill in the gaps; and then there’s the ignorant fools like me who are basically seeing this because of either the cast, directors, or to see what all that fuss at the Cannes film festival was about. At a push I probably could’ve told you he was around in the Dickensian / Victorian era, painted landscapes, and that the Turner Prize is named after him. That’s about it. What’s great about this film then is how it immediately grabbed my attention and held it for virtually the entire 150 minute run time. It wasn’t dumbed down or patronising in the slightest, yet neither was it too high-brow nor intellectual. The balance was just about perfect.

Timothy Spall’s ‘Best Actor’ performance as ‘Billy’ Turner is a fitting tribute to a genius artist. As he grunts, groans and ‘harumph’s his way through a quarter of a century of Turner’s life, you really get a sense of who the man actually was beyond just a signature at the bottom of a painting of boats. What he was like in his private life, how he interacted with his peers and fellow painters, all of his flaws and traits that he possessed, they are all brought to life stunningly by a truly excellent performance. He wasn’t alone. Dorothy Atkinson, Paul Jesson, Marion Bailey and Martin Savage were all worthy of mention for the part they played in bringing this story to the silver screen.

Whilst that side of the film might not have been a problem for me personally, I can’t help thinking, if only I’d have known just a little bit more about him prior to sitting down in that uncomfortable cinema seat for two and a half hours, I’m sure I would have gotten a lot more out of it. If only I’d have known more about his paintings and art, then there’d have been a whole other dimension opened allowing me to enjoy the film on a completely separate level. All I could do in this regard is watch and listen to the cultured spiffing what-what professorial gentlemen types of Oxford who I happened to be sharing the cinema screen with. With my stereotyping of the kind of crowd there to see an art-house movie, I could hear audible gasps at times for (what I presume were) paintings that they recognised were being brought to life before our eyes. I wish I could tell you which paintings specifically, but even to a philistine like me, it looked breathtaking. And also painstakingly detailed.

Dick Pope was the cinematographer for the film and won the Vulcan prize for technical artist at Cannes – he’s also been nominated for a BIFA this week – and deservedly so because it is an absolutely gorgeous movie. Mike Leigh should almost definitely get credit too for that, but between them, they’ve made early 19th century Britain look beautiful. Well, between them pair and Turner, of course!

In a lot of ways actually it reminded me of last year’s The Great Beauty. Turner was just a larger than life man who had the extraordinary ability to observe the staggering beauty of the world around him, whilst also participating in it. He’s a ship being thrashed by the waves of one of his own seascapes. He’s not portrayed as a saint, nor is he particularly debauched. He’s just a man with his own issues, but that’s all he is. A man with a notepad and a pencil.

It feels like I’m nitpicking in talking about any negatives associated with this film. It’s a film that will take a while for you to digest everything that has occurred, mostly because through the course of the run time, a lot of subtle changes take place. One thing that I noticed immediately after leaving the cinema on my drive home was that I didn’t really get a sense that 25 years had passed. Obviously you can tell time is passing as events unfold, but how much time I was never certain. However, that didn’t effect the quality of the movie. It was inconsequential in the scheme of things.

Ultimately, it’s a moving, beautiful story that looks as good as you would hope. Fans of Turner will presumably enjoy it as much as, if not more so, than the layman like me who just wanted to see a good film. Which, it is.

Mr Turner is in cinemas right now. You can hear Owen review the film on the next episode of the Failed Critics podcast.