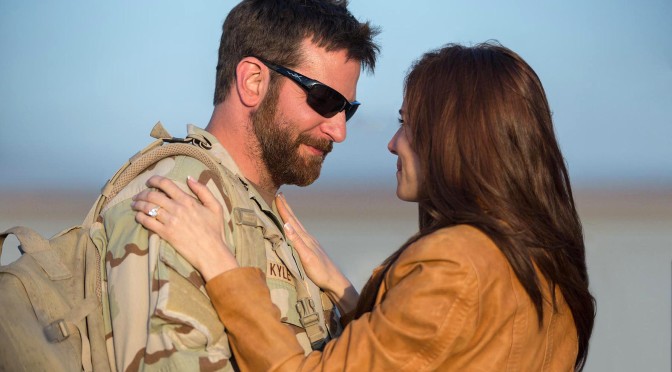 By design, American Sniper has nothing to say which makes it a waste of both my time and yours.

Like it or not, a war film is inherently political.  The act of war is inherently political and ideological, so a war movie, by extension, has to be about something.  A “just the facts” war movie is a documentary and even then many have things to say about war and/or the people being forced to fight in it – Restrepo, for example, ends up making a sharp point about how war can affect the men and women forced onto the front lines, and the absolute mess that comes from having to establish relations with citizens whose language you don’t speak and who do not trust you at all, purely by stepping back and “just showing the facts”.  A non-documentary film, though, cannot subscribe to that and needs an overall point to power it, otherwise it’s just wasting the viewer’s time.  Something to say about the war, about PTSD, about politics, about the men and women who pull the triggers, something, anything.

American Sniper, the newest film from director Clint Eastwood, has no point.  By design, it has absolutely no point to make.  When faced with the task of adapting the life story of Chris Kyle (here portrayed by Bradley Cooper), a decorated war hero who went on four tours of Iraq between 2001 and 2009 and whose official recorded kill count of 160 makes him the deadliest sniper in US military history, Eastwood and the film’s writer, Jason Hall, have opted to simply print the legend.  “Just the facts.”  Consequently, American Sniper is a film that goes out of its way to avoid making any point whatsoever, which is the single worst possible thing it could do.

See, again, war films are inherently political.  War films about the Iraq war, one of the most political wars of at least the last 30 or so years, are especially inherently political.  The conflict is so muddled, so ideologically driven in such different ways, so tied to the current world landscape, and such a mess that any film made about it or set during it is going to make a point regardless of how hard it tries not to.  American Sniper, therefore, most resembles the Modern Warfare-era Call of Duty games.  Those are war games set in the Middle East that just want to be fun video games and not make any major ideological points.  However, by aiming to do that, they do, in fact, end up taking a side: that side being jingoistic pro-war slightly xenophobic glorification, insidiously so.

And that’s what American Sniper ends up doing.  Without even meaning to, it glorifies the war, its subject, and the murdering of any being who even dares resemble a terrorist because of its desire to try and make a “just the facts” film.  Because there can be no such thing as a “just the facts” dramatisation because a film has to decide and construct certain things that will get in the way of “just the facts”.  A filmmaker will bring their own personal baggage and ideologies to a film and that will influence them on what they end up doing, consciously or unconsciously.  So Kyle’s shots are always justified, the American military’s response is always justified, and the war is always justified because the film refuses to linger on any of the aftermath, or to characterise any of the Iraqis as anything other than Western-hating insurgents – save for one Sheik which is the film equivalent of “I can’t be racist, one of my best friends is Iraqi!” – because Eastwood and co. are all trying so hard to avoid making a point.  The irony of a film trying so hard to avoid saying anything about the Iraq war ending up saying something is not lost on me, but is completely lost on the film.

Then there’s the character of Chris Kyle himself who, once again, the film completely refuses to try and say anything about.  Kyle is a man with a ridiculously long kill list, who went on four tours, had a loving wife (played thanklessly by Sienna Miller) and family back home, and who struggled with severe PTSD upon finally remaining at home… and yet, despite spending two hours and ten minutes in his company, the film has nothing to say about the man.  Nothing about his upbringing, nothing about his time overseas, nothing about why he keeps re-enlisting despite having a loving wife begging him to stay home, nothing.  It utterly refuses to dig into his psyche and figure out why he does what he does, instead presenting the things he does as stuff he did.

This, ultimately, means that the film also fails as a biopic about Chris Kyle.  Bradley Cooper is trying really hard – in a relaxed manner that isn’t straining for awards consideration like Eddie Redmayne was in The Theory Of Everything, another film with nothing to say about its subject – to find the character of Chris Kyle and what makes him tick, but the script gives him next-to-no material to work with on that front.  Occasionally, we will be given the slightest slither of an insight into Kyle – there’s a sequence late on where he quietly begs a child he has lined up in his sights to not go for the recently dropped RPG, as well as a very understated scene in a bar when he returns home early – but then we’re back to this cold, distant, closed-off look at what he done did, with pretty much every other time that the film threatens to question what makes him tick – usually signposted by his wife asking him point blank “Why do you keep going back?” – immediately cutting away before anything can be revealed.

As a result, the extent of the film’s insight into what made Chris Kyle the man he was boils down to “When he was a young boy, his dad took him hunting and gave him a talk about being a man who stands up to bullies.  Also, he’s just such a goddamn patriot.”  And maybe it really is that simple.  Maybe he really was just a man who wanted to save the lives of his fellow and prospective fellow soldiers, and maybe he really was just a man who didn’t question or self-reflect on his actions.  There is a difference, though, between a portrait of a man like that and a film that doesn’t want or can’t be bothered to reflect on a man like that, and American Sniper is the latter.  This is a film that relegates Kyle’s fight with PTSD to a barely five minute montage near the end and doesn’t have the guts to spend any time on the circumstances leading up to and surrounding his (off-screen) murder, because those would risk having to actually probe Kyle psychologically and that goes against the apparent “just the facts” edict that seemingly informed the whole production.

American Sniper is not a badly-made film – there’s Cooper’s aforementioned performance, Eastwood is able to extract some decent tension out of some scenes, and there are times when the film threatens to start on the road to making a point – save for a prominently featured plastic baby standing in for a real one, but it is a completely pointless one.  Yes, it insidiously promotes and glorifies a jingoistic patriotic attitude towards war, but that’s completely by accident.  The fact is that American Sniper has nothing to say about war.  Not about Iraq, not about the men and women who fought there, not about its subject Chris Kyle, not about the moral quandaries behind his actions and most certainly nothing about PTSD or his post-war life.  It has nothing to say and the fact that it actively goes out of its way to avoid having an intentional point or something to say is infuriating.

In other words, it’s two hours and ten minutes of active squandering of anything interesting to say.  It is literal timewasting that inadvertently pushes a glorified pro-war viewpoint.  If it were open about it, I’d still disagree with the film, because of my own staunch anti-war and anti-violence beliefs, but I’d at least respect it for being open about it and saying something.  Instead, American Sniper is a film that runs out the clock for two hours and ten minutes of admittedly well-made pointlessness.  That offends me.

Callum Petch likes to destroy all the things that bring the idiots joy.  Follow him on the Twitters (@CallumPetch) and listen to Screen 1 on Hullfire Radio every Monday at 9PM BST (site link)!