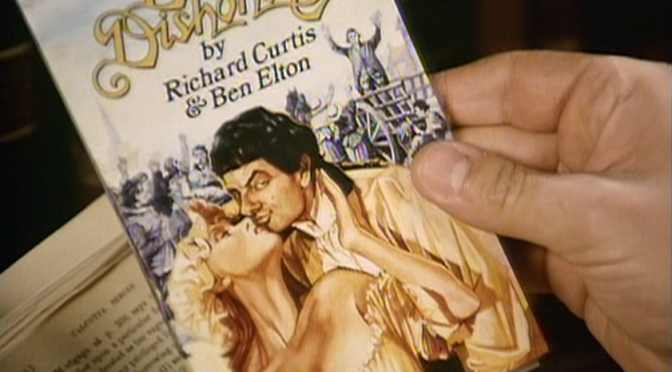 In the latest entry to our 100 Greatest TV Episodes series, we’re introducing Nicholas Lay, a new guest writer to the site, who’s inducting one of the most intelligent episodes from the BBC classic comedy, Blackadder.

In the spirit of the frantic general election that last week, as per usual, made a mockery of the political and social system in the UK, it seemed only natural that my contribution to Failed Critics 100 Greatest TV Shows should be the timeless send up of British politics that is the opening episode of the late 80s sitcom, Blackadder the Third. While II and Goes Forth are arguably stronger seasons, certainly in terms of consistency, and are no doubt more popular, I find it difficult to hold any single episode in higher favour than Dish and Dishonesty. Set during what could perhaps be considered a ‘brave’ time period selection – the turn of the 18th/19th century British Regency (a historical period lodged primarily in further education compared to the primary school-taught, everyone-knows-a-few-facts-about-them Elizabethan and WWI periods of II and Goes Forth respectively) – the episode features some of Richard Curtis and Ben Elton’s finest, altogether smartest writing, terrific performances and comic timing across the board, as well as probably my favourite Blackadder sequence of all time.

Right off the bat there are jokes aplenty regarding the rather backward electoral structure of the age, with facts presented that could essentially produce the humour out right due to the almost tragic nature of their genuine existence. Curtis and Elton of course sprinkle their delicious sense of exaggeration on virtually everything, but as is the case throughout Blackadder the comedy stems from the reality that, while ridiculous, each social and political aspect ridiculed to the extreme isn’t actually that far away from the truth. Within the first five minutes or so we’re treated to a brief history of the unfair manner of voting procedure (“Look at Manchester…population, sixty thousand; electoral roll, three”), an introduction to the running joke of an overly adolescent Pitt the Younger, and the outrageous class divide as depicted by Blackadder himself, who describes MP Sir Talbot Buxomley’s interests as “flogging servants, shooting poor people, and the extension of slavery to anyone who hasn’t got a knighthood”.

Although helped by the fact that period pieces tend to stand the test of the time with greater success than their contemporary cousins, Curtis and Elton were evidently masters of the sitcom set up of their day. Immediately punching out lines and gags of this ilk over and over again, they really allow the old day BBC studio audience to get their teeth into things from the off, thus pulling the whole thing off spectacularly well throughout. Incidentally, the episode is a fine example of a time when a live audience laughter track genuinely did drive and enhance the comedy, from the perspective of both the working actors and the end user, so to speak, in the form of the audience at home.

Working in tandem is the superb delivery provided by the cast, led by Rowan Atkinson’s legendary title character, whose bitter sense of both curiosity and utter loathing alike manifest themselves marvellously with each straight close-up of his subtle, completely apt facial expressions. His calm, permanently sarcastic demeanour in the face of complete buffoonery, both above (Hugh Laurie’s elite thicko, Prince George) and below him (Tony Robinson’s ever-present dogsbody, Baldrick), results in punch line after spot on punch line. Laurie excels opposite as the brain dead Prince, the non-state related concerns of whom remain consistently at the forefront of the comic proceedings (“Socks are like sex…tons of it about and I never seem to get any!”). The nauseating guest characters are as close to perfection as one is likely to find in sitcom history, with Dennis Lill’s grotesque, flushed elitist Buxomly’s brief cameo matched by the depiction of two-time Prime Minster Pitt the Younger, played wonderfully by Simon Osborne. Like the “Darling” gag during Goes Forth, the joke that the PM is a mere teenager is simple but genius in both subsequent connotation and all round execution, as he continuously spars with Blackadder in fantastically immature, highly patronising fashion.

The highlight of the episode is the development of the by-election held in the fictional corrupt rotten borough of Dunny-on-the-Wold, discussed first by Blackadder and the Prince (in no other context could the lines “a small hen, its late forties” and “window tax” be delivered with such understated aplomb and work so damn well), before culminating in the eventual election declaration. One of the all time great moments of British television, the fourth wall-breaking election result – presented as a BBC-type event with contemporary political commentator Vincent Hanna speaking directly to the camera/audience – is a masterpiece of witty political satire. From start to end it precisely dissects the sometimes seemingly insane practice and nature of politics in the late 18th/early 19th century, alongside modern day politics and the ugly, concurrent themes of power, wealth, and corruption. The sight of Prince George holding Colin the dachshund and approving Mr. Hanna’s acknowledgement of the beast sets the tone for a scene in which each scenario, portrayal, and line is pure, side splitting gold. Baldrick’s old timey version of political “gagging”, Pitt the Even Younger crying to his mother in defeat, the Standing at the Back Dressed Stupidly and Looking Stupid Party’s policy of the compulsory serving of asparagus at breakfast, and Mr. Hanna’s Country Gentleman’s Pig Fertilizer Gazette media outlet are just some of the standout moments, all held together by Blackadder’s treacherous, completely transparent rigging of the vote. Never again did a single scene have my heavily inebriated weeknight YouTube-watching first year history university student-self on the floor quite as long as this.

A momentous, everlasting piece of British comedy, Dish and Dishonesty opened a season that deservedly won the BAFTA for Best Comedy Series in 1988, with the episode itself a cornerstone of its success. The blend of quirky, restricted staging and cynical writing forever associated with the series is at its absolute strongest here, a factor from which the cast rose to the occasion to produce a practically flawless thirty minutes of television. To any fan of history, comedy or political satire who may have missed it, I couldn’t recommend it highly enough. If you still don’t wish to give it a try, then I say, in the words of Mr. Pitt the Younger, poo to you with knobs on!

The rest of our 100 Greatest TV Episode articles can be found here.