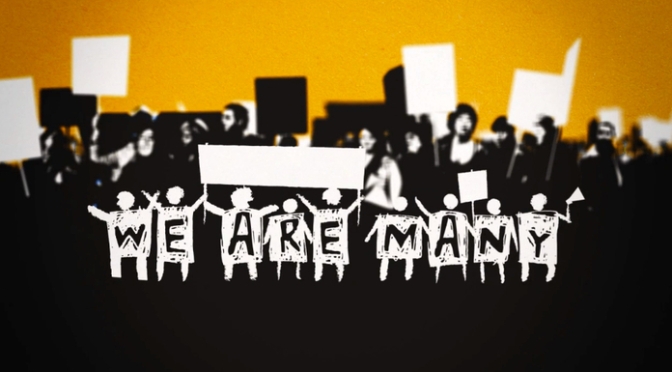 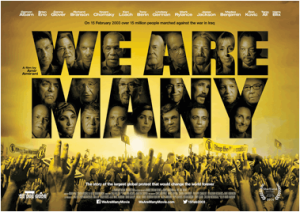 To my politically naïve fourteen-year-old-self, the invasion of Iraq by the United States and her allies, including the United Kingdom, essentially passed in a flash of news bulletins, uniformed discussion, and a general lack of understanding. 20 March 2003 was just another day in my rowdy teenage life, as was the month prior, during which, on 15 February, the largest coordinated global concentration of human assembly in all history took place. Spearheaded and centralised by crowds topping 1.5 million on the streets of London, people the world over joined forces en masse in a peaceful, controlled outcry of protest against the possibility of war with Iraq.

The motivations, construction, execution, and legacy of these gatherings are the primary focus of British-based producer/director Amir Amirani’s new documentary, We Are Many. A study of the ever-developing power of protest, the film centres on the original catalyst for such action in modern times, as well as its enduring results up to and including the 2011 Arab Spring and the recently rejected proposal of western military intervention in Syria.

What could certainly be called a ‘definitive’ discussion on the topic of protest during the opening decades of the 21st century, We Are Many welcomingly encapsulates and conveys a moment in time that deserves to be remembered and passed down through this generation and the next. The impressive scale of verbal and visual coverage conveyed is unprecedented for a major film or documentary dealing with the Iraq War. Working firstly through the build up to the 15 February protests, Amirani then proceeds to delve down into the fascinating, somewhat disturbing manner in which the overwhelming public reaction was somehow lost amongst the mixed political response, resulting in any and all protest slowly melting into the inevitable countdown to war.

Never overbearing and consistently interesting, the film is well edited, paced, and scored. Amirani relays the history beautifully, whittling down his countless hours of interview footage and extremely thorough research to produce a concise, well-reasoned, sometimes genuinely emotional work. An array of diverse techniques is employed to spread out and reel in varying levels of audience engagement, all of which actually come together with remarkable consistency. There’s the constant, subtle development of tension via the ticking calendar, a range of interesting side note anecdotes used to break up the main arc (Antarctica/Mandela/NO WAR), and a simple, brutal juxtaposition between the stark reality of war and the joking, dismissive reception given to it at times by the powers that be. Sometimes the smart, contextual use of a basic raw recording or clip is all that is needed, as is the case with the inclusion of the late British MP Robin Cook’s protest-based resignation speech to the House of Commons. A powerful, emotion-rousing piece of anti-war rhetoric that deconstructs the government’s argument to the point of ironic absurdity, it’s the sort of dormant political moment within mainstream culture that is more than worthy of widely distributed preservation.

It’s formidable stuff from Amirani, who – without getting drawn into celebrity name checking – assembles a bordering-on-epic group of talking heads to help paint vividly the increasingly intense nature of proceedings. There’s researchers, journalists, politicians, musicians, event/committee/association organisers, commentators, veterans etc. etc., with plenty of unique, fascinating insight prevalent throughout, and genuine passion evident in those relaying how events unfolded from the ground up. Unlike some documentaries released twenty, thirty, forty years after the event, We Are Many benefits heavily from being so fresh in the minds of those involved. Rather that simply pressing play on everything at his disposal, Amirani uses this interviewee energy, intercut with his superb archive footage, to weave an immersive, but always-startling true tale.

A great documentary should never assume that its audience is in the know regarding the subject of discussion. On top of this approach there should generally be a healthy level of provocation toward research/analysis-based thoughts and reactions on the part of the audience, outside of what they’re specifically being told. We Are Many does this brilliantly by way of its historical and social commentary, and overall coverage. As someone from my generation – too young to really understand or participate in Iraq-related events at the time – I was not only left with a strong sense of pride in the sheer willingness of my fellow man to project views I now consider myself firmly aligned with, but also found myself in complete awe of how focused and peaceful the whole thing was. Now an adult contemporary of an age in which protests throughout the west are frequently inundated with clashes between rival gangs and political groups, anonymous rioters, kettling and other forms of police aggressiveness, it’s both tragic and inspiring to see how easy it seemed to be once upon a time.

Not exactly life changing, but certainly very necessary at a point in time when protest exists at the forefront of global opinion, and numerous questions concerning the true motivations for the Iraq War remain unanswered, We Are Many is a moving, thoroughly engaging journey through one of the chief high-profile social and political chapters of the early 21st century. With political interest and participation steadily rising amongst young people, a well-made, relatable documentary feature such as this is definitely a useful, welcome shot in the arm. In no way pretentious or deeply complex, but, due to the subject matter, not a piece to be taken lightly either; time set aside to allow full immersion, however you choose to view it, is highly recommended. Timeless in nature, I have no doubt it’ll go on to have a productive future as a pertinent reminder to future generations of the interchangeable, very real themes of war, peace, power, politics, and, ultimately, freedom of speech in the form of protest.

We Are Many will have a live satellite link-up Premiere with very special guests on 21 May, beamed to cinemas around the UK, followed by a nationwide cinema release on 22 May.

3 thoughts on “We Are Many”