In another new article for our 100 Greatest TV Episodes series, first time writer for the site Matthew Latham looks back at one of the most pivotal moments in Joss Whedon’s hugely popular show Buffy the Vampire Slayer. 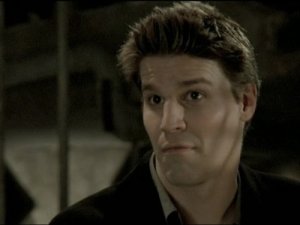 “Growing up is hard”. It’s the clichéd phrase that’s thrown around pretty much everywhere you look. There’s been a lot of TV shows that try to highlight this, but perhaps some get a little carried away in their own spectacle. They can show an over-exaggerated view of teenage life that doesn’t fully exist and creates high standards to live up to. Skins, for example, its first series is brilliant drama series but isn’t an exact representation of teenage life; it’s a character study for Nicholas Hoult’s character. Whilst other teenage shows of the last ten years appear to go for kitsch soapy drama (Gossip Girl and 90210) in niche areas of society.

In every TV generation, a show is born. It alone will be able to take a more mature look at growing up with a more level headed respect for its audience. With relatable characters that are more like the average viewer. In this modern era, the closest we have is probably Awkward (if you finish watching it at the end of the third season), but even that descends into sometimes dodgy soap territory alongside some genuinely smart story-telling techniques. Before then you had Friday Night Lights that explored growing up in the context of a small town environment. There’s also Freaks and Geeks, which was aimed towards adults who were teenagers in the 1980s.

Okay, okay, so shows involving a blogger and football are a tad more realistic than a girl who fights mythological creatures. It’s not exactly My So-Called Life (the quintessential show about growing up) is it? What Buffy had was a clear goal: to show the struggles of growing up and the pressures that go with it; juggling school work, social lives, family, possible jobs alongside the fear of entering the adult world and preparing for it. Buffy throws in a bunch of metaphors involving mythological creatures that still was more relatable than those rich kids with that famous zip code. Felt ignored? There’s an episode about a girl who ended up turning invisible because of it. Pushy mum that wants you to do something that she did as a teenager? There’s an ep for that. It’s more apparent in the first season and the first half of the second, and the episodes aren’t superbly fantastic (and not to mention dated). The show couldn’t keep doing this forever, so it had to get to a point when it risks going for the bigger issues and extended arcs.

Innocence concludes a two-part story that started with the previous episode, Surprise. It’s when Buffy, the show and the character, begin the process of growing up. It has had arc plots before, but this sees a massive turning point in the season arc involving Buffy’s (Sarah Michelle Geller) relationship with the vampire Angel (David Boreanaz). Since the pilot the attraction between them has grown from when Angel mysteriously popped up to give Buffy cryptic advice, and then vanish. Buffy (inevitably) ended up being drawn to him and vice versa before he revealed that he was vampire. Only one with a soul. It transpires Angel used to be an evil git in the past, with this life finally catching up with him after killing a young gypsy woman. Scorned, the woman’s family cursed him with a soul so he would be haunted in an eternal life of guilt.

It turns out that these gypsies had a pretty questionable loophole in that if Angel had a moment of true happiness, then he’d lose the soul. This episode sees the result of Angel losing his soul via sleeping with Buffy at the climax (ha!) of the previous episode. Thus he reverts back to Angelus. Immediately Buffy, her friends and the audience are taken out of their comfort zone. Whatever trace of Angel there was, and what we’ve seen in the past has gone. We meet the real “Big Bad” of the season as Buffy has to enter a war against a man who used to be the man she loved.

“But where is the relatable metaphor?” I (don’t) hear you cry. Innocence kicks off an extended arc which deals with the boyfriend that you sleep with and doesn’t call or seem interested in. Angel turns into the kind of guy who leaves after “doing the deed”, breaking Buffy’s heart in the process. Geller has to do a lot here, and she pulls it off effortlessly. The first scene between Buffy and Angelus (the name used to differentiate between him and Angel) sees him being incredibly crude; commenting on Buffy’s sexual prowess and cutting her down emotionally. It’s a heart-breaking scene and it helps you get on Buffy’s side immediately. The mystical events are a backdrop to a conversation that could happen in real life or any other “straight” (with no-fantastical element) dramas, as Buffy has to come to terms with the guy she thought she knew has gone. In his place is…well, a jerk.

And what a jerk Angelus becomes. Boreanaz is a delight, revelling in the fun as this darker incarnation of Angel. The previous episode introduced the show’s usual “Demon of the Week” villain in the form of The Judge, a being that “burn humanity” out of people. It’s very much a plot device that’s clearly set-up for the scene where The Judge tries to burn a recently de-souled Angelus but doesn’t. It’s another scene that whilst convenient, the writing is indicating that the show is different now. Characters are different. Angel is gone and we’re using every viable method we can to show this.

As the drama around Buffy and Angel’s relationship crosses its own Rubicon, other characters find significant changes within their own arcs. Willow (Alyson Hanningan) discovers that Xander (Nicholas Brendan) and Cordelia (Charisma Carpenter) have…well, whatever the hell they’ve been doing. Alyson Hannigan gets one of her many great moments in the show here, laying into Xander and delivering the breaking: “it means you’d rather be with someone you hate, than be with me.” But it’s good in the long term, because in Willow’s quest to “even the score” she offers a make-out session with new love interest Oz (Seth Green) in a van whilst the Scooby Gang (the name given to Buffy’s friends) are sneaking into an army base. In perhaps the best piece of writing where you’ll find yourself loving a character, Oz replies with a “no”, spotting the reasons behind it in one of his better moments in the show. Even Giles (Anthony Steward Head) gets his own place to shine, acting as the father figure Buffy deserves and showing his loyalty to her in despite of the revelation that his girlfriend Jenny (Robia La Morte) was part of the Gypsy tribe that cursed Angel (Though I’ve always felt that they may have been a little too harsh towards Jenny).

The writing is incredibly strong in this episode and you can pin that down to Joss Whedon, the guy behind those recently successful Avengers movies you may have heard of. I often recall a quote he once said; “The two things that matter the most to me: emotional resonance and rocket launchers. Party of Five, a brilliant show, and often made me cry uncontrollably, suffered ultimately from a lack of rocket launchers.” This sums up his attitude to the show: the emotional relatability is there to see, but to have that impact you need to make sure you have something exciting alongside it. This works from the opposite angle as well, as action sequences need a layer of emotional resonance for the audience to be attached to them.

In terms of Innocence, this is represented by an actual rocket launcher. It’s as if Whedon wanted to be subtle by not being subtle at all. It’s what her friends break into an army base to get; as “any weapon forged” can’t kill The Judge – so they get one that was made in a factory instead. It’s a very cool visual, one that will linger in the title sequence for seasons to come. The climax of the episode sees a fight between Angelus and Buffy in which she can’t bring herself to kill him, so she kicks him in the nether regions. It’s a great thematic end to the episode as the power that Angelus took via that conversation in his apartment is transferred back to Buffy. It isn’t much, but it’s enough. “Give me time,” she tells him.

Points of no return have been crossed. With Buffy’s loss of innocence, the show follows suit and the rest of the season spirals into a darker turn. Buffy’s mother asks her what she did for her birthday, and she replies with one word: “older”. Buffy had to grow up, and so did the show. Sure, the show would still dabble in the stand-alone metaphorical tales (like the late season episode Go Fish), but there was now more layers of characterisation, characters would react to situations differently. The show’s mission statement was in full effect: this is what Buffy the Vampire Slayer is capable of.

It isn’t an episode to watch in isolation; nor is one to introduce people in the show. But it’s a pay-off for those that stuck with it, accepted what the first season is and started to fall for the characters. The ramifications of this episode end up affecting the entire run of the rest of the show, and forms the backbone of the later Angel spin-off. If that doesn’t show the episode’s case for one of the best forty-five minutes of TV ever, then I don’t know what will.

The rest of our 100 Greatest TV Episode articles can be found here.