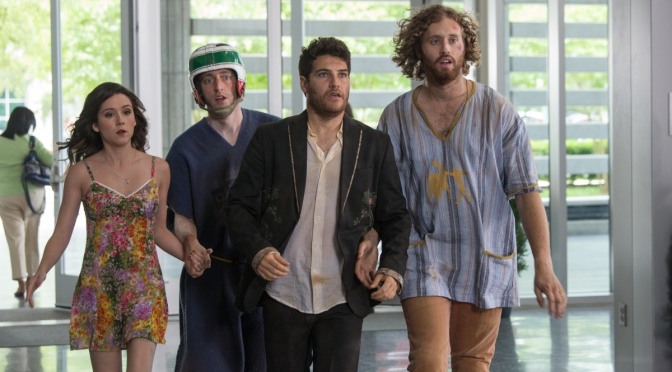 Search Party is the worst kind of terrible comedy. 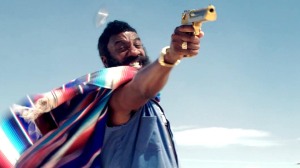 Search Party begins at the bachelor party of one Nardo (Thomas Middleditch).  In just a few hours, he will be getting married to the love of his life, Tracy (Shannon Woodward), but right now he’s getting high in a van with his two best friends – straight man business guy Evan (Adam Pally), and loser slacker Jason (T. J. Miller).  During this session, he experiences nerves about his impending nuptials which Jason, who doesn’t like Tracy for whatever reason, takes to mean that Nardo just plain doesn’t want to get married.  He therefore crashes the wedding, leaving Nardo heartbroken and Tracy jetting off to Mexico to experience their honeymoon alone.

The next evening, Jason gets a call from Nardo.  Nardo went to Mexico to try and find Tracy, but was promptly car-jacked and “tuxedo-jacked” and so now is stranded in Mexico, naked, with no car, no cash, and no way of getting to Tracy or back home.  Jason promptly grabs Evan – since he’s not allowed to drive Evan’s company car without Evan present – and the two begin their race down to Mexico to try and get Nardo back unharmed.  Preferably before 8am at that, as that’s when Evan has a big meeting with his boss (Lance Reddick) that could land him a big promotion.

I wrote down that entire plot synopsis because I wanted to make it really, really clear to you about just how desperately Todd Phillips-y Search Party is trying to be, and especially like Due Date.  Conveniently, Search Party is the directorial debut of Scot Armstrong, who has been one of Todd Phillips’ closest collaborators, having co-written scripts for Road Trip, Old School, Starsky & Hutch, and The Hangover Part II, so it makes sense that Search Party plays like a bad Todd Phillips movie.  I mean, that’s a redundant descriptor, as pretty much all Todd Phillips movies are bad movies, but the point still stands.

So, it’s a bro-comedy, and comes with everything that you’re expecting from a modern day bro-comedy.  Lots of references to and smoking of weed, racial and just plain racist stereotypes because “ha ha, aren’t non-white people hilarious for being non-white?”, casual sexism verging into outright misogyny at points, painfully laborious set ups for extended setpieces that are not as inherently funny as the film’s writers thought they’d be, a wet-blanked nagging love interest for our straight man (Alison Brie) whose sole purpose is to roll her eyes at the antics of the stupid boys, a cheap and stunningly incompetent action finale, the man-child best friend being the kind of hateful imbecile that makes you wonder why anybody would ever voluntarily hang around this bell-end, terrible CGI, a vomiting donkey…

That’s not why I hate Search Party, though.  Bro-comedies aren’t my thing, but they normally just bore me and cause me to sigh by this point.  They’re not for me and, although I do believe that human society would be a million percent better off by the eradication of their existence, they don’t annoy or offend me anymore, unless they are really atrociously offensive.  And although Search Party is rather offensive – women are either evil, bangable background candy, or personality-free prizes for our cast, Mexicans are lazy or threats to our heroes, JB Smoove’s evil crazed drug dealer is exactly what you’re imagining the result of that description to be – and really poorly made – continuity errors abound everywhere, certain shot choices and cuts make no sense, I can feel the cheapness radiate from this film’s entire being – it’s not offensive enough or incompetent enough to draw my ire by itself.

No, my ire is drawn from the cast.  Specifically, this cast list is a veritable dream team of stars from cult sitcoms from the past half-decade who have long deserved a shot at movie stardom.  Our leads are Adam Pally from the cruelly short-lived Happy Endings, Thomas Middleditch from Mike Judge’s Silicon Valley, and T. J. Miller who is also from Silicon Valley and whose unmistakeable voice has popped up in the margins of pretty much every single animated project released since 2010.  There’s also Alison Brie from Community, Krysten Ritter from the also criminally short-lived Don’t Trust The B—- In Apartment 23, Jason Mantzoukas from The League, JB Smoove from 30 Rock and Chris Rock’s amazing Top Five, and Shannon Woodward from the quietly great Raising Hope.

This is a stacked cast of astoundingly talented comic performers who killed it on their respective shows, have shown talent in guest spots elsewhere, and who deserve their breakthrough moment and an opportunity to headline a damn good comedy feature.  The fact that they’ve been brought together for one movie is ridiculous and should, in theory, produce a film of non-stop hilarity.  Hence my ire, because this is a cast that has been given absolutely nothing to work with.  Like, there is almost literally nothing in this script that constitutes an actual joke and multiple, multiple characters get quite literally nothing funny to do.  Alison Brie is given no jokes whatsoever, inexcusable, and Lance Reddick’s role could genuinely be replaced by a balloon tied to a wet floor sign and you’d get the same effect.

So this isn’t a case of a cast not being able to turn mediocre or worse material into something decent through delivery and sheer force of will, like the best comic performers can, this is a cast trying to make something out of nothing and coming off as incredibly desperate as a result.  Nobody could make this work.  You could give this script to an in-their-prime Bill Murray, Jim Carrey, and Robin Williams and you would still get the exact same results!  Garfunkel And Oates – the musical act of Riki Lindholme and Kate Micucci – show up at the beginning and end of the film to sing two of their own songs and they are far, far, far funnier than anything the film itself comes up with, and their whole thing is “Aww, look!  We’re two sweet girls singing cute songs on ukuleles and acoustic guitars PUSSY VAGINA PUSSY VAGINA PUSSY VAGINA DICK DICK DICK”!

And what gets me, what REALLY gets me, is the fact that this cast will not be given this chance again, and I’m not just saying that because Universal have delayed the film’s release in America for close to a year now and are dumping it in pretty much every other country for the time being.  This cast will not be brought back together exactly like they were here for any other film, not to mention the fact that at least half of these folks’ movie careers are about to hit massive brick walls as a result of this.  Let’s Be Cops was another terrible film that squandered excellent sitcom actors who deserve a chance to prove themselves in a big screen film on completely garbage material, but that film was a success and I have a good feeling that Jake Johnson and Damon Wayans, Jr. will be brought back together multiple times in the future to try again and again, hopefully on scripts that contain even trace amounts of wit and humour.  But that’s not happening with these folks.

That’s why Search Party is the worst kind of terrible comedy.  It’s the kind of terrible comedy that ensnares a whole bunch of incredibly talented and potential-filled comedic actors and actresses in its web, and then traps them in an extremely lazy script that gives them nothing to do except stumble through the motions of a dreadful bro-comedy, whilst their attempts to try and make something, anything, funny happen in a script that has no funny just makes them look pitiably desperate and hopelessly out of their depth.  That’s why Search Party angers me, because nothing angers me like talented people having their big chance and potential actively squandered by utter shit.

There is a very good reason why you probably haven’t heard of this film prior to this review.  Trust me, you are better off not seeking it out.

Callum Petch has sucked more blood than a backstreet dentist.  Follow him on the Twitters (@CallumPetch)!