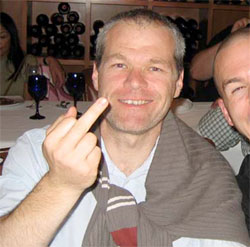 What happens when you reunite the filthy minds of [The Mirror’s film correspondent] Paul Field and Andrew Brooker on the same podcast as Steve Norman and Owen Hughes?

If you guessed “clean, mild mannered discussion on various films in the cinema” then you’d be wrong. This episode is explicit with a capital E. And a capital X, P, L, I, C, I and T as well. You have been warned! Although there are still plenty of films discussed this week.

Together, in-between the carnage, the team manage to put together 80 minutes of semi-coherent chat, starting as ever with a tightly poised quiz (+ results from last week’s United Passions defence) and discussing the latest from the world of film news, including Jurassic World‘s initially poor reception and Hugh Jackman relinquishing his most famous role.

As well as that, Brooker discusses Alex Garland’s Ex Machina;  Owen flips his opinion around on The Redwood Massacre;  Paul has two very different opinions on the terrifying We Are Still Here and bizarre sleep paralysis documentary The Nightmare;  and Steve tries to raise the tone with a review of Billy Elliot… but quickly plummets back down to our usual depths.

Join us again next week as we review (amongst other things) Colin Trevorrow’s adventure sci-fi, Jurassic World.