Accidental Love should have stayed unreleased. 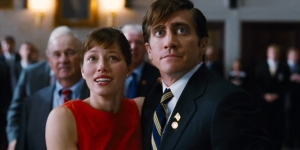 Accidental Love has a long history behind it that I feel is worth mentioning before I attempt to impart coherent thoughts on the film itself.  See, the film was originally titled Nailed and its production first began in April of 2008 before being shut down once James Caan left over creative differences.  His role was recast and filming started again, before being shut down again.  Then it started up again, then was shut down again.  This happened 4 times over the course of two months, either via delays or just straight up shutting down production, leading to the International Alliance of Theatrical Stage Employees to finally shut down production for good – supposedly on the final, crucial, plot-kicking-off-event day of shooting – in June 2008 as the crew weren’t getting paid.

The film then languished in purgatory for a full year and a half, before David O. Russell quit his directorial role, supposedly after clashing hard with the film’s producer, Ron Tutor, leading to 2010 re-shoots (no really) being done by somebody else.  An unfinished cut was screened in Los Angeles in March of 2011, supposedly without the knowledge of any of the cast or crew, in an attempt to find a distributor.  And now, four years after that screening and seven years after principal photography first begin, the film is finally seeing a release to the general public, albeit with an entirely different and hilariously generic title, and with O. Russell’s director and co-screenwriter credit changed to Stephen Greene because… well, I think you understand why he wanted his name removed from this regardless of how the film turned out.

So, it very much seems like the universe was out to get David O. Russell, that it was going out of its way to ensure that none of us had to bear witness to Accidental Love.  Unfortunately for us all, it didn’t go far enough.  Accidental Love got out and…  I honestly have no words.  I really don’t.  I got nothing here, folks.  I sat through all 100 minutes and I honestly could not tell you what happened, or what it was about, or what the point was, or why any part of this exists.  It’s one of those movies where quite literally every single thing is wrong, to such an extent that I have no idea what this film could have been even if it weren’t mired in production hell.  Could this has been a good movie at any stage?  I don’t know, I honestly do not know.

Here’s the gist of the set-up.  Jessica Biel plays a happy waitress at a throwback diner who is about to get married to pompous self-involved jackass James Marsden.  At the restaurant of the proposal, however, she suffers a freak accident and ends up with a three-inch nail in her head that can cause sudden mood-swings, unavoidable onsets of lust, and occasional lapses into Portuguese (for some reason).  Denied surgery because she doesn’t have healthcare, and with James bailing on her because he’s a self-involved jackass, she ends up inspired to travel to Washington D.C. when she sees an advert for a freshman congressman (Jake Gyllenhaal) in an attempt to coerce him into passing a bill providing free emergency health care for herself and her friends, a preacher with an inflamed penis (Kurt Fuller) and his charge’s prolapsed arse (Tracy Morgan).

Then, things get really weird.  There are a group of Girl Scouts who get involved for… some reason that I think is due to Shakira because that whole concept sounded funny to… someone.  Catherine Keener plays the Congresswoman who is opposed to this sort of thing because it might encourage child lesbianism, which she is also against, and she’s trying to push through a bill to build a military base on the moon because… reasons.  Jake Gyllenhaal and Jessica Biel fall in love because he could give her an orgasm whilst James Marsden couldn’t which is… something, alright.  There’s a moment late in the film where Gyllenhaal runs off to join a tribe in order to become a man and he either excessively bronzed up or just straight up blacked up (I honestly couldn’t tell, the lighting in this movie is abysmal) because… I honestly just do not know.

Look, I love me some absurdism.  Literally 18 hours prior to my typing these words, I just got done watching Wet Hot American Summer for the first time and I laughed harder at that than I had at anything else in months.  But the best absurdism, sort of contrary to the entire point of the concept but there you go, has a central point to it, a reason as to why, in a WHAS example, a man is dry-humping a fridge whilst a crowd of 10 year-old kids cheer him on.  But Accidental Love really doesn’t seem to have a point.  I think it purports to be a political satire?  Yet its satire is on the level of middle-schoolers who have watched a few episodes of The Daily Show but don’t at all get why that show is so good – Republicans oppose health care because they’re paranoid hate-filled lunatics, and it’s impossible to do good in politics because nobody’s got any principles.  Very insightful satire, folks.  Next you’ll blow my mind by telling me that Capitalism is a bad thing we should all rebel against.

Then there’s the fact that this is just shot and designed appallingly.  There’s this half-assed Tim Burton-y feel to the film’s pre-D.C. locations, where nothing feels quite real in this obvious stagey way, but is done with even less effort than Burton has in recent years (and which he did far better in last year’s sadly ignored Big Eyes, natch).  The camera spends much of its time tilted at 45-degree angles for no particular reason, everything seems to be underlit all the time (as I’ve already mentioned), and there is this dreadful Danny Elfman-esque score backing damn near everything.  The score is really irritating, I cannot stress that enough, so excessively quirky and blaring and zany and straining to communicate just how ka-RAAAYYYYZEEE the movie you are watching is and I hate it I hate it I hate I hate I hate I hate hate hate hate…

That score ends up indicative of the film in general.  It’s trying way, way too hard to be quirky and off-beat and Indie, yet doesn’t seem to have had any actual effort put into it anywhere.  It feels like a film that just had a whole bunch of the stupidest ideas thrown into it randomly and with no concerted effort to have the resulting concoction make any sense, have any actual point, or be any good.  It’s not funny, I’ll tell you that much, and everybody screaming their dialogue really fast at the top of their lungs does not disguise that fact.  I don’t know what this film is.  Are there supposed to be jokes?  Cos I didn’t find any.  Is this supposed to be a satire?  Are we supposed to laugh at Jessica Biel, since her condition keeps trying be played for laughs like the film believes that people who suffer mental damage from strange accidents is hilarious?  Are we supposed to like any of these frequently and outwardly horrible people?  I don’t know, I don’t know, I just do not know.

Just… I… It seriously just blows my mind that human beings made this.  Like, I’m used to good actors giving bad performances in bad movies – it’s like this was purposefully timed to remind us all that Jake Gyllenhaal can, in fact, give the polar opposite of the quality of his Nightcrawler performance when he really tries – and for (apparently, since I’m still yet to see a David O. Russell movie that I actually like) good directors to make terrible movies, but this…  Accidental Love goes beyond that.  This is so utterly inept, so totally incompetent, and so thoroughly and fundamentally wrongheaded and misguided that I see no universe in which this could have turned out to be any good.  Even if its production went off without a hitch, even if it weren’t so thoroughly outdated by now, I still cannot imagine this…  I…

I’m sorry, I just can’t believe that this was made by living functioning human beings.

Callum Petch, while you were sleeping, took over your town.  Listen to Screen 1 on Hullfire Radio (site link) and follow him on the Twitters (@CallumPetch)!

One thought on “Accidental Love”