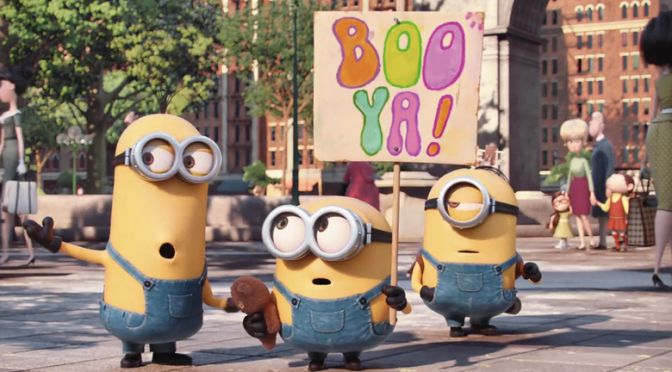 The best parts of the otherwise middling Despicable Me, which I’ve never quite gotten as a whole in the same way everybody else seems to have, were the Minions.  I mean, what’s not to love about the Minions?  Their design is simple yet distinctive and adorable, their collectively simplistic and mischievous personalities are endearing, Pierre Coffin’s voice work – that combines words of various languages and straight up babbling into nonsense sentences – of each Minion is stellar, and they’re home to the film’s best examples of ridiculous physical comedy.  They’re great comic inventions, so it makes sense that the second Despicable Me would double down on their screen time and that they would eventually, much like their Madagascar counterparts in the form of The Penguins, get their own solo spin-off movie.

It also stands to reason that their appeal would run out quickly when turned from minor comic show-stealers to vital part of the plot to main stars of their own movie.  However, much like The Penguins, that’s yet to happen.  Despicable Me 2 was far better than the first movie, although the increased Minions screen-time is not the sole or even main reason for that, and Minions manages to keep up that comic momentum for pretty much all of its 91 minutes.  Unlike the Penguins of Madagascar movie, Minions is not a film that wants to add legitimate emotional depth to its comic creations, barring one small little scene cribbed straight from The Land Before Time.  Instead, it just wants to turn them loose for 91 straight minutes of loud, ridiculous slapstick silliness.

And that’s OK, because it works!  Or, at least, it worked for me.  There are some lame gags, namely whenever the Minions break out into choreographed song-and-dance routines, but most come thick, fast, and with a resounding cleverness and intelligence to the way it performs its slapstick.  The rhythm and pacing of the film’s comedy is such that film almost never lingers on any punchline for an excessive amount of time, perhaps best epitomised by a short gag where the Minions escape from a polar bear by swimming away on a sheet of ice only to immediately try turning around when they spot a grizzly bear on the other side of the lake, with the film cutting to a different scene almost as soon as the second bear is revealed instead of holding it for diminishing laughs.

That kind of blistering pace is kept up throughout the film.  Don’t like this one joke?  Don’t worry, another 7 will be along in a few seconds, maybe one of those will take your fancy instead!  The story – which, for what it’s worth, involves Minions Kevin, Stuart, and Bob (all Pierre Coffin) trekking off to find a boss for their kind to serve, stumbling into the life of female supervillain Scarlet Overkill (Sandra Bullock) in the process – zips by as a result, being the launching pad for the gags instead of anything worthy of proper scrutiny, and any and all attempts at creating legitimate emotional depth will be undercut at every last opportunity by one gag or another.  Again, this would be a problem if the film wasn’t riotously funny, but I found it to be, I was in hysterics pretty much the entire time.

Strangely though, for me, the Minions almost end up being upstaged in their own movie by the supporting cast.  By its prequel nature, Minions gets the chance to explore the world of villainy more than both of the Despicable Me movies have been able to, which allows for a whole bunch of utterly ridiculous gag characters to make brief appearances – a time-travelling villain who keeps bringing his future self back for menial tasks, a prideful sumo wrestler, a unicycle-riding clown who juggles and spills bombs, one beautifully brilliant bait-and-switch that I don’t plan on spoiling here.  Their appearances are short but memorable and, although the film still doesn’t dig as deep into its world as I would like for it to do, they help shade in the world, make it feel like there is a world outside of our otherwise limited cast.

Animation-wise, Minions sticks to the Illumination standard, with simple yet endearing character designs in very good yet not amazing environments.  That said, Minions does show Illumination making strides in terms of technical strength, even if they still haven’t quite carved out an identity of their own yet.  Specifically, I really like the film’s commitment to shading.  Rather than working entirely from primary versions of the film’s various yellows and oranges, Illumination instead utilises different strengths of each colour to create this warm, comfortable glow that’s most noticeable when Kevin and Stuart are searching for Bob in a New York shopping mall.  It almost feels like a warm nostalgic filter that works very well for the 1968 setting, but also keeps the visual style from being a garish technicolour overload.

As much as I found myself laughing at Minions, though, I did also find myself missing that emotional undercurrent that could have pushed the film into being fantastic instead of just great.  Again, the film proceeds to undercut any attempt at legitimate emotional depth with a gag at any time; even the collective depression of the Minion tribe is played for ridiculous laughs instead of anything we’re supposed to take seriously, whilst the bond between Kevin and Stuart and Bob mostly just comes down to ‘these three share screen-time together’.  That is all fine because, again, the film is funny enough to make this a non-major issue, but I recalled how Penguins of Madagascar was able to foster a legitimate emotional depth and connection between its main protagonists and how pulling that off managed to push that film into being one of last year’s best animated features.  So I ended up a little disappointed in that not being the case here, especially since one of the reasons why Despicable Me 2 was such an improvement from the first one was because that emotional grounding was there.

Nevertheless, and despite it still not painting enough of a distinct or unique identity for Illumination to capitalise on in future films (more on that later this week), I really enjoyed Minions.  I’d been having a really miserable past few weeks prior to walking into the film, and so all I wanted it to do was make me laugh and cheer me up.  I just wanted something to laugh at for 91 minutes, I wanted what the film was selling me.  And I did.  A lot.  I laughed from the opening credits, that trace the origin and evolution of the Minion species, right up until the close, where it ties the whole story back into the standard Despicable Me series far quicker than I thought it would.  That is all I wanted, and that is exactly what I got, so I am more than satisfied with Minions.

Callum Petch made the scene, week to week, day to day, hour to hour.  Listen to Screen 1 on Hullfire Radio (site link) and follow him on the Twitters (@CallumPetch)!