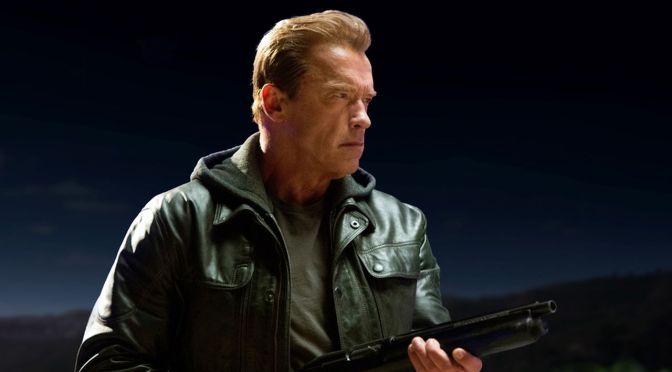 Whilst it’s great to see Arnie back in the leather jacket, and although it’s an improvement on the previous two films in the franchise, Terminator Genisys is far from reaching the impossible heights that James Cameron set.

— wait a second. Sorry. I appear to have started this article off by reviewing the 2014 remake of RoboCop. Let me try again. Ahem…

— Oh man! I appear to have done it again. I’ll try once more.

— Oops!! This is trickier than it looks.

OK. For real this time.

It’s very rare in Hollywood for a much beloved franchise to get a reboot some years later and turn it into a huge success. For every Jurassic World, or Rise of the Planet of the Apes, there are ten alternatives. After The Halcyon Company fought hard to acquire the rights for the Terminator series, they produced the bore-fest that was 2009’s Terminator Salvation. Alas, it was critically panned and the company folded not long after the film’s release due to various financial difficulties, despite making a profit on McG’s futuristic sci-fi actioner.

Thus with the rights to the series not reverting back to James Cameron until 2018, we now have Terminator Genisys (that’s without the colon in the title, unless you’re from America in which case you do get a colon), the fifth instalment of the franchise that began way back in 1984 with Cameron’s original movie. Although an argument could be made for placing this as the sequel to the original The Terminator, rather than the fifth in a series, and in the process wiping T2: Judgement Day, Terminator 3: Rise of the Machines and Terminator Salvation completely out of cannon. Not to mention the short lived TV series Terminator: The Sarah Connor Chronicles. They’re all ultimately pointless as director Alan Taylor (and writers Laeta Kalogridis and Patrick Lussier) retcon the entire job lot.

You see, the plot and the placement of Genisys within the sequence of movies is almost as convoluted as the history of who has owned the franchise itself at various points over the past 30 years. Its opening scenes are almost carbon copies of the original, albeit with less visible buttocks and silhouetted Arnold Schwarzedongs as this is a 12A certificate film, after all. It also cuts out the Kyle Reese narrated opening scene of a Terminator drone flying over a dystopian future wasteland, kicking off instead immediately with a T-800 (played by an Arnie body-double) arriving in 1984 with a flash of light shortly before approaching a group of punks on Washday Eve. Then things get a little less familiar. Waiting for our original Terminator is a visibly older version of the killing machine, dubbed “Pops”, and the two duke it out in a bout of fisticuffs.

As it transpires, this “good” Terminator, Pops, was mysteriously sent back in time even earlier to await the appearance of the 84 Terminator in a plot device that sends ripples through the timeline, distorting all manner of logical and illogical story lines. Jumping from the altered past to the future-future, we’re then treated to a show of Kyle Reese (Jai Courtney) and John Connor (Jason Clarke) taking out Skynet in the final battle. An enactment of an event that the original Kyle Reese (in Cameron’s movie) talked about occurring. Only now, it isn’t the final battle, as Skynet had one last trick up its sleeve. Back to the past, and Reese (now also naked and in need of a hobo’s trousers) is on the run from yet another Terminator in a 1984 that is unlike the one he expected. Waiting for him is a dreaded T-1000, played by the often under-appreciated Lee Byung-hun doing his best Robert Patrick impression. Apparently, the unassuming waitress Sarah Connor (Emilia Clarke) that Reese went back to save was now never a waitress at all, but is in fact a heavily armed survivor ready to take the impending apocalypse head on. She’s also apparently fully prepared for Kyle’s arrival and his involvement in her future, and invites Reese to come with her if he wants to live. And so begins the unravelling of an entire woolly-jumper-only-wardrobe’s full of threads after one tiny quizzical tug.

I realise that all sounds rather confusing, so to help you understand all this, here’s a quick summary. You ready? Stuff that we don’t really know about yet (wait for the sequel) has now happened in the alternate-past (1973) that has affected the current-past (1984) leading to alterations in the future-future (2029) that have changed Judgement Day in the prior-past (the mid 1990’s) to the new-present (2017). Clear as day, right?

And yet, despite this convoluted soft reboot, struggling to grasp when and what is taking place is not actually that difficult. In fact, whilst you’re watching what is yet another generic blockbuster blueprint executed to the required standard for a generic summer blockbuster box-ticking exercise, having to think about how each set piece fits alongside the other is a welcome relief. If you’re worried about whether you will be able to keep up, then have no fear. Exposition is your friend. “Mr Exposition” to be precise, played by JK Simmons, who helpfully pops up every so often to either personally explain what’s just happened, or to ask the other characters in the film if they wouldn’t mind quickly filling him (i.e. us) in on everything, just in case we missed it. You might mistake that for me complaining about Simmons. I’m not. I only wish he were in it more and had better dialogue to work with. The same could be said for Lee Byung-hun. Both actors were incredibly underused.

My major beef with this fifth instalment isn’t even to do with the acting, which a lot of other reviewers seem to have taken issue with. Jai Courtney – who I’m not ashamed to admit to have defended in public before – he in particular is used as a stick to beat the film with and I’m not entirely sure why. After speaking to Failed Critics writer Nick Lay about it, he told me that people dislike Courtney because “he just seems to be the type of lead that comes off a dull production line”. I get that. When you see him compared to actors like Sam Worthington, Taylor Kitsch etc, I totally see where folks are coming from. He’s good looking, well built, gradually getting bigger and better roles in bigger and better movies (or at least more expensive movies) without the average Joe being able to recognise his name if you sent them a CV with photo and portfolio of work. But still, I like him. He’s perhaps not made the best choice of film yet (let’s not talk about A Good Day To Die Hard or I, Frankenstein ever again), but he’s got charisma and can genuinely act, unlike a lot of his comparators. Like a lot of things about Terminator Genisys, Jai Courtney is fine.

Emilia Clarke as Sarah Connor is fine. Regardless of the fact she spends more time literally kicking arse than Linda Hamilton in the second Terminator film, she still seems less like an arse-kicking heroine and more like an adequate requirement for the story. But she’s fine. No better or worse than she’s been in Game of Thrones, for example. Jason Clarke (no relation), playing a slightly larger role than was perhaps expected in this time-hopping fiasco, is also fine. No better or worse than he’s been in Lawless, Zero Dark Thirty or last year’s Dawn of the Planet of the Apes, for example.

I don’t really care what anyone else says about “The Cyberdyne Systems Model 101 Series 800 Terminator”, “Pops”, “Uncle Bob” or whatever you want to call him, it’s always great to see Arnold Schwarzenegger back in the role. In the atrocious Terminator 3, he remained one of the best things in it, both in terms of his performance and having the best individual lines and scenes. Again here, he’s the outstanding performer. There’s call-backs aplenty to the more humorous wise-cracking T2 interpretation of the character, with the third film’s goofyness toned down considerably. Expanding on the idea that he potentially has the capacity to not just fake human emotions in order to better integrate himself into society and ultimately infiltrate human rebel bases, but actually organically acquire and increase his own emotional depth over time, effecting his decisions, ties quite nicely into the overall arc of the movie reflecting Skynet’s ultimate aim. It might come across as corny, but have you seen Judgement Day recently? Exactly. Original film aside, they’ve all had their fair share of cheese.

Technically speaking, Terminator Genisys hits the majority of the right notes. It’s by no means perfect, but it’s also not boring. It makes you laugh whilst simultaneously turning the action set pieces into progressively bigger and louder (and usually dumber) old fashioned fun. Sure it might sound a bit complex at first glance, but it’s actually a bog standard A-Z time-travel 12A family blockbuster. And that is its biggest problem. There are zero risks taken here. If there’s any part of the plot that veers from the already tried-and-trusted big-budget formula, I must’ve missed it. Having not just one, but a number of high-tech killing machines who stop at nothing until you are dead, it should be far more menacing a movie than it actually is. Instead, any moments of potential darkness are bizarrely steered well clear of, either through deus ex machina or – more often than not – characters just doing the complete opposite of the easiest / simplest solution in order to prolong events.

Need to kill Sarah Connor? Need to save Sarah Connor? Need to have certain events still happen to ensure the future works the way you want? Need to change the past radically to keep things how they are? It’s all a load of complete and utter nonsense that follows neither rhyme nor reason. Complete and utter gibberish with things happening simply for the sake of continuing the story longer than would realistically be necessary. But, I didn’t hate it. It’s dumb, but so are so many other movies of this ilk.

Come five years time, if somebody asks me whether [scene A] happened in Terminator Genisys, Star Trek Into Darkness, Jurassic World or Men In Black III, I won’t have the foggiest. It’s as indistinguishable from the next $155m movie as any other before it. However, if you scratch hard enough, you’ll be able to glimpse the relatively decent concept buried underneath the astonishingly stupid and generic exterior. I can think of worse ways to spend two hours. Hell, I can think of two worse films within the actual franchise that this film belongs to!