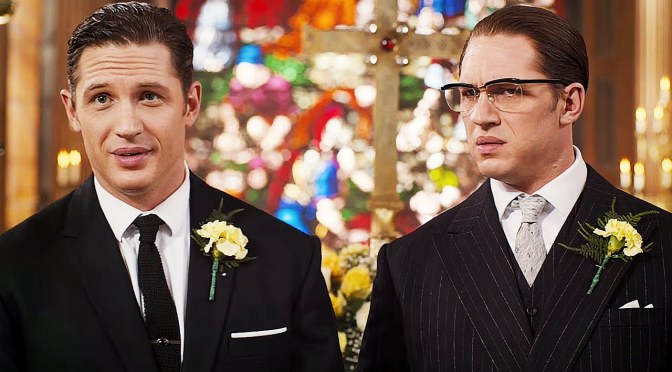 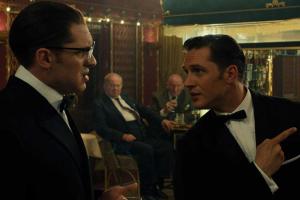 “Eastenders. They won’t talk to a copper. But they’ll kiss a gangster.”

“London in the 1960’s. Everyone had a story about the Krays”. Funny that, where I grew up in the 1980’s, everybody still had stories, but they were almost always complete bollocks. “My dad knew the Krays” or “my mum’s cousin knows them”. No, they don’t, shut up you twat. Dumb stories like that made me a little interested in the infamous twins and their lives though; and now, 25 years after the last good Kray brothers film, we get Legend.

Tom Hardy takes on the role of both Ronnie and Reggie Kray. Twin gangsters that were treated like rock stars back in the 1960’s when they were rising to power and still are by a country that dotes on them and idolises them as men that took what they wanted and didn’t let anything stand in their way. Jumping straight in as Ronnie is released from the psychiatric institution that is looking after him, having been certified insane towards the end of his first stint in prison. Skipping past the boys’ younger years, their time growing up and their boxing, we meet Ronnie and Reggie as they are reaching the height of their power. Casting watchful eyes across the crime in East London and looking to expand West where the clubs are more than ripe enough for a few very hostile takeovers.

With aspirations of being a big time club owner, Reggie is the classic East London gangster; a man whose words, clothes and hair are all equally slick and has a terrifyingly quiet way about him that sets him apart from the rest of the criminal element in his part of the woods. Softly spoken with a wry smile, he can sweep anyone off their feet with a look and a word. Enter Frances Shea, the young sister of Reggie’s driver, Frankie. The naive and impressionable teenager quickly falls for Reggie and his lifestyle, enjoying all the benefits that come with them and the pair are quickly married. Now Ronnie, on the other hand, isn’t slick, or suave, or softly spoken. The polar opposite of his brother, at least on the outside, Ronnie Kray was famous for his lightning quick temper and his inability to make smart, rational decisions once someone had angered him. Arguably the more dangerous of the twins, Ronnie was never too far from trouble during the brothers’ reign.

Legend takes a very small slice of the Krays’ story and puts it to screen for us to absorb. Making Reggie’s marriage to Frances the centre point of the film, we watch the gangster make very quick work of bowling the young lady over and making her his wife. All the while, with Ronnie never too far away, the suave criminal is seeing off competition from south of the Thames and expanding their empire. On the other side of the story, Scotland Yard detective Leonard “Nipper” Read is busy trying to make his career on the twins’ name. Read is relentless in his efforts to bring the Krays and their associates to justice; crossing paths with the infamous duo on more than one occasion and frustrated by their brazenness, the detective pushes back hard against the Krays.

I really don’t know where to begin with Legend; my whole experience was a bit up and down and while I had high hopes for it, the film rarely hit them. In real life, there are parts of the Krays’ story that lasted close to ten years that are given ten minutes screen time, the same amount as an event that lasted probably all of half an hour when it actually happened. No care has been taken to show the progression of time and instead audiences are left to wonder what the hell is going on. The lives of these gangsters was so hectic that just to know that six months, or six years, or whatever, had passed would have been handy.

The script doesn’t seem finished either. While there are some really great lines in it and Brian Helgeland’s brilliance shines through in a few places, it just seemed like a glossary of words Cockneys sometimes say was lobbed at a few pieces of paper and the guys thought that it would be enough. Helgeland’s direction, however, is superb and every scene just oozes class. The twins are regularly on screen together and try as you might, and I tried pretty hard, it’s almost impossible to see the seams with little or no sacrifice to the quality of the shot or the film overall.

Tom Hardy is amazing… for half of the film. His portrayal of Reggie Kray is nothing short of brilliant; suave, slick, with a hint of malice every time he casts his eye across a room. Reggie is cold, calculating and fearless when it comes to his business and his brother. And while his Reggie is great, Ronnie seems to get the short end of the stick. The problem is, while some of his scenes as Ronnie are spectacular, all too often it falls close to being a caricature performance, making it a complete exaggeration of the role to make sure you know who is who and it really isn’t necessary. Ronnie’s character is enough to separate him from his brother and the overplaying of the crazy psychopath role was just a little jarring. With his homosexuality and his temperament played more for laughs than is really right or required, it felt like they were taking the more nasty, brutal character and turning him into a bit of a punch line. The film still portrays him as cold and vicious, but something has been taken away from the man’s edge and it just didn’t sit right.

Hardy is surrounded by a great supporting cast. Christopher Eccleston brings a sterling performance as Nipper Read, the only man that had the guts and the physical size to stand up to the Krays; Chazz Palminteri, making a welcoming return to the big screen as the Firm’s American connection, and Paul Bettany filling to role of Charlie Richardson, the sadistic leader of the Richardson Gang. But standing right next to Hardy, is Emily Browning, playing dual roles herself not only as the slight and shy wife of Reggie Kray; she also acts as the film’s narrator, keeping the viewer informed when the rest of the film fails to and covering up the sub-par script with a nice voice over to soften the blow of the daft writing.

At the end of the day, Legend is a decent film, I very much enjoyed its attempt to be British Goodfellas. But a biopic can be good without it being a decent representation of real life and that is where we’ve landed here; essentially playing itself out like an East End rendition of A Bronx Tale and not really hitting the notes a film about our country’s only real “celebrity” criminals should be. There is no doubt that Tom Hardy is one of the greatest actors working today and he does a splendid job, but a poor script and haphazard story telling mar the performance. Legend is a superb flick, if a little goofy, but it feels like a gangster movie that they added the Krays to for marketing purposes. Considering the subjects of the film, this may be a poor choice of words, but the Krays deserved better than this.