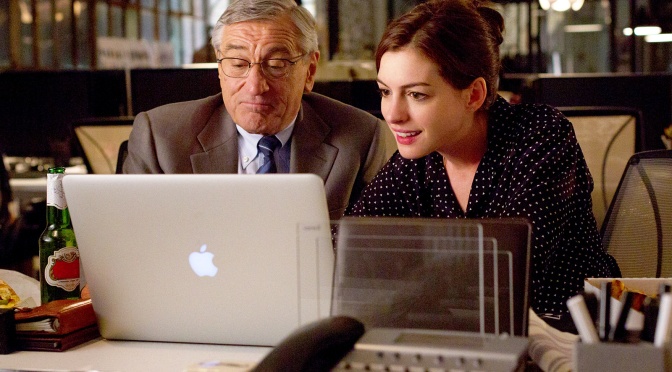 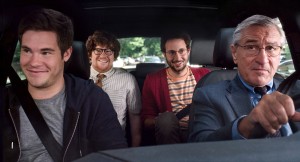 You know that feeling when you’re in the middle of a conversation with a group of people and, I don’t know, your mind wanders thinking about last night’s dinner or that episode of The Walking Dead you watched earlier and all of a sudden, you’ve got no idea what’s going on, the subject has changed, everyone is laughing and you’ve got absolutely no idea why? Yep, that’s pretty much how I felt coming out of the screening of The Intern tonight. A packed (and I mean PACKED – Not an empty seat in the house that was only half full for Sicario) cinema filled with people laughing themselves stupid at what may be the least funny thing I’ve seen this year. If THIS is the crowd that comedies are being made for from here on out, sweet baby Jesus, we’re all going to hell.

The Intern is a film. That’s it, it’s a film. It’s two hours of Robert DeNiro being Ben, a retired pensioner with far too much time on his hands and not enough to do. Apparently the laundry list of pastimes he lists in the opening scenes that include learning languages and doing yoga just don’t fill the hole that used to be filled with work. And so, after spotting an ad for “Senior Interns”, Ben applies for a job as a bottom rung lackey at an internet clothing company working for its owner, Anne Hathaway’s Jules, a workaholic nut case.

After several “you’re old” jokes, Ben stumbles into the news that Jules is being pushed into hiring someone to run her company and tries his best to help out by befriending her and lending his advice and years of experience. But what starts as lending a helping hand turns into a friendship that’s not only vital for Jules to figure her way through the next phase of her company’s life, but vital for Ben as well to help him feel like he’s part of something. Ben becomes such a big part of Jules’ day-to-day life that he becomes a part of the family and together, the unlikely pair will help each other through these completely different, but equally difficult stages of their lives.

I’ll be blunt. The Intern really pissed me off. I mean, I saw the trailer and knew it was going to be a bit rubbish, but holy shit! I sat for two hours without the film getting so much as a single laugh, not even a smirk from me. I watched for two hours as De Niro made a complete tit of himself, seeming to revel in the awfulness of a million old people jokes and sitting gleefully having the piss taken out of him for wearing a suit in a business filled with new-age, hipster douchebags who don’t seem to be able to tuck a fucking shirt in. Every single scene in this film angered me. From Anne Hathaway’s idiotic, workaholic imbecile who cycles around the office on a bike to save time and get some exercise in; to the other people in her office that don’t appear to have ever spoken to a pensioner before and acting really awkward around De Niro’s character seeming to think he’s just going to drop dead in the next few minutes. Oh, and the company has a bell they ring to announce pointless shit like the amount of likes their latest Instagram photo got! JUST FUCK OFF!

Among all the cringe worthy “jokes”, a working mum struggling with her work/life balance and a romance between Ben and the company masseuse, Fiona (a just as awful turn from the usually great Rene Russo), have been shoe-horned in for no reason other than the jokes about workaholic women and old men getting erections wouldn’t work without them being there. Not only do they feel jammed in to fill time, but no matter how hard I tried, I simply couldn’t give less of a shit about them!

De Niro’s acting credibility can never be questioned, but his decision to get involved with this embarrassment of a movie absolutely can. We’ve all seen the man’s comedy skills, I still go to the Analyze… films every now and again because of how genuinely funny and self aware they are. I also believe Hathaway has a great comedy presence, the silly slapstick nature of films like Get Smart have me in bits and she’s great in it. But here, she’s just an awkward hipster twat who’s steering the douche canoe of other hipster twats on screen and I absolutely felt bad for her.

Friends, please, heed my words. If you want to watch a De Niro comedy, do the right thing; go find Analyze This on your VOD vendor of choice. Do not do what I did and go watch The Intern. It’s an abortion of a film that should never have been greenlit, it’s about as funny as having your pubes plucked out one by one by an angry monkey with paws made of fire and to call it a comedy is to redefine the word to include chemical gas attacks on animal shelters and dry prison rapes! It’s a fucking embarrassment of a film and I guarantee, GUARANTEE, that if you watch it, like me, you’ll spend the entire run time trying to figure out how to get out of the cinema as quickly as possible, possibly by faking your own death.

One thought on “The Intern”