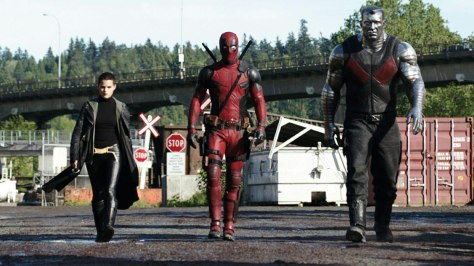 “Whose balls did I have to fondle to get my very own movie?”

Let’s get this out the way quick and easy; I don’t read comic books, I don’t care about comic books and I certainly couldn’t care less about how faithful comic book films are to their source material. I just want a good film out of whatever I’m paying to see this week. That being said, no matter how aggressively average X-Men Origins: Wolverine was, its depiction of Deadpool may have been one of the worst things I have ever seen put to film. Ryan Reynolds’ Wade Wilson was funny, but the Deadpool character he was mutated to, played by Scott Adkins – an entirely different actor – was just fucking awful.

Thankfully, after years of threatening to give fans exactly what they wanted with a real, true to the comics, Deadpool; Reynolds and first-time director/long-time video game effects producer Tim Miller have vowed to do us all proud and brought the “Merc with a mouth” to the big screen in not just the best comic book film that Fox has put out, ever; but maybe a challenger for my favourite comic book film ever.

Chasing after the man that left Wilson a scarred, deformed mess under his red spandex, Deadpool sees our hero cutting a path through anyone that gets between him and his new worst enemy; a man who has made a career creating mutants from desperate people. Having offered Wade Wilson escape from the multiple cancers that riddle his body, his cure comes at far too high a price for ‘Pool who loses far more than he gains from his “treatment”.

Story wise? That’s pretty much all you need. Deadpool isn’t a film that lives and dies on its story telling. It is a film whose sole existence is to make you laugh harder than you’ve laughed at any comedy in the last year or so. Making no bones about the fact that this film isn’t supposed to exist, Deadpool is a beautifully self aware film that shows far more genius than anyone expected. Within a couple of minutes of the opening titles, the fourth wall is broken as the red-suited nutter addresses his audience and drags us kicking and screaming into a world that so many of us thought we would never get to enjoy.

The real surprise with this flick, though, is the emotion at its centre. Most of Deadpool’s motivation comes via the girlfriend he proposed to just before his cancer diagnosis; Morena Baccarin’s Vanessa is the perfect emotional core for a film that I wasn’t expecting to have one. They bring us some weighty, heartfelt moments that serve not only to help us connect with the pre-mutated Wade Wilson; but they also amplify the already pretty out there, balls to the wall comedy to insane levels.

The laughs and the action are where Deadpool‘s greatest strengths lie. Razor sharp humour that takes aim at some of the most unexpected targets with a few politically incorrect and just flat out wrong digs at some that clearly wronged the writers in a past life. Genuine laugh-out-loud moments that had me wishing I could pause the film to wipe the tears from my eyes before the next joke came along. With action scenes as sharp as its humour; every fight, every explosion, every set piece looks absolutely gorgeous and feels bone-crunching. When your film’s fights include people with super-powers, the only way to go is completely ridiculous and that, is Deadpool‘s bread and butter.

With impressive and surprisingly good support from his bad guys, Deadpool has as much fun with its bad guys as its hero. With fun turns from Ed Skrein, a man who has finally embraced his budget price Statham image and enjoyed his time with it; and the always fun to watch Gina Carano in as his henchman (henchwoman? Henchperson?) doing all his heavy lifting. We’ve had a couple of X-Men imported into our film but even when the over the top Colossus and the delightfully stupid Teenage Warhead come on screen, nothing feels out of place or overpowered. Everyone compliments everyone else and at no point, even when we are eyeballs deep in insane superhero jousting tournaments, do any of these characters feel stupid or out of place.

Everything about this film screams that it’ll be filled with in-jokes and meta humour that will quickly become irrelevant and in a couple of years simply won’t we worth watching anymore. Thankfully, that’s nothing like what we get here. On its surface, Deadpool is a childish, silly flick for those looking to giggle their way through a couple of hours. But in reality, its sharp humour, superb cast and great action make this a film that not only blows away most of what Marvel have been putting out over recent years, but will still be fun to watch without losing any edge for years to come. In his fifth comic book movie appearance, Ryan Reynolds has finally given us an almost perfect film and an almost perfect performance. I can’t recommend it enough.