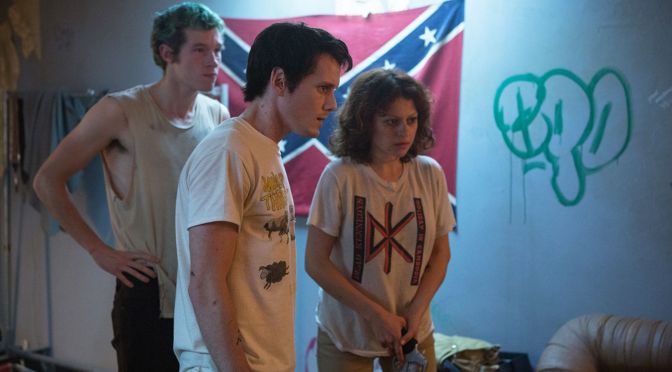 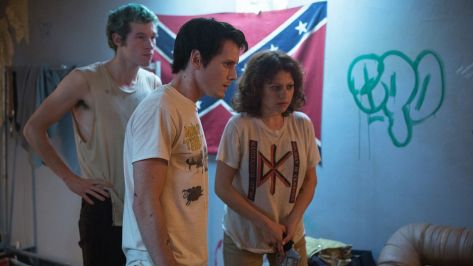 “Blades and fangs for the visitors.”

Ladies, gentlemen, I’ve just seen a nasty, nasty little film. A film that has been called a horror, but isn’t really. One of those tense, violent little movies that no one really knows how to classify but because it’s all blood, gore and suspense, we’ll call it a horror. A film that does interesting and gruesome things with Stanley knives and Nazis that’ll leave you flinching and grossed out.

Written and directed by Jeremy Saulnier (previously responsible for writing and directing 2013’s Blue Ruin), Green Room pits a rock band touring the Pacific Northwest against a group of bloodthirsty skinheads who own the club they have ended up in.

When band “The Ain’t Rights” find themselves in desperate need of a place to perform, they are set up with a well paying gig at a clubhouse in Oregon; a real “boots and braces” kind of place. Being a punk band, the group are used to a few seig heil-ers in their audience and don’t really pay it much attention until things go south, quickly and horribly. When the band – that includes Star Trek‘s Anton Yelchin reuniting with his Fright Night co-star Imogen Poots – stumbles upon a fresh murder, the skinheads in charge take steps to neutralise the people that are about to bring the police down on them.

Locking themselves in the venue’s green room – both “venue” and “green room” are said with a massive pinch of salt; a giant fucking shed covered in swastikas, rebel flags and SS emblems pretty much has a sign over the door that says “super duper Nazi human slaughter house” – the band has to fight their way through psychos with massive knives and some very angry dogs in an attempt to get their stupid selves out safely.

Green Room is a simple little film. There’s no convoluted or confusing story; five guys on one side of a door trying to get out, a ton of bloodthirsty Nazis on the other side trying to get in and somewhere in the middle, there is going to be a shit load of blood. Nasty, ingenious, wince inducing things happen with box cutters and machetes on both sides of that door as the band’s limits, and their bodies, are tested and tested again by the maniacal horde waiting outside for them.

Running the show on the saluting side of the door, is a terrifyingly cold and nasty Patrick Stewart. Light years from the Picards and Professor X’s we have gotten used to over the years, Mr Stewart has sunk his teeth deep into this role and is swinging for the fences. Think Stacey Keach’s Cameron Alexander from American History X but much, much worse. He’s a horrible man with not a nice bone in his body; he oozes evil in every frame and has turned himself into a genuinely terrifying force to be reckoned with. Each and every skinhead looks like he’s terrified of this guy too, it’s an amazingly impressive role for the Shakespearean actor. You almost want to cheer him on and see him win the day, not least of all because the band are a bunch of idiotic, unlikable twat flaps that you really kind of want to see horrible things happen to.

There’s not much else to say about this excellent little flick. Its story is tense and unnerving; its direction and cinematography are terrifyingly claustrophobic; and the acting is absolutely stunning. Its violence is nasty and unforgiving but even its worst parts don’t feel gratuitous. A great, great little film that left me shaken and shell-shocked as it ran its course. I can’t recommend it enough. I can’t wait for the general release so I can go watch it again.