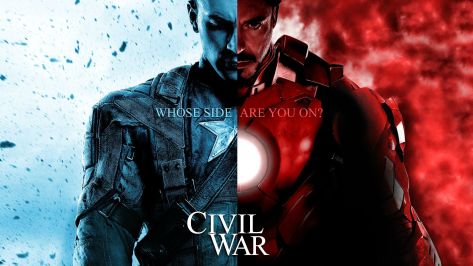 Battle lines have been drawn. Treaties are being drafted. The U.N. were informed.

It’s Steve ‘Captain Anyway’ Norman on one side, using his sense of justice and principles to determine what’s right. Opposite is Owen ‘Irony Man’ Hughes, putting his logic and rational thinking to the test. Listeners, choose your side as Civil War erupts on this week’s Failed Critics Podcast!

Andrew Brooker and Brian Plank are caught in the crossfire, therefore rather than being referred to as “guests” this week, you can legitimately call them Failed Critics collateral damage.

If you haven’t guessed what the main review on the latest episode is yet, then go speak to your doctor. But just for clarification, it is indeed the latest Marvel Cinematic Universe blockbuster, Captain America: Civil War – and boy do we talk, and talk, and talk about this one. We have our usual spoiler-free review later in the show, followed by a Spoiler Alert after the end credits, where the team go into more depth without worrying about ruining the plot, twists, characters… or anything else for that matter.

It’s not only Marvel on the pod this week, although the show does kick off with a chat about a potential Punisher solo-series on Netflix after a short hastily prepared quiz. Speaking of, Steve sinks his teeth into the latest Netflix movie Special Correspondents, starring Ricky Gervais. Owen and Brooker also review the latest James Cullen Bressack / Zack Ward indie-thriller Restoration (out today (3rd May!)), before Brooker also tackles video-game adaptation Ratchet & Clank and Brian has a look at cult classic Rollerball.

Join us again next week as we pray that our cinemas show something, anything, other than just Civil War for the next three months.