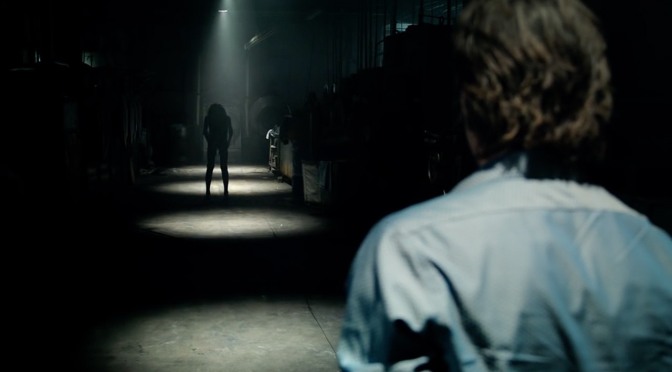 I only recently saw the trailer for the latest churned out, seemingly paint-by-numbers horror movie Lights Out. A quick chuckle at it, as is the norm when you see another one of these New Line Cinema pant wetters, and you move on. But things living in the dark is one of the few things guaranteed to scare the shite out of me (see last year’s We Are Still Here) so this had a little potential, and interested me more than most. It helps that, even in the most minuscule of ways, recently everywhere horror director James Wan’s name appeared in the trailer.

After his father is killed under mysterious circumstances, school boy Martin (Annabelle‘s Gabriel Bateman) is haunted by a strange figure that lives in the shadows. Brought to life, and living with his mother Sophie (Maria Bello) the supernatural entity seems hell bent on killing everyone that even thinks to question Sophie’s sanity.

When Martin’s ghost problem spills into school, his sister Rebecca (Teresa Palmer, of Warm Bodies fame) gets involved and drags Martin back to her place. It quickly transpires that no where is safe if there’s a shadow in the corner or a closet without a light in it. Brother and sister, who have been plagued by the ghost of Mum’s friend Diana before, must now figure out how to beat this ghost that only comes out when the lights go out, before she kills everyone and takes Sophie for herself.

As these films become more and more popular – love them or hate them, they’re good date night movies – it seems like originality kind of goes out of the window. This has always been my issue with horror films made by stockholders. So if you can’t be original, be good. No, be great.

Ok, so Lights Out isn’t GREAT. But it is very good for what it is.

Something grabbing you out of the shadows is pretty damn scary. But scarier than that is the idea that it’s coming after you because it thinks you’re trying take away its only friend: your mum. This nasty little fucker is literally hiding under your bed waiting for the lights to go out so it can tear into you like your in-laws mauling the chicken at the one and only barbecue you were able to squeeze in this year. This is why this film done a decent job of scaring the crap out of me. The only time you see Diana, she’s a moving shadow with claws, moving and shaking towards her victims as they clamber desperately for the light switch. If you’re lucky enough to get through the dark and get the lights on, she’s gone.

Someone, somewhere has done a great job of putting this film together. Director David F. Sandberg – who based the film on a short he made a few years back – has had found a few imaginative and fun ways to scare the balls off of you. Particularly when it comes to telegraphing Diana’s presence. As you hear her scratching away in the dark, you wonder which little corner she is going to jump out of. As the lights go down or the candles flicker, you are on the edge of your seat biting your nails in anticipation of her arrival. There’s a beautifully creepy and jumpy moment involving a pulsing red light that will have you jumping out of your skin and a genuinely creepy, skin crawling moment as this mass of black appears exactly where you think she will, but with an air of menace that’d have you screaming like a little girl if you weren’t in a crowded cinema.

In what is, I think, a pretty effective metaphor for living with a mental illness and living with a parent with a mental condition, Diana’s presence and the effect she has on families isn’t subtle, but it does exactly what it sets out to do. And in an ever more clogged-up genre filled with boring, badly made crap, Lights Out with its short and snappy 80 minute runtime is a breath of fresh air.

Scares are obvious and predictable, but they’re made well enough to give you the creeps as and when it’s required. I’m certain I’ll be shifting my arse up the stairs a little quicker when I turn the lights off tonight.