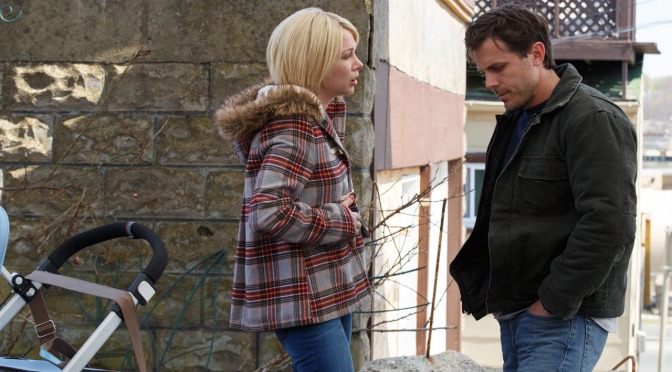 “We’re going back to Boston.”

Didn’t think I’d be saying how refreshing it was to be watching a typical Oscar-bait film this early on in the year. Between religious period dramas and musicals, I went into Manchester by the Sea hopeful of a good film; wanting a great performance from its star; and hoping for something a bit more… I don’t know… run of the mill for Oscar season.

I know how bad that sounds. But I mean it one hundred percent as a compliment. I was really looking forward to this.

Shortly after the sudden death of his brother, quiet and reserved handyman Lee Chandler (Casey Affleck) finds himself pulled back to his hometown of Manchester to take care of his teenage nephew Patrick (Lucas Hedges). Named the moody high schooler’s legal guardian by his brother Joe (Kyle Chandler) without his knowledge, the troubled janitor has to face a home he’s been avoiding for years, family and friends – including his ex-wife Randi (Michelle Williams) –  he’s not willing to deal with and a kid who’s just lost his old man.

Between the pair of them, they have enough baggage to last a lifetime or two and now they’re stuck with each other. Somehow, they need to work out their differences and their demons to find a way to live together.

So yeah, run of the mill is the order of the day here.

Manchester by the Sea doesn’t do anything that Oscar chasing movies haven’t done before. Dead family, orphaned kids, quiet dude with a really dark past and they all somehow meet in the middle and have to settle their differences. It’s an old, clichéd story that hasn’t had anything new to say in years. So the way to make your film shine, the way to make it stick out, is with its performances. Your stars have to make me give a shit and that’s where Casey Affleck, a guy I’ve been a fan of since I saw him in Gone Baby Gone, shines.

Lee Chandler is a loner. He chooses to live a solitary life in a basement apartment and can barely change a bulb or go for a pint without his being a downer affecting everyone around him. The man is haunted by his past and it takes around an hour for the film’s flashbacks to tell you why. Until then, the only indication you’ve got is Affleck’s face; and boy does he put on a show.

The man wears all his emotion on his face and every second he’s on screen you feel sorry for the guy, you feel awful for him, you know the guy has been through some shit and there are no words to describe just how deep the pit in your stomach is by the time you’ve gotten to the end of the film. And it’s all Affleck’s doing. His performance is the stand out one of the season and his recent Golden Globe is more than deserved. A top rate performance and I’d like to go ahead and congratulate him on his Best Actor Oscar now, if I can.

But of course, Affleck isn’t alone here and without the support of some great talent in the form of Michelle Williams and Lucas Hedges, he’d be nowhere. Hedges’ role as the mopey teen trying not to look like a mopey teen was sublime. Perfectly encapsulating the way so many teenagers would behave in that situation, trying to not look upset, trying to be the big guy in front of his mates and letting his frustrations out in the wrong direction, every time. I mean, he’s no Jacob Tremblay, but he’s done a pretty damn fine job.

Equally as impressive is Michelle Williams as Lee’s traumatised ex-wife. I can’t imagine how tough a role it must have been, dancing elegantly between flashbacks to the days that brought her and her husband to where they are today; all the way to showing us her new life with her new family. Her moments on screen are far fewer than Affleck’s, but that doesn’t make them any less powerful or emotional. With the always great Kyle Chandler bringing up the rear as the brother not long of this world; you certainly can’t accuse this film of skimping on the cast.

Writer and director Kenneth Lonergan has put together a fine tale here, with more than enough emotional pull to satisfy even the most masochistic of weepy drama lovers. Every tear jerking trope is here for you to enjoy as Lonergan tells Chandler’s story both after his brother’s death and before with some pretty heavy handed flashback use. Interestingly, the one thing I didn’t expect was for this film to have as strong a comic edge as it had. I almost felt bad for laughing as much as I did but the man’s crisp, funny script provided the perfect amount of levity in all the right places to stop me from being a quivering mess by the time I left.

If I had to find a complaint, I would have to say it’s with the flashbacks. While poignant and necessary for the story, they felt a little overplayed and, almost criminally, didn’t define themselves from the present day parts of the film in any way except to have his brother alive in them. I’m annoyed to say that I got lost on more than one occasion, if only for a second or two, because I didn’t realise we’d skipped back a few years. But that’s a minor complaint in an overall excellent film.

Manchester by the Sea checks all the Oscar committee boxes and then some. It’s not original and it’s not going to break any records, but it is a thoroughly enjoyable film that deserves every accolade it gets and more.