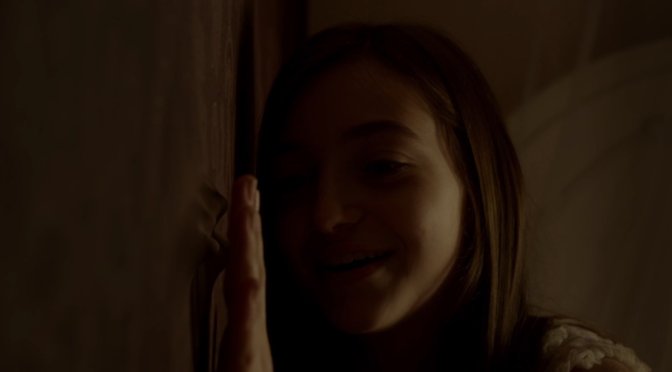 “Beauty is just so brief.”

Haunted house horror can often be a procedural affair. I’ve sat through far too many that follow the exact same blueprint as the last two-dozen and don’t do anything to mix things up. You’re left with nothing but a tick-sheet of predictable horror to endure.

I’ll be honest, as much as I am a fan of indie horror director James Cullen Bressack, and as much as I’ve loved most of his films, I went into Bethany with some concerns that I was in for another paint-by-numbers horror with nothing to make it stand out from the crowd. Not because I don’t think Bressack has it in him to do something different; but because as a true student of the genre, he would be forgiven (kinda) for following the subgenre’s guiding principles for his first haunted house flick.

Moving back into her childhood home after her mother has died, Claire (Stephanie Estes) and her husband Aaron (Zack Ward) are hoping to leave a chaotic and traumatic past behind them. What should be a separation from the world that’s done them more harm than good quickly becomes an abject lesson in how to forcefully revisit a childhood that scarred you for life.

Now, Claire is living in the house she once shared as a child with her beauty obsessed mother (Shannon Doherty) and her younger years are, quite literally, coming back to haunt her.

Claire grew up with her best and only friend Bethany; a figment of her imagination, a ghost in the walls that kept her company when her abusive mother went off the rails. Now she’s back home, Bethany appears to be looking for company again. Aaron and his tormented wife are going to need to work out what she wants and how to appease her before the now bitter and vengeful spirit gets the better of them.

Ok, so it’s not totally original and it does sound like a lot of indie horror you’ve already seen. But that’s not to say that it is the same as all the dried up old shit that populates the bottom row of the Netflix horror section. On the contrary, to call this simply a horror movie would be to do it a real disservice. Bethany dances a line between traditional horror and psychological thriller; and it’s a line that that so many have failed to conquer before. It’s a tough genre to crack because you need to be able to build an atmosphere that convinces your audience that this is something that could affect them. It has to not just be believable, but it has to be something that plays on the deepest fears of anyone witness to it. Ghosts in the walls should do the trick, huh?

Bressack has done himself a world of good by getting a good writing partner. Teaming up again with Zack Ward for the screenplay has brought a tightly scripted story with very little in the way of throw-away dialogue or fat that can be cut away.

Last year, the pair wrote Ward’s feature directorial debut together, Restoration; a decent flick that proved the duo could script a film together and it not be complete rubbish. With Bethany this writing team have definitely found their flow and they have worked hard to make sure that every time you think you know what’s coming, you’re usually wrong.

And that’s where Bethany really shines.

You would be forgiven for thinking you were walking into a predictable, run-of-the-mill horror, because that’s just what we’ve come to expect from so much of the genre nowadays. From the smallest indie to the biggest Blumhouse production, we’re just conditioned to expect aggressive blandness when it comes to modern horror. Thank god for people like Bressack and Ward trying to inject something a little different into these films.

It’s not necessarily success you need when you try something different; you simply need to have attempted to shake things up. As quickly as every trope is rolled out (let’s say, oh, I don’t know, steamy mirrors on bathroom cabinets that you can open) and you’re positive something is gonna jump out behind you, Bressack calls your bluff and does something completely left-field and creeps the shit out of you instead. It’s a genuine breath of fresh air to not be able to guess what’s coming.

As you get towards the end of this tight 90 minutes, as the last card is flipped over and the reveal you’ve been biting your nails to get to arrives, it is an honest-to-goodness “holy shit” moment that’s as strong a horror reveal as it is an emotional gut punch. It’s at that point that you realise just how much of a personally resonating story this must have been for the man behind the camera.

It just feels like a lot of love and effort went into the creation of Bethany; it feels like James Cullen Bressack is trying to carve out a little piece of horror to make his own and it feels like this director (that I’ve been championing for so long) may have made the film that gets him known in far wider circles.

I can only hope.