Remember back in August last year when Ubisoft announced the Nosulus Rift? It’s a VR device to be worn over the nose while playing South Park: The Fractured But Whole, which induces a noxious smell whenever your character farts. Everybody thought it was fake, at first – but it’s actually real.

How disappointed writer/director team Dan Kwan and Daniel Scheinert must be that this technology did not come out in time for them to make use of it with their farting-corpse comedy, Swiss Army Man.

Stranded on a desert island and ready to kill himself, Hank (Paul Dano) spots a man lying on the shore. However, Hank’s supposed saviour (Daniel Radcliffe) is already dead. Losing all hope, Hank attempts once more to commit suicide, only to be rudely interrupted by a chorus of gasses escaping from the bloated body lying in the sand. In a light-bulb moment, Hank decides to ride Daniel Radcliffe’s cheese cutting cadaver to freedom, like a jet ski propelled by flatulence.

This, it transpires, is just one of many functions of the lifeless body that are available to Hank, as he lugs his unusual companion through the mud and trees of the island forest. Manny, as he comes to be known, can chop wood, dispense water, use his erection as a compass and, of course, employ his toots in a multitude of different and equally helpful ways.

You’ll be unsurprised to hear that during its Sundance Film Festival screening, many audience members walked out due to the juvenile humour of this bizarre comedy. Quite what they were expecting in the first place, I’m not so sure. Whilst this isn’t Terence & Philip, it’s still at its core one long fart-gag. Indeed, as the Daniel’s explain in the informative hour-long Q&A on the DVD, the concept of a man riding a farting corpse across the ocean was the main idea that first made them want to make the feature; and when Dano hoists Radcliffe’s pants down to expose his bare arse, it provides the first big WTF moment. Very early on, you are left in no doubt as to exactly what you are letting yourself in for.

As well as literally being stuck in the wilderness, Hank’s isolation is also a metaphor for how he sees his place in the world. Loveless and frustrated, clues are casually dropped into the narrative to make you question how much of this is real, and how much is merely an artistic representation of the loneliness that envelopes people in Hank’s situation. Yet the conclusion feels earned. Although the emotional pay-off isn’t quite Spielberg levels of pathos, their plan to make you laugh with the first fart and make you cry with the last fart is somewhat successfully achieved.

However, the meagre attempt to imbue the narrative with a sense of depth is disappointingly superficial. With Hank describing normal, ordinary and every day activities to his dead friend, such as why people wank, the pseudo-philosophical quandaries come across more like Jerry Seinfeld Lite. There’s nothing wrong with observational humour, but when passed off as an exploration of the human condition, it just seems half hearted; and often undermines itself by going for an easy laugh. Moments of feeling anything for our on screen duo are fleeting and, quite frankly, the shallow character building often gets in the way of the more entertaining aspects. 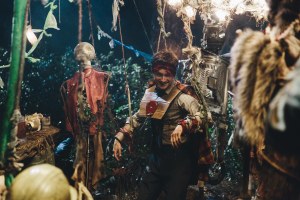 Swiss Army Man is undoubtedly at its finest when its creative winds are blowing. Weirdly, for a film with enough fart sounds to make Spike Milligan blush, the gag never outstays its welcome. From the set designs, to the set pieces, the picture is draped in imagination. A makeshift bus built from twigs and dirt is perhaps the standout set, only rivalled by the party scene with its pulleys and levers. The aesthetic ticks are what make this comedy more than just Castaway with a trumping Wilson.

However, the design and look can only carry a film so far. The ever reliant Paul Dano’s natural charisma is largely to thank for rendering the feature watchable from start to finish. The dialogue he and Daniel Radcliffe share is sometimes clunky, sometimes snappy, but its delivery can never be faulted. In Mary Elizabeth Winstead’s brief appearance, she also manages to shine and brings a bit of brevity back to an otherwise fantastical tale. Her scenes jolt the audience back into reality and allow you the space to look back on everything that’s happened beforehand with a new perspective.

The A Capella soundtrack, written and recorded by Andy Hull of Manchester Orchestra and Robert McDowell, also suits the tone of the film extraordinarily well. You will be ba-ba-ba-ing for the rest of the day.