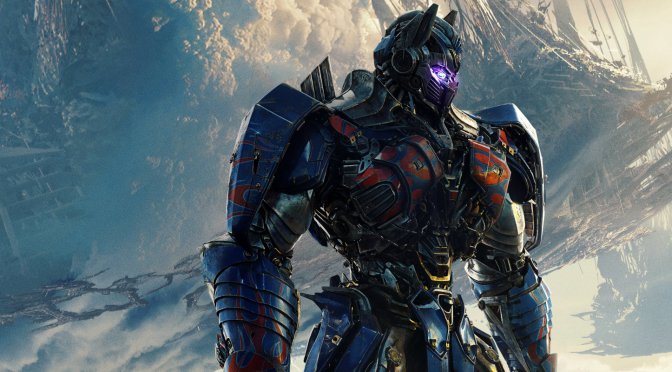 “It started as a legend. One of the greatest of all.”

Whilst The Last Knight might be the last of Michael Bay’s Transformers movies (if you discount the proposed Bumblebee solo spin-off), it still seemed like it was worth sending Andrew Brooker to review this unequivocally dire fifth instalment.

Who’s stupid bloody idea was this?

Why, in the name of all that is holy, do people keep throwing money at Micheal Bay to further cannibalise this beloved kids series and tread all over my childhood year upon year? And for fuck’s sake why do I keep watching them?

More or less following on directly from 2014’s adventure, The Last Knight sees Earth without Optimus Prime, having left for his home planet during his final scene monologue in Age of Extinction . Without a leader, either on the Autobot or Decepticon sides, anarchy reigns.

Mark Wahlberg’s Cade Yeager is the failing inventor who unwittingly found his arse front and centre in the last film, is now hiding out in a scrap yard rescuing and protecting any Transformers he can find. He’s protecting them from the multi-government formed TRF, headed up in the US by colonel William Lennox (a returning Josh Duhamel); a military reaction force created to find and destroy Transformers.

Deep breath… I’m not done yet.

Now, Optimus finds himself on a ruined Cybertron, being corrupted by a robot god living on the planet. He’s been tasked with finding an ancient staff that has been hidden on Earth since King Arthur’s time of knights and round tables and a drunken Merlin. (No, I’m not joking.) Prime needs to find the staff so that Cybertron, his destroyed home world that is now on a collision course with Earth, can use the power of an ancient, massive Transformer buried within the planet since the time of the dinosaurs (still not joking).

This enormous, eons old Transformer, Unicron – Yes, THAT Unicron – has awoken in reaction to Cade Yeager being handed a talisman from the dark ages by a dying Transformer in a crashed ship left over from Dark of the Moon. Oh yeah, and the government has made a deal with fugitive Transformer Megatron to allow him to hunt out the Talisman and the spear in the hopes of saving the planet.

You can stop reading at the end of this paragraph if you like, you don’t need to know much more than this. Transformers: The Last Knight is nothing more than the rotting corpse of a once prized, but long dead horse, constantly flogged by a committee of studio executives to squeeze just a little more from its lifeless body. It should be cremated and its ashes thrown into the faces of every single pointless human being involved in the creation of these films.

In no measurable way would I call this a good film – or even a fun film – and I’m someone that tried desperately to enjoy this series, and tried desperately to find some positives in each of them. But no, it can’t be done. From crowbarring the Transformers into the legend of King Arthur, to the complete bastardisation of a favourite character from the animated movie; The Last Knight is easily one of the bottom three worst films of this year and I can’t see it being shifted from that list once the Failed Critics Awards roll around in December.

If this was any other film, I’d feel obliged to detail and backup that previous paragraph. But here, I honestly don’t think it’s necessary. But I’ll do it anyways, I suppose. Got to be professional.

I’ll start with what I think is maybe the most egregious crime: Unicron. For fans of Transformers, Unicron is the terrifying planet sized bad guy that destroys other planets. For super-fans, he’s the brother of the Transformer that eventually became Cybertron. For Bay (and his rotting arsehole of a writer’s room) he’s just another name that they can use, lying to themselves and us that they are doing it for fans while not really giving one single solitary shit whether or not they actually do the character justice – see also, previously arse-fucked fan favourites like Soundwave, Grimlock and this new film’s Hotrod. From a fan perspective – and I realise that I’m not even the biggest fan of this property – the misuse of Unicron may be the worst thing this series of movies has done to its inspiration. Moving on…

Most of the rest of my complaints are ones that can be levelled at the rest of the series too, but this time around it feels like the issues have been turned up to eleven because most of the fun bits that have made some of the previous entries somewhat palatable have been stripped away. Bay’s direction seems to have gone off the rails here. His history with this franchise his sketchy at best, although I admit that I am quite the fan of the first film. As the years have gone on, he’s tried and failed so many times to make a great film and the moron is falling over every single time. From stripping all colour away from his robots in the third film, making it impossible to distinguish what the fuck is going on in on screen fights, through to a half-reboot with the last flick, but not actually having the balls to follow through and reboot anything. With this fifth entry, Bay appears to have given up completely and instead has just decided to throw cash at things to see if it makes something better, then not caring when it doesn’t. All those Bayisms are there; the sweeping shots, lots of looking up at things, slow motion American flags and explosions galore, but even he seems to be phoning it in. There’s no fun to be had here anymore. There’s no exhilaration from watching gorgeous cars racing and then turning into awesome robots beating the shit out of each other. There’s no joy in his big screen chaos any more, and there is definitely no more story worth telling in this tired franchise. I mean, King Arthur, really?

By the time I got to the end of this most expensive sleeping aid, with its world ending storylines all mashing themselves into one, it felt like it had more in common with Independence Day and Bay’s own Armageddon than it did having any business being called Transformers.

Oh shit! I forgot to mention Anthony Hopkins in my synopsis. Anthony Hopkins is in this one, guys. Playing an English Lord in charge of protecting the spear that Prime is looking for, even though he has no idea where it is. He even has his own robot butler that may or may not also be a ninja! Shoehorning in an elaborate story that has him part of a secret society named after the family that Shia LeBeouf hailed from in the first two films, that are descendants from Arthur and Merlin… or something like that. I mean, it’s so convoluted. And I gave up trying to figure the logic of having an attempt at continuity in this series when they forgot to add (another fan favourite) Galvatron back into this film after he escaped scot-free at the end of 4!

I just… I can feel my head hurting trying to get all of this into some semblance of order and logic, but it’s impossible.

Two and a half hours (mercifully, shorter than the previous film by fifteen minutes) of humour that doesn’t land once. From Hopkins trying to be funny as he flips people off from out of a car window, to Merlin in the early sections of this film trying desperately to be Monty Python, I shit you not. Not. One. Laugh. From start to finish, just cringeworthy awfulness.

Not that this is something that should be praised, but at least the disgusting amount of sexism had been toned down a little bit. Mainly because the “main” female character in it is a 14 year old girl, so I’m not going to praise Bay too much for NOT sexualising a minor. The macho bullshit is still here, and will forever be there, and I’m not going to bitch at the filmmakers too much for that, mainly because that is a trope of action films through and through. It’s not exclusive to Transformers or Bay films in general.

I struggled with starting this review yesterday. As I sat down to write, I found myself with no inclination to talk about this bloody terrible film. The thing was, it didn’t anger me, it didn’t offend me, it didn’t incite the kinds of feelings that would prompt me to spout 2,000 hateful words in the direction of this film. It was just utter shit. It was boring, it was dull, it was a film about giant robots knocking the fuck out of each other that somehow bored the piss out of me; and I’d rather smoke a pipe jam packed with homeless people’s pubes than watch a sixth film in this series. But overall, I think one of my virtual twitter buddies hit the nail right on the head.

What more do I need to say?
The new Barricade was pretty fucking cool.

2 thoughts on “Transformers: The Last Knight”