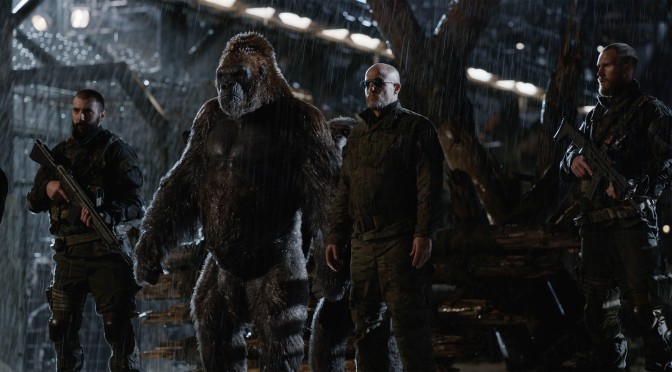 NOOOOOOOOOOO– I mean, yes, it’s the latest episode of the Failed Critics podcast with Callum ‘bright eyes’ Petch and Dr Andrew Brookerzaius joining hosts Steve ‘chimpan A’ Norman and Owen ‘chimpan Z’ Hughes as they get their stinkin’ paws on The Dawn of the War Beneath the Battle for the Planet of the Living Dead Apes, or whatever it’s called.

Elsewhere on a particularly shambolic episode, we mull over the casting of a woman (aka Jodie Whittaker) as The Doctor for the upcoming series of BBC sci-fi fantasy series Doctor Who, as well as the passing of legendary filmmaker, George A Romero. There’s also a quiz to open the show, with Steve and Owen neck-and-neck at 2-2 in the table. Winner of the quiz takes it all this week and forces the other to watch a film of their choosing. I wonder what it could possibly be…?

In What We’ve Been Watching: Owen continues the zombie theme by watching gory Korean thriller Train to Busan; Callum catches up on some Ben Wheatley with folk/hitman horror Kill List; and Brooker finally gets hold of a copy of The Autopsy of Jane Doe.

Join us again next week for a review of Christopher Nolan’s war drama, Dunkirk.