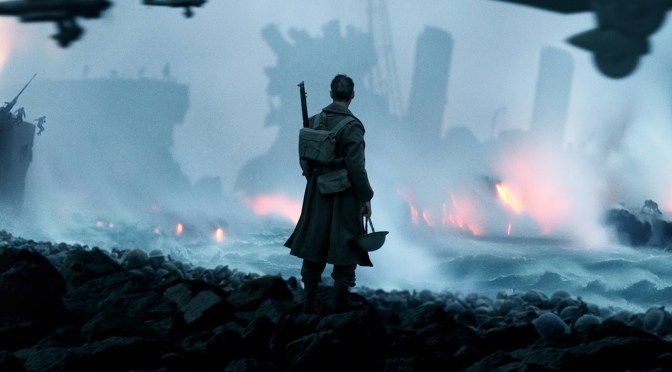 Christopher Nolan’s WWII drama, Dunkirk, has finally landed on these shores. We drafted our podcast host, Steve Norman, to write a few words on this “triumph in storytelling”.

World War 2 was always one of the things I liked learning about most in school. In history I much preferred learning about the conflict with Nazi Germany than the Romans, or ancient Egypt, or the incredibly boring industrial revolution. Perhaps this is why I’m a big fan of World War 2 movies. I love them all, from The Great Escape and Escape to Victory, to Inglorious Basterds, The Longest Day and the amazing TV show Band of Brothers.

I was very excited to hear of a movie focussed on Dunkirk, a part of the war I don’t recall receiving the big screen treatment; and I was definitely not disappointed.

It feels real, putting you right in the middle of the events from the start. It may not be as visceral or even as gory as other war movies – there are no great blood splatters or missing limbs as seen in the opening shots of Spielberg’s Saving Private Ryan –  but there is a sense of dread and peril. You feel the danger the lads on the beaches are in even though we never see the face of the enemy. You also get a sense of the vastness of everything.

Most well-known for his Batman trilogy or the mind bending Memento, illusion-thriller The Prestige, the epic Inception and 2014’s spectacular sci-fi Interstellar, Dunkirk is a departure from the films we have come to know Christopher Nolan for, with a story more grounded in (and based on) real events. This does not stop it from becoming his best film to date.

It really is a triumph in storytelling with its non-linear layout bringing together the many threads of the film.

Dunkirk is a Hollywood blockbuster in name only. There are no rousing speeches, no logic defying acts of heroism, no Americans charging in to save the bumbling Brits or token Yank plonked among the British forces, tropes of many a big budget World War Two film.

There are a few surprises. There is a huge lack of dialogue, although this is far from a criticism. Despite most of the main characters having very few lines, they put over the feeling of peril and hopelessness those involved must have actually felt. There isn’t a central performance that can be criticised, even Harry Styles.

Yes, we have to mention Harry Styles. The former One Direction member plays Private Alex, one of those escaping the advancing Nazi army. Apparently Nolan had no idea who he was before casting him. I remain dubious.

However he was…fine. He wasn’t great, he wasn’t bad, he was fine. Styles probably deserves some credit though. This is his first big acting gig, as far as I’m aware, and it would have been easy for him to pick some tween Rom-Com but he went for a gritty and realistic war film. The supporting cast also boasted the likes of Nolan regulars Tom Hardy and Cillian Murphy, as well as Kenneth Branagh, Fionn Whitehead and James D’Arcy.

For me though the best came from Mark Rylance who played the captain of one of the civilian boats that were requisitioned by the Royal Navy to go and aid the evacuation (if my GCSE History is correct, the Navy commandeered these vessels in most cases, with the will of the owners of the boats behind them but some of the ship captains sailed their own across the channel. Dunkirk really is an interesting piece of British history, go and read up on it).

Again, through minimal dialogue, he conveys so much: the Dunkirk spirit, the sense of duty, the understanding of the horrors of war; it’s all there.

Running the risk of sounding hyperbolic, Dunkirk could really stand the test of time as one of the best World War 2 movies ever made.