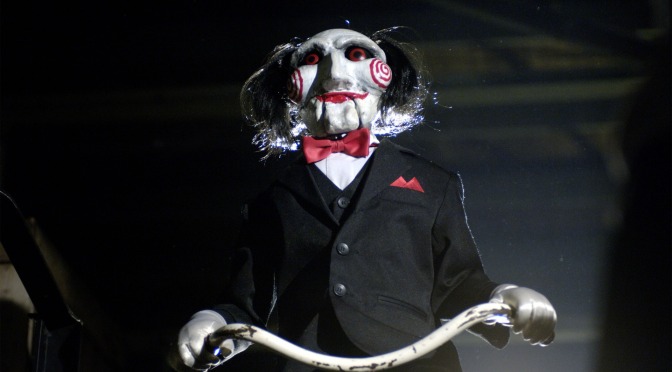 It’s October! The leaves on the trees are turning brown, it’s getting darker earlier in the evening and folks are rummaging through their DVD collections, looking for their favourite horror films to watch in time for Halloween. As such, every week this month has seen us expand on our Decade In Film series with a spin off article focussing on five horror films from the sixties, the seventies, the eighties, the nineties and the noughties! The format is much the same as our regular series, but with a slight twist.

We’ve made it! Today is officially the spookiest day of the year, Halloween! It also sees us publish our final entry to the Decade In Horror series. Andrew, Liam, Mike, Owen and Paul are back together for one last time to reveal what exactly is their favourite horror film of the noughties.

Following the technological apocalypse that occurred after Y2K, as predicted would happen by sane people with ready access to billboards in the 1990s, only a few of the human race survived. Those of us who were smart enough to build shelters and hide in underground bunkers emerged in early 2000 to find a desolate landscape, occupied only by gruesome, fierce mutants and rogue machines hell-bent on destruction. It was up to us to rebuild humanity. And we did, one step at a time. First we tamed the machines, then we wiped out the mutants, leaving only a few of them to run our football clubs or become politicians (satire) leaving no trace of the worst fate to befall our kind in human history. Once we’d tidied up a bit, we got on with what we do best; i.e. making horror films. We created a whole new subgenre known today as “torture porn”, mainly thanks to the splat-pack; a group of directors who were raised on a diet of exploitation films and grotesque horrors. Films like Saw, Hostel and Wolf Creek defined the 00s’. Saw particularly so by really bringing the torture porn concept into the mainstream. Who didn’t at least know of Jigsaw and the infamous “I want to play a game” quote? But that wasn’t all that our new millennium had to offer. What actually were our favourites of this brand new era? First up picking his favourite is Liam, with something a bit different… 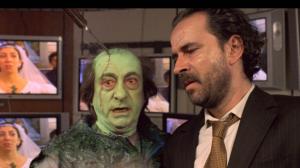 “Don Antonio, this is not right at all. You are dead, you can’t chat with me.”

This Spanish black comedy may appear an odd addition to a Halloween list but when you have a plot that contains; murder, dismemberment, psychotic obsession, arson, several attempted murders, blackmail and a belligerent ghost it’s pretty safe to say it belongs here. The title is a play on the Hitchcock classic Dial M For Murder released in Spain as “Perfect Crime”.

A revoltingly slick Super Salesman type has his perfect life smashed to pieces when he is left completely beholden to a woman he can’t stand the sight of.

There are a couple of problems with it. The first fifteen minutes are a bit worrying. It’s horribly mid 80s style American cheesiness. It even has Yello’s “Oh Yeah” playing in the background. But it does successfully show the man as a total moral vacuum and a sleazy, womanising jerk. The last fifteen minutes seem as though they were written by someone else, they don’t really fit and leave you wondering if he simply didn’t know how to end it. The middle hour makes it all worthwhile. His realisation that he is totally trapped, by this demented woman and her deranged family, starts a decline which only increases as he plots to find a way out. His paranoia and visions of a ghost are not helping.

This is an Oreo type of film. Don’t worry too much about the top & bottom, just enjoy the great middle bit.

“Boy, the next word that comes out of your mouth better be some brilliant fuckin’ Mark Twain shit. ‘Cause it’s definitely getting chiselled on your tombstone.”

The Devil’s Rejects is the sequel to Rob Zombie’s cult horror House of 1000 Corpses. But it’s a sequel with a twist, of sorts. The remaining members of the Firefly Clan (Sid Haig, Bill Mosely and Sherri Moon Zombie) are on the run from a maniacal sheriff hell bent on avenging the death of his brother in the first film. More of a road movie than a horror, the chase is on to bring the crazy hillbillies to justice.

The twist is that you aren’t siding with the cops in this film. Whether you want to or not, you’re going to end up rooting for the Rejects and you’re going to want them to come out on top. As they tear-arse their way across the county leaving an insane amount of carnage behind them, you still want them to get the better of William Forsythe’s sheriff.

The hillbilly horror has been around since a certain massacre in Texas shocked the world. But with brilliantly written characters; one of the scariest clowns in film history and some of the goriest deaths in quite some time, Rob Zombie’s darkly funny horror sequel stands as one of my favourites. Not just of the noughties, but of all time.

“What in God’s name are you doing down there Wilkins? Hiding Bodies?”

One of the hardest decisions of this project was the 00’s; so many great horror films to pick from! It helps that I’ve attended FrightFest for most of this decade. I’ve witnessed films on the big screen that many never have or will ever see again. It’s from FrightFest that my choice comes and one I was extremely excited to see when it was announced. Since that year, Trick ‘r Treat has become my Halloween film of choice.

I do like a good anthology film and horrors tend to work extremely well in this format. It’s rare to come across one where all the stories are rubbish as most work on some level. This one works on every level for me.

Trick ‘r Treat is a true Halloween horror; it’s not scary, it’s quite funny but it epitomises everything about the infamous holiday. The fun of dressing up, carving jack-o-lanterns, eating candy, urban legends and of course the real legends of that day. Then there is Sam, the spirit of Halloween, and the force of this film, taking his own story at the end, but always present as each of the previous stories unfold. Whilst his origins are never really explained, it’s fair to say that he maintains some sort of balance between the forces of evil and the human world. Those who disrespect Halloween – the dead and even the living – will feel the true force of Sam; and it very rarely ends well.

There are four main stories; The Principal, The School Bus Massacre Revisited, Surprise Party and Sam. It’s hard for me to choose a favourite, but pushed I would say it is Sam. It’s his look, dressed in an orange pyjama suit, wearing a burlap sack over his head and dragging his sack of candy and other feline treats behind him. He is one of my all-time favourite horror monsters. The way he appears through each story is rather creepy and retaining his mystery until his actual story just adds to his appeal.

Michael Dougherty has crafted a wonderful homage to Halloween. He has a great “monster” in the form of Sam, four excellent stories and the intelligence to interlink each story either by visuals or characters, giving a nice flow to the film’s timeline. Dylan Baker in The Principal and Brian Cox in Sam provide the stand out performances, whilst Anna Pacquin also has a decent role in Surprise Party. The rest of the supporting cast are fine, the script is great and the look of the film is outstanding due to Glen MacPherson’s brilliant cinematography. It never fails to entertain me and I really do look forward to watching it each year on Halloween.

The 2000’s was the first decade that I was actually old enough to go to the cinema and watch horror films. Of course, like a lot of people, I grew up watching them regardless of their recommended age certificates. However, the thrill of being allowed in to see films such as Thir13en Ghosts or Jeepers Creepers made up for the guff quality of a few of them. These were gory, horrible films that I could no longer be turned away from by uppity cinema staff.

Nevertheless, my personal relationship with horror films did dwindle slightly through the 00’s. My wife (then girlfriend) had no interest in them whatsoever, so we hardly ever watched them together. Arguably, it was Zack Snyder’s Dawn of the Dead remake that, watching on DVD sometime around 2006, rekindled my love for horror. If I dug deep enough, I could probably name 10 or so horrors from this decade alone that would be in my all time favourites for this genre.

Perhaps none more so than Ti West’s occult movie, The House of the Devil. Released in the US in 2009, it’s actually set in the 1980’s. Student Samantha (Jocelin Donahue) is desperate for cash and applies for a job as a babysitter on the night of a lunar eclipse. It’s revealed the work is not exactly as described in the flyer, and against the better judgement of her friend (Greta Gerwig), takes on the job anyway. Far from the torture porn movies of earlier in the decade, or even some of  the absurd goofy comedy horrors of the 80’s, this is actually an incredibly atmospheric movie, rich in tension, mystery and psychological drama. It builds itself steadily towards an unforgettable final few scenes with an almighty killer blow for a finale. It established West as one of the directors I get most excited about whenever I hear he’s making a new movie and holds up well on every rewatch. A staple for my annual Halloween diet!

“Justin, you gotta start putting other people’s needs ahead of your own. You knew not to bring anybody back here, but you did it anyway, didn’t you?”

The Last House on the Left is a notorious 70’s offering, that still shocks today, the BBFC shit bricks and banned it. This remake passed me by at first, but kept seeing it on ‘under-appreciated’ lists and decided to give it a poke. .John Murphy’s instantly recognisable score makes you realise this isn’t just another horror movie made by film company accountants and shit out like a hundred Lionsgate turds.

In this version the deranged escapees are led by Garret Dillahunt, and his performance is eerie, brutal and chilling and the utterly deranged Sadie is admirably portrayed by Riki Lindhome. Even Aaron Paul puts in his only decent turn outside of Breaking Bad.

It’s a simple premise, two girls fall into the clutches of the dangerous gang. They’re then subjected to a horrific and sustained attack and ultimately end up facing a final and brutal assault near their remote home. Their attackers end up staying in the home of one of the girl’s parents…

Then shit gets real. Cold, realistic, horrifying and emotionless. This is nasty film, but it all pans out in a way that just about keeps you in the realm of, ‘this could happen…..’, and that’s why it’s so terrifying. This is the film to see on Halloween for proper chills.