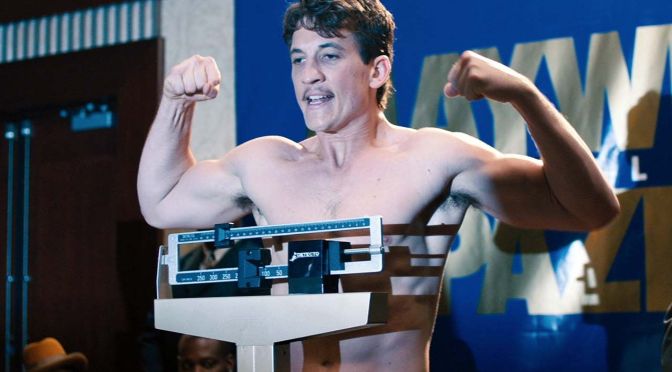 That time of year is here again, boys and girls. It’s “based on a true story” season. That time of year where we are all forced to sit and watch as many and varied true stories that are paraded out in front us to stare at, mope over and guess which one will be winning an award for its excellent depiction of a story no-one ever heard of before release weekend.

This week, it’s the story of boxer Vinny Pazienza.

A local hero and world champion boxer, Vinny “The Pazmanian Devil” Pazienza (Miles Teller) has dragged himself up from being a stepping stone to a card-carrying, belt-wielding force to be reckoned with in the ring. But it all seems to be over when a near fatal car crash leaves the fighter with a broken neck and no guarantee he’ll ever walk again.

But an inspirational story, such as this, can’t end there.

Vinny refuses surgery that would guarantee his mobility, but destroy his career, in favour of wearing a surgically fitted “halo” (essentially scaffolding for his head) in the hope that once healed he can train again and get himself back in the ring. After a torturous few months living like an invalid in his parents living room, Paz starts working on getting himself back in fighting shape in secret. Dragging in his trainer Kevin Rooney (Aaron Eckhart) to help, the pair turn the basement into a makeshift gym to work while Vinny is still wearing his headgear. Once out of his halo, the former champion works to get his arse back in the ring.

We’ve had a couple of really good boxing movies the last few years, from Creed and Southpaw last year covering the fictional side of things, to 2010’s The Fighter covering the true story side.

And honestly, all of those films are better than this one.

The opening scene for this film sets the poor tone as we watch Vinny spend all of thirty seconds trying to cut weight for his next fight, only for the crowd to be insanely happy when he does. The dramatic music kicks in, the crowd applauds and we are clearly supposed to be super-pumped that he’s able to fight. Problem is, I don’t even know who this guy is yet. The film tries to manufacture that “Rocky wins the fight” feeling in its audience without even introducing the character to us (or showing him fighting). He then montages himself to victory without anything close to a moment to make me care about him.

And it doesn’t really improve after that.

Maybe I am just a callous motherfucker, but nothing here got any kind of emotional response from me. The car accident and subsequent surgeries, the suffering, nothing really makes me want to see this man succeed. And it’s not because I don’t like the guy, it’s because the film hasn’t yet given me the opportunity to even get to know him. I mean, I care more about his parents (played very well by Kathy Sagel and Ciarán Hinds) and his trainer than I do about him because the movie just doesn’t seem to want to tell me about him. I’m just supposed to care, and cheer, and applaud, just because he’s a boxer? No.

Teller’s performance doesn’t help either. I don’t think he’s a good actor anyway, but here he’s not convincing as a fighter, or a man in pain, or a man crippled by life events he had no control over. I mean, this should be a simple thing to communicate to its audience, but neither Teller nor writer/director Ben Younger (who wrote and directed the awesome Boiler Room) seem to know how to put this across to those of us watching.

Eckhart, on the other hand, is the best part of this film. His insane portrayal of Vinny’s trainer Kevin Rooney comes across like a bizarre mash up of TV actors and characters, playing like The Wire‘s Domenick Lombardozzi is channeling Tony Soprano for most of the film. He is definitely the part of the film that’s the most watchable, as little praise as that may actually be.

Younger’s direction is perfectly fine, but it fails to bring drama to any of the areas that it really should. Boxing matches feel short and lifeless, with no real focus on the sport what so ever. While training montages and periods of quiet drama just don’t emote any feeling for the characters involved. It feels like it’s been put together by a committee that watched the great history of boxing films and tried to just put the bits they thought were best into one film.

Essentially it’s a greatest hits of boxing movie moments with little or no context to get you engaged. Considering both last year’s entries into this genre left me a blubbery mess by the end, I expected the same here. What I got instead was a tired, fidgety arse and an overwhelming shrug of the shoulders as people asked if I liked it.

Disappointment at every level. That’s pretty much how I felt about Bleed for This. 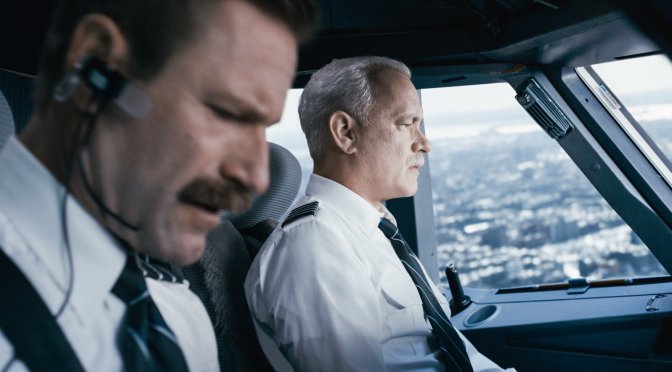 Round two of “based on a true story” season sees me a little conflicted. I wasn’t sure I was going to go see it because I really do not like Tom Hanks or the films he’s in. But on the other side of that coin, I adore Clint Eastwood as an actor (and even more as a director) and I try to watch everything he does. So when I finally made the decision to go and see Sully: Miracle on the Hudson I wasn’t sure what to expect.

Set in the immediate aftermath of US Airways captain Chelsea “Sully” Sullenberger’s (Tom Hanks) heroic ditching of his Airbus into New York’s Hudson River after losing both engines to a birdstrike, Sully tells his story and that of his co-pilot First Officer Jeffery Skiles (Aaron Eckhart). Specifically how they fought to prove that the events of January 15th 2009 played out in the only way that they could have.

Hailed by the press and the public as a hero, Sully is being railroaded by the investigative team who are looking to call the incident a “pilot error” and end his career. The captain has to fight the NTSB trying to blame him, the PTSD and the nightmares haunting him. With the press hounding him and his family, Sully tries to maintain his composure in the days following those few career and life defining moments in the cockpit.

Splitting the story between the captain’s predicament with the people investigating him and letting us get to see the two hundred and something seconds that made him a hero, Sully is a wonderful little bit of filmmaking that absolutely blew me away. More amazing is that it keeps the running time down to a tight ninety-six minutes, which isn’t just a miracle for an award-chasing true story, it’s a miracle for Clint Eastwood to make a film without flab and keep it down to a more palatable length.

Performance wise, I admit that I was very, very impressed with Tom Hanks. A man that I don’t usually bother watching on screen not only convinced me that he was an average guy in a beyond average situation, but he convinced me that he was struggling with it too. The man played it like your dad was the guy thrown into this extraordinary position; and like it was your dad, you desperately wanted to be there for him when things went sideways and to cheer for him at the good parts.

Now, I’m not going to go out and catch up with every Hanks film I’ve missed over the years, but I certainly won’t instantly dismiss any of his films from hereon in. Not for a little while anyway.

A little more understated, Aaron Eckhart was a pleasure to watch. As he and Hanks went mano-a-mano, moustache vs moustache, to see who could take the title of “most likely to have been fighting The Red Baron in a previous life” competition, the pair make a decent on-screen duo. The former Harvey Dent actor certainly holds his own with Hanks and makes the role his own.

Much less of a surprise, for me, was the quality in Clint Eastwood’s direction. I’ve loved the man for as long as I can remember and while his politics – and his chair berating – may be a little off for me, his films always deliver. Yes, even American Sniper and its rubber baby!

But what got me with Sully was something I wasn’t expecting. I remember the splash down happening all those years ago and I thought the same thing everyone else did: “Holy shit, the dude landed a plane in a river!” However, the thing that weirdly never crossed my mind was what people who weren’t on the plane must have thought. Eastwood does an amazing job of giving the audience a post-9/11 fear in the pit of their stomach while they watch the film.

Suddenly, we are seeing flashbacks of Joe Average public out of the blue watching another distressed passenger jet flying at building height in – not over, in – New York City. With very little effort, you’re sat with a puckered asshole as the combined fears of one of the biggest and busiest cities in the world comes true. It’s outstanding work from the veteran director.

The biggest problem with Sully is that there’s not much to say about it. It’s a good thing too, because I can tell you it’s an excellent film and you can just go and watch it and enjoy it. It’s a true story that almost everyone knows, so it’s more about the filmmaking and the performances than it is having to get every detail of a story no-one knows across. Suffice to say, in a weekend that has two “based on true events” Oscar-bait films, Sully is the one to watch.