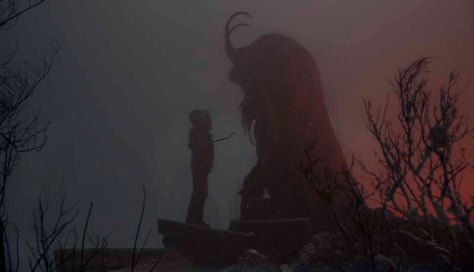 I have a funny relationship with Christmas. I love the festive season but not too early. Decorations in October? Adverts in November? Not for me, it gets on my nerves. But usually a week or two before the big day I get swept up in the holiday season.

This year my Christmas spirit arrived earlier than usual and rather strangely through the horror comedy Krampus, about an evil Christmas spirit, and I don’t mean your dad’s homemade sloe gin.

Krampus was written and directed by Michael Dougherty (the man behind cult horror Trick r Treat) and stars Adam Scott (of Parks and Rec fame) and Toni Collette (from The Sixth Sense), as well as a few other recognisable faces.

The film begins as a traditional dysfunctional family Christmas; unwanted family coming to stay, issues at hand and things not being ready on time. In fact the opening scene set in a shopping mall is brilliantly done.

Things come to a head when youngest child Max – after bullying by his cousins and the contents of his letter to Santa being revealed – stops believing in the real meaning of Christmas and accidentally invokes a horribly dark and evil incarnation of Santa, Krampus, encountered once many years previous by Max’s gran Omi.

The film plays for laughs as much as it plays for shocks and scares, which was something I did not expect going in, thinking it would be a straight forward horror.

Whilst it is a horror film and is extremely dark in places – horrible creatures taking children and so on – it certainly draws influence from the likes of Gremlins and Cabin in the Woods, playing up to many horror tropes. Evil gingerbread men and toy robots get as many laughs as they do jumps.

You also get a creepy feeling. Elves, snowmen, toys and reindeer should not be twisted and intimidating but here they are and with good effect.

Performance wise everyone is good but not great. No-one stands out as amazing but as a cast they pull together to make the film funny and very, very dark.

Krampus himself is a creepy and intimidating creature, briefly seen until towards the end, and you almost want the real Father Christmas to swoop in to banish Krampus back to the underworld.

With so many films, past and present, being overly saccharine and ramming Christmas down our mince pie filled throats and falling flat, Krampus almost scares you into believing in the true meaning of Christmas.

If you want to start feeling Christmassy, don’t bother with Love Actually, Muppets Christmas Carol or Die Hard, but instead watch this ho-ho-ho-rror and let Krampus make your spine tingle all the way.

(This article features a television episode not yet broadcast in the UK. It contains spoilers.)

So I just googled Plato and Aristotle’s theories on comedy (I go HARD every night, you guys). According to Plato, comedy is a little bit malicious. Its characters are ignorant and foolish and hampered by delusions of grandeur. According to Aristotle, comedy is ridiculous and ugly, its characters “lower types.”

Parks and Recreation makes its own rules every day, reimagining the comedy landscape as a place where good things happen to good people. These characters love and support each other. They know themselves and chase their own ambitions, which are great and worthy and never taken lightly. So much of what makes this show different is in the way it lets people grow over time. You can’t see all of that in one episode. But if you could, “Win, Lose, or Draw” would be that episode.

To start with, it’s a brilliant little study in the absurdities of the government process. Leslie Knope, Deputy Director of the Pawnee Parks Department, has run a hard-fought campaign for City Council against “legendarily stupid” golden boy Bobby Newport (played by Paul Rudd. PAUL. RUDD). This should be no contest; Leslie’s worked her whole life for this. Bobby’s only there because his dad runs the biggest corporation in town. He doesn’t even want the job, and he wouldn’t know what to do if he got it. Still, thanks to his campaign manager’s manipulations, Bobby could easily win this thing. Pawnee is a hot mess—case in point: in the event of an exact tie, the woman is thrown in jail—but sometimes it’s also frighteningly true to life. Tampering with voting machines, anyone?

And yet despite everything, the show itself isn’t cynical toward public service. When Leslie selects her own name on the ballot, fulfilling a lifelong dream and achieving one of her all-time happiest moments, we all get to pause and enjoy it with her. From the way she’s fighting back tears, it’s clear that the vote is its own kind of victory. Hard work is its own reward, and at the end of the day, even an imperfect democratic process is still pretty darn amazing—win, lose, or draw.

Spoiler alert: Leslie does win. But this episode works because we don’t feel like she has to. She already had her big moment in the voting booth, and it’s easy to imagine Leslie picking herself up and finding a silver lining. A loss would be better for Ron, because the man hates change. He still gets his milk delivered by horse. A loss would free Chris to date Ann. And of course, since Jerry forgot to vote, a one-vote loss would be hilariously poetic. There’s more than one person to consider here. No one achieves anything alone. That’s the Parks and Rec motto.

It’s fitting, then, that “Win, Lose, or Draw” is peppered with great relationship moments, as the whole team comes together for the big day. Ann helps Leslie keep her mind off of the election. Ron knows right where to find her when she goes missing. Ben holds her hand and writes her victory speech—and just her victory speech, because he never believed she’d need anything else (awww!). In return, Leslie tells Ben to take his dream job in DC. She puts a Washington Monument figurine in their very special box, and she lets him go.

It wouldn’t be the quintessential Parks and Rec episode without that box, would it? I keep all of my Leslie and Ben feelings in there. It’s where they put the things they sacrifice for each other. As Ron so adorably reminds his deputy, love isn’t about personal glory; it’s about unconditional support. Ben and Leslie probably have that embroidered on a pillow somewhere, because it’s just how they roll. They build each other up, and they’re not the only ones. When April makes a huge mistake in the office, Andy’s right there beside her, hiding under the table and planning a possible escape. In return, April helps Andy figure out his dream job. “Catch Your Dreams” really is this campaign’s theme song, in more ways than one.

But maybe the most remarkable thing about this episode is that it gives us all of those big happy tears and still manages to be absolutely hilarious. If you think sentimentality stands in the way of laughter, try watching this show cut from Leslie’s emotional victory hug to Bobby Newport’s concession speech (“Honestly, I’ve never been more relieved in my entire life”). There is genius everywhere here: Paul Rudd giggles at a boom mic, Jean-Ralphio shows up long enough to sing about insurance fraud, Ben tries an awkward non sequitur about jeans, Leslie is tempted by Joe Biden’s home phone number, and Adam Scott literally wipes his drink off of his tongue, which might be the hardest I will ever laugh about anything in my life, and I’m fine with that.

“Win, Lose, or Draw” wins. On all counts. Care to join me in some victory waffles?

Kelly is an aspiring television writer who’s currently trying Brooklyn on for size. Find her online at TVmouse, where cheese is strongly encouraged.