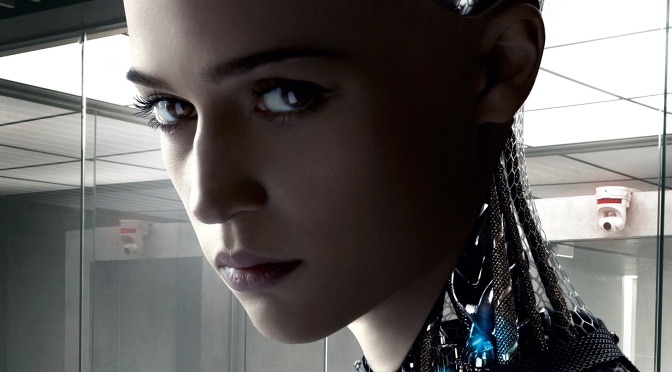 Never mind what I think of this well plotted, intelligent and entertaining sci-fi drama; how does Ex Machina make you feel? 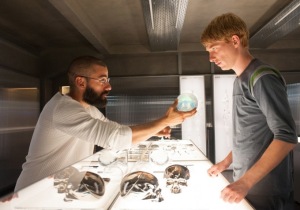 Deus ex machina, literally “God from the machine”, is presumably a phrase you’ve come across at some point in your life. I was first made aware of its proper meaning by a friend of mine a long time ago when talking about some comic book or other. He explained it as like when a God steps in at the last minute at the end of a Greek tragedy to save the hero (such as Athena stepping in at the end of the Odyssey). It’s probably why the phrase is sometimes also referred to as “the hand of God”. Traditionally introducing a device – divine or otherwise – when the characters are backed into a corner to produce a happy ending.

Think of those bloody eagles in The Hobbit: An Unexpected Journey. All seems lost, the characters have no tricks left up their sleeve, doom is imminent. Suddenly, *poof*, just like that they’re rescued by some massive birds out of nowhere and all is well again… save for the fact they’re now stranded on the top of a rather tall mountain, but that’s besides the point.

Quite how the film’s title Ex Machina relates to the plot of Alex Garland’s directorial debut is fairly self explanatory. Suffice to say, ‘God from the machine’ is more appropriate than (the erroneous) ‘hand of God’. Garland is already familiar to most cinephiles as a novelist and the screenwriter behind some of Danny Boyle’s best work; including 28 Days Later, Sunshine and the original novel for The Beach. Not only that, he’s recently found more cult success by being the mighty pen behind Judge Dredd and his deadly lawgiver in 2012’s action thriller Dredd. Given that his name is also attached to an upcoming Halo film, you would be forgiven for perhaps expecting this sci-fi about potentially the most advanced form of Artificial Intelligence to also be rather loud, colourful and explosive.

Forgiven, because you would be wrong. Just like the script for the similarly ominously low-key and unsettling sci-fi that Garland also adapted, Never Let Me Go, the role of Ex Machina appears to be less about dazzling you with special effects (as amazingly well realised as they are with the mechanical Ava gliding across the screen, full internal cogs whirring inside of her transparent abdomen) and more about making you think. Or, I suppose, as fitting as it is, making you feel. Putting logic to one-side and using your imagination and full range of emotions to be affected rather than to analyse. To really be a human and not a machine.

Which leads me on nicely to the plot! It revolves around the talented Irish actor Domhnall Gleeson’s character ‘Caleb’, an American programmer working for a company that owns and develops the world’s leading internet search engine. We are first introduced to Caleb as he’s sat at his desk, white headphones protruding from his ears with stilted sound emanating as he checks his email inbox to find he has won a competition. His prize is to spend a week with the company’s CEO, Nathan, at his wilderness retreat. What transpires is that Nathan (played by the often underrated yet exceptionally talented Oscar Isaac), despite being a heavy drinker, believes he has created a genuine Artificial Intelligence called Ava; and Caleb is to be the lucky recipient who gets to perform the Turing test on it to determine if it (or ‘she’) is sentient or not.

Throughout the course of the film, Garland attempts to navigate a few of the more theoretical issues and complexities of AI by having Nathan drag Caleb away from his very analytical approach to the Turing test. He’d rather Caleb simply express how he feels when communicating with Ava, which is a perfectly acceptable way to prevent the film being bogged down in philosophies and jargon. It can be a little grating when films make characters speak out loud their emotions; if an actor and a script is good enough, you shouldn’t have to have someone explicitly state that they feel anything, you should just be able to see it and know. However, such is the type of film Ex Machina is that it really does work to quickly and succinctly help you understand the nature of the relationship developing between its three primary characters.

Speaking of whom, Ava’s plight is wholly sympathetic whilst being shrouded in a menacing aura. Trapped for her entire existence in a small glass room by Nathan, never experiencing the outside world or anything beyond the confines of her cage, she seemingly begins to form a bond with Caleb. Quite possibly due to the way she looks (rather like the stunning actress Alicia Vikander that’s playing her, funnily enough) you immediately empathise with her; you want her to be free. It’s a natural gut instinct to feel that putting someone behind bars who hasn’t done anything wrong is unjustified. In a way, it makes her the good guy. But being behind a window, separated from human contact like that, it does also add an element of danger to Ava. Before Caleb first meets her to commence the experiment, he notices a slight crack in the partition, which suggests either someone was trying to get in, or that something was trying to get out. As Ava declares that Caleb is the first human she has met other than Nathan, it sets the tone for what’s to come very fittingly. Some of the conversations that Ava and Caleb have during their sessions are both fascinating and, like other parts of the film, genuinely amusing. The film is not completely bone dry; as much as every scene gives the impression that it means something, how funny it can be takes you by surprise on occasion.

There’s also quite a few themes that Garland brings up along the relatively tight 108 minute run time. An impending robocalypse being one of them, as you might expect! The thought of the human race being wiped out by a race of super computers is not an entirely new theory, but is always terrifying to think about. Garland also brings the role of sexuality into his film, and how it’s required in a species. That it’s a need to be a sexual entity, rather than completely sexless, in order to force an organism (for want of a better word) to grow and to evolve. If you’re not already wondering why Ava is designed to look female at the point in the movie when Nathan explains his decision, then it’s a good point for the audience to re-evaluate what has been seen so far. Why would Nathan, a man, attempt to create self-aware intelligence and choose to make it look, act and behave like a female? What is his purpose? There’s a lot of questions raised if you look for them beyond basically “why is character [a] doing [this]”.

Another topic that is called into question is that of information gathering. Putting your life into a search engine term that creates something as a whole to define who you really are is quite a scary concept. The idea that Nathan’s company would scan everybody’s phones, their cameras, their profiles and search history (illegally, mind you) in order to make his robot learn to look and act more human is deeply disturbing. You also don’t have to be a genius to work out that it is in no small part a social commentary on what we are already doing in the real world. Or even what certain companies who own internet search engines could well be doing with that information right now. You have no idea – and more worryingly, no control.

It’s also a bizarre coincidence that Domhnall Gleeson was in the Black Mirror episode ‘Be Right Back’ where he played a lifelike synthetic representation of his character after an artificial personality profile was compiled using data from his online presence. Both this episode and Ex Machina attempt to make you aware of the digital footprint you are leaving every single day and how costly that may be.

There’s a quote from Ex Machina which has appeared in the theatrical trailer, where you hear Ava say to Nathan:

“Is it strange to have made something that hates you?“

There are many ways to interpret this line. At first, you could easily interpret this as Ava, a machine with a true consciousness, simply detesting her manufacturer for locking her away, depriving her of both the world outside and the man she has apparently grown to act like she loves. Of course whether this love is something programmed into her, something she has developed naturally, something unquantifiable, or whether it’s not really love at all, is not really the point being made in this particular line of dialogue.

Another way to look at it is as a genuine question about whether it is normal for a creation to hate its creator? Again, drawing on themes not explicitly discussed such as religion perhaps and even looking at the role of father/daughter relationships. A rebellious teenage girl doing whatever the opposite of her dad wants, or man’s spurning of a God who supposedly loves them, or rather more sinister is the idea that a machine is looking down on an inferior species with a cold and calculating disdain. There are many ways to look at it and the beauty of the film is that it never closes off these avenues for you. It’s open, it’s out there, and it’s for you to decide what you think.

As the plot goes on, things get a bit weirder without ever straying too far from its slightly predictable basis. The manner in which the final act will occur is not completely hidden from the viewer early on – and it does feel slightly rushed to get to the main point. But it is yet another clever example of the difference between man and machine. It’s why success in a species cannot be defined by who will live the longest, or whose population will be densest, or even who is the most intelligent. The smartest man in the room is not always right. However, as a proposal of some interesting ideas, acted out well by its cast with a completely engrossing plot and some sharp writing, it’s an entertaining way to spend an hour and a half watching the birth of an artificial intelligence that does not require your clothes, your boots or your motorcycle.

Ex Machina is in UK cinemas right now and will be the main review on this week’s special ‘Artificial Intelligence’ themed Failed Critics Podcast.