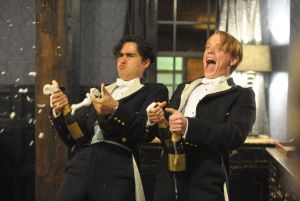 The Riot Club is an adaptation of a play called Posh written by Laura Wade, who also adapted her production into the screenplay for this very British drama. In the director’s seat is Lone Scherfig, the woman responsible for the 2009 coming of age film, An Education, starring the splendid Carey Mulligan.

Hopefully, by now, those of you who have listened to the podcast should know that I’m not actually a 16-year-old girl. Hard to believe, I know, but it’s true. I’m actually a nearly 30-year-old bloke. Therefore, relating to the story of a school girl becoming a young woman should in theory be very difficult for me. However, there are some truths about Carey Mulligan’s character ‘Jenny’ that are universal, regardless of your gender, education or upbringing. At some point in your life you will have choices to make about what direction you want your future to go in; will you go to University or not? Who do you start a relationship or friendship with? What are your priorities in life? All things that are addressed in An Education and that you as a human being at some point will also have to deal with.

The reason I bring up An Education is three-fold. Firstly, Scherfig directed both it and The Riot Club. Secondly, the fact that it deals with a young person fitting into a new group of friends that ultimately reveals some truths about their own identity is also linked thematically. And finally, it makes a point of idolising the oldest higher education institute in the English-speaking world, the University of Oxford. I may be biased given the fact I work in Oxford, but it is a very beautiful city and given the Uni’s reputation, it’s no surprise to see it glorified in this manner.

What neither film actually capture perfectly is the town and gown split. The relatively “ruffian” locals who come into the City Centre or Cowley Road on a Friday or Saturday evening from surrounding areas like Blackbird Leys and Rose Hill, the real locals (aka the ‘town’) and how they do sometimes clash with the students of the city’s two Universities, both of which have a large intake of public school leavers (aka the ‘gown’). But, I guess the point of the film is mainly to highlight one tiny section of Oxford residents, and that isn’t the ‘town’.

Whilst the Riot Club is fictional, it is actually an exaggerated satire of the very real Bullingdon Club; an exclusive unofficial society for upper class students at the University who are banned from gatherings within 15 miles of the city due to some rather lairy antics in the past. The film tells the story of two freshers, from their recruitment and initiation, to the eventual catastrophic debauched celebrations at an evening’s dinner party where the main bulk of the movie takes place.

The first recruit is Alistair Ryle (Sam Claflin, who you may remember as that pretty good young-ish guy from The Quiet Ones earlier in the year (also set in Oxford), or as the blonde fellow from the recent Hunger Games entry) whose family have attended Oxford and stayed in the same residence for generations. At the same time, Miles (Max Irons) is offered membership and sees it as an honour; a bit of a laugh with some similarly minded individuals, but begins to alienate his less-well-off girlfriend Lauren (Holliday Grainger). Both Alistair and Miles are intelligent, well-educated chaps, yet they strive to adjust to their surroundings in very different ways. After being humiliated by his parents and then mugged at a cash point, Alistair seeks more than just friendship from within the group, but rather he demands respect. Miles, settling into life at University a bit better, soon finds himself the rival of Alistair and his left-of-centre political views do not sit well with a selection of his fellow chums.

What seems to be putting people off The Riot Club is the fact that the central characters are these posh toffs who, for whatever reasons, you are supposed to hate. They’re petty, crass, obnoxious, arrogant and Laura Wade’s script pulls no punches in showing how horrendous these people can be. However, that they are irritating toffs who hate the poor (who they deem to be anyone who can’t throw £3500 away on one evenings celebrations) and therefore you instinctively despise is sort of the point. Why do you hate them? Is it envy? Is it because they’re “better than you”? Just why should you feel that way towards them simply because they are rich? It acknowledges them as people who you perceive in one way before it tries to add some depth and hopefully make you understand something about yourself. It isn’t written in a way that you’re supposed to hate them just for being rich, but rather hate them for the choices they make. Understand who they are and where they come from and then make your decision about them. 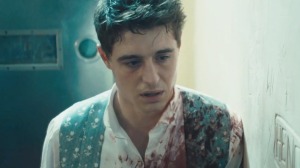 Rest assured though, the decisions that the characters make by the way are quite despicable and will have no issues in influences you towards thinking of them as utter, utter bastards. Rampant shitgibbonry occurs in almost every scene, from looking down their nose at everyone (including each other) to “ladies man” Harry (played charismatically by Douglas Booth) and his botched attempts at hiring an escort (Natalie Dormer) for the group. Even the sometimes seemingly innocent members of the club, such as Sam Reid and Jack Farthing’s characters, all show their dark sides at points. Nobody is left with any shred of dignity for their behaviour, though some do have more culpability than others. Allowing Miles to show some degree of humility in his actions does detract ever so slightly from the point of the film, although it does at least allow the viewer a window into this world without feeling all grubby afterwards for liking any of them.

It’s quite a good and challenging movie in that sense. It may have some issues with cramming everything it wants to say into 110 minutes, rendering a couple of the characters little more than caricatures or cartoonish villains, but it makes its point well and is very affecting. Combine this with the acting, which is of a high standard all round too, and the moments where you’re supposed to feel strongly one way or the other about the characters, it all comes together nicely into one big incredibly frustrating but well made film.

Owen will be talking about The Riot Club with Steve and Carole on the next episode of the Failed Critics podcast. Or you can find him on Twitter or comment below if you want to tell him how wrong/right he is!