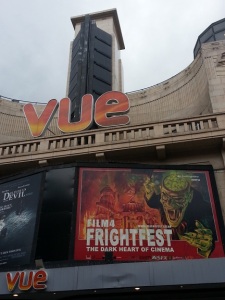 Eight years ago I first came to FrightFest, back when it was still in the Odeon at the bottom of Leicester Square, where I did 2 years before it moved venue to The Empire at the top of the square. Here the festival stayed for 5 years; each year it grew in audience and also the amount of films being shown at the event. I really enjoyed the festival during its run at the Empire. Their screen 1 was superb and with 1000 plus horror fans sometimes the atmosphere was astonishing. Due to Empire’s move to an IMAX screen after last year’s festival closed, we were the last people ever to see a film in that screen 1.

This year the Vue cinema, still at the top of the square, became home for FrightFest and, with it, the festival’s biggest changes and challenges. Over 600 passes are for the full weekend and the biggest screens at Vue hold just over 400 seats; the solution was to have 3 main screens, Horror, Film4 and Arrow. My pass was for the Horror screen though I had wanted the Film4 screen, but I’m not sure if that made too much difference in the end, aside from being with the regular FrightFesters. Films would rotate round each screen except for the opening film, The Guest, and closing film The Signal; both would start at the same time while the rest of the screenings would have staggered start times, which actually worked really well. It kept the flow of people moving around the cinema quite nicely. Another reason was to allow guests of the film to be able to do Intro’s and Q & A’s for each showing. Maybe this did have an impact on the number of guests attending the festival as they could be at the event for 5 or 6 hours instead of a few hours for 1 screening; or maybe I just missed a lot of the guests. I don’t seem to have as many pictures with people as I normally end up with, that’s for sure.

Alongside the main screens were 2 discovery screens, both holding double the amount of seats that these screens in the Empire would have. At first I thought that this was possibly the festival’s biggest problem. You could potentially lose over half of the screen’s audience to discovery screens or not wanting to see a film and sometimes by just missing them like I did twice by talking to people in the bar! On the Friday I was just missing that great atmosphere that 1 screen gave the festival. By the first evening showing of Dead Snow 2 on the Friday – funnily enough not in my screen but the Arrow screen – the FrightFest vibe was starting to take hold and I began to really start enjoying myself. The weekend just kept getting better and better.

There were some hiccups. To get discovery screen tickets I had been issued a bar code and the idea was to scan in the bar code at the tills and pick your discovery tickets. These became available after the first film and I got to the till pretty quickly. I am in a group of 6 and we had organised ourselves before the festival so we knew which films we needed tickets for and how many. The problem when they tried to scan in the bar-code, it had faded and it was over a perforated fold, it was extremely difficult to get the scanner to read any of our 6 tickets. It would eventually pick it up, but it took 40 minutes to do 2 films. In the end the manger re issued the bar codes with no perforated paper and we ended doing 6 more films in 20 minutes. Having held up the queue long enough we bailed and went back the next day to pick up the rest of the tickets. Once over that initial problem the new system worked a lot better than having to queue up at 8am every morning and actually only a few showings fully sold out. A lesson learned for next year, print the bar codes at the festival and don’t panic over screens selling out!

Really though I have to say that the Vue worked better than the Empire for a number of reasons. The biggest fault at the Empire was that the foyer contained the media wall, the merchandise shop, the bar area and confectionery stand, it became quite claustrophobic at times. Stopping to talk, get a signature or photo just added to the confusion. While the Vue being on numerous levels meant that the media wall was in the foyer with the confectionery tills, the merchandise stall was next to the bar on the first floor, the bar area was a decent size and a great place to socialise where you never felt you were getting in the way of anyone. I also feel the actual screens gave me a better experience. I usually sat in row D at the Empire and on many occasions struggled with subtitled films as I couldn’t read the subs due to people’s heads. Not a problem at the Vue, even from row D. Empire’s main discovery screen was tiny (around 100 seats) and sometimes didn’t sound very good at all. Vue’s Discovery screen 1 was superb, much bigger screen, and boy was it loud, which is what I like.

So the venue change, the format change and the discovery screen ticket allocation all improvements on last year for me. While discussing these topics with one of the main organisers we suggested only have discovery screen films on during the day programmes, allowing the main screens to be nearly full during the evening; something to think about.

As for the films? Well, you’ll just have to wait for Part 2 when we’ll give a brief summary of what was seen and what was worth seeing.

Welcome to this week’s Failed Critics Review, where for numerous reasons (too busy being a vigilante, boarding up his house for the impending Zombie apocalypse, being asleep, and having scurvy) we didn’t get to the cinema.

Oh, and our planned review of The Master was shelved because it’s only showing in ‘that London’ for a fortnight.

Never fear though, we still manage to fill over an hour with what we’ve watched this week, as well as our reaction to Disney’s purchase of Lucasfilm (and the announced new Star Wars films), and Steve does his best Anne Robinson as we go all Watchdog on the asses of the cinema chains we happen to frequent.

Don’t worry – we’ll be back to normal next week when we review Oscar-contender (it better be – James has backed it at 10-1) Argo.