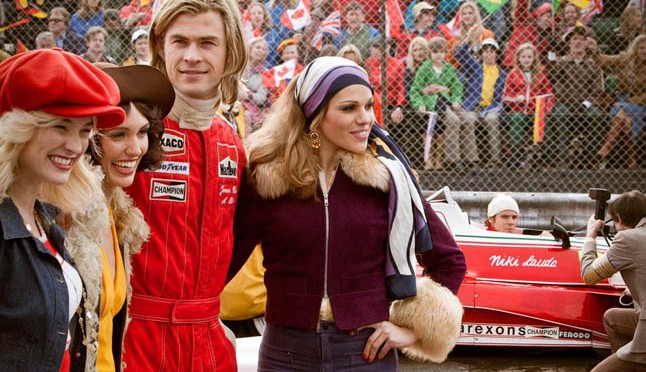 The events depicted in Ron Howard‘s latest film, Rush, took place long before I was born. I’ve only existed on this mortal plane since 1986, and never had an interest of my own in Formula One. I still don’t. However, my dad loves it. I grew up occasionally having to watch Senna, Mansell, Schumacher, Brundle etc on TV, but knew very little about the history of the sport. At that point in my life, I doubt I’d have even heard of British racer and playboy James Hunt or his constant feud with his equally talented but much more reserved rival Niki Lauda. As I grew older, I’d come to learn a little bit about their rivalry, but never really found the story that fascinating (probably because I didn’t really know that much about it, in fairness.)

That might partly explain why I had no great interest in watching Rush initially. I’d seen the trailer countless times on my various other excursions to the cinema. As far as the story of this historic rivalry goes, I was convinced all I needed to know was in the trailer. Laid out in exactly the same way as the plot would progress in the movie itself, showing you the beginning, the middle and the end. Basically, it was like an animated storyboard of every major step Rush takes. Despite not necessarily being something I was excited about watching, I was still quite furious about the 2 minute long spoiler ridden showcase – and yes, it is spoiler ridden, regardless of it being based on a true story.

Admittedly, the actual full movie was slightly different, in so much as the trailer made it look like the story of James Hunt, but it was actually slightly more fair to describe it as the story of Hunt from Niki Lauda’s perspective and how their rivalry drove them to become the men they were.

Never mind the fact that it was all laid out in the trailer then, I found Rush a surprisingly very exciting watch. Initial reaction from both my wife and I as we came out of the cinema was one of being incredibly impressed. I was rerunning all the tense races through my mind and remembering how Howard somehow managed to make even formula one seem quite exhilarating. I reflected on how I thought the more dramatic moments of both main characters lives were told in a not entirely sympathetic light, but in a very controlled way. At the time, it’s safe to say, I loved this movie.

The more I’ve thought about it since, the more little things there are that annoyed me have started to creep into my consciousness. Not anything that’s completely changed my opinion of the film, I’m just recounting some of the rather melodramatic moments. The scenes that I’m sure will be parodied endlessly in future. The camera focussing on Lauda in his car looking toward Hunt, panning over to Hunt who looks back at Lauda, then the camera is back on Lauda who waves, back to Hunt who waves, back to Lauda who nods, then back to Hunt who nods etc. It was a bit silly actually, but at the time I was caught up in the moment and loved it.

Whilst I’m talking about Hunt and Lauda, the best thing about the film is definitely the performances of Chris Hemsworth and Daniel Bruhl respectively. They have the appropriate amount of humour blended into their portrayals but also the right amount of seriousness and weight too. Bruhl captures that ratty look and pernickety / pedantic nature that the Austrian was famed for, but he’s never once the villain of the story. In fact, there is no villain here. There’s no heroes either, as Hemsworth’s performance as the larger than life, long haired, party guy may appear to be the most likeable, but through a combination of the writing and the acting, you understand how deeply tragic and lonely his life could be at times. The ego of the two men and how they are more alike than they realise in many respects is what keeps you compelled right through the finish line.

Contrasting with that are the support characters made up of a mostly British cast. I think half of the cast of the hospital sitcom Green Wing are in here in one guise or another. A lot of the support characters are somewhat peripheral in the sense that once their part in the story is done, then we move on and never get the chance to understand their overall part in the proceedings, what role they play in shaping Hunt and Lauda in the latter stages of their story. But the main two are at least Oscar nomination worthy. Bruhl perhaps more than Hemsworth, but either getting a nod for lead would not be a surprise at all.

It still has some very cool racing scenes, though. I’m not a fan of F1 (as I mentioned) and even though some of the races take place in a montage style, it was still fun and tense. Enough to earn the film an Oscar? We’ll see. It’s definitely set up that way, though. To compare it to last years dramatic true story that came out around the same time and was primed for many Oscar nominations, Argo, I can see Rush achieving a similar level of attention. I’m not sure it will do quite as well as Argo did in the States, but for my money, Rush is the far superior film.