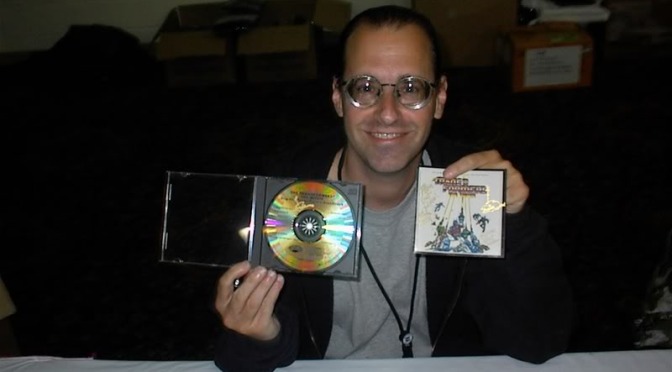 In between rocking out to synth and metal movie soundtracks, Matt is a frequent writer for the site and contributor to the Failed Critics podcast. Here he tells us about one of his personal icons, the King of Synth, Vince DiCola.

“Movie scores today sound similar to me in the sense that there are some great composers out there who continually use orchestras. I love orchestras, but I’d love to see synthesizers being used a little bit more again…” 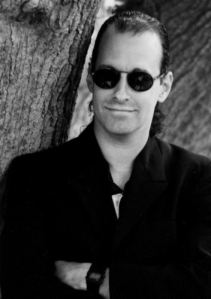 Movie history is full of great and celebrated music composers. Alan Silvestri and Hans Zimmer particularly come to mind when thinking back on some of my favourite movie scores from the 1980’s and onwards. But there is one individual that does not garner quite so much recognition, at least by name, but certainly will be recognised by most movie fans at least sonically.

Vince DiCola cites Keith Emerson (of Emerson, Lake & Palmer) amongst his biggest musical influences. DiCola got his first major break in the movie business as an up and coming musician and composer when he was recruited by Frank Stallone to work on the score for 1983’s Stayin’ Alive. Whilst the movie itself bombed, the score raised some eyebrows within the industry and Vince earned himself Grammy and Golden Globe nominations for his work.

When Sylvester Stallone returned to direct and star in 1985’s Rocky IV he once again turned to DiCola to become involved in the project after the excellent reception of the Stayin’ Alive score.

Rocky IV had a tremendous soundtrack, but it is Vince DiCola’s score that is the most crucial and most remembered piece. 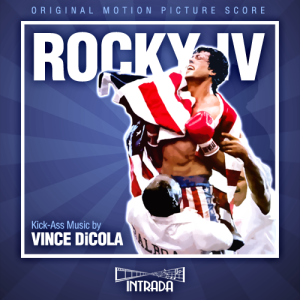 It goes without saying that Rocky IV was a brilliant example of 80’s Americana, both in film and its excellent
soundtrack. The Rocky IV soundtrack spawned a number of Billboard hits, including Survivor’s ‘Burning Heart’ (a #2 hit), James Brown’s ‘Living in America’ (featuring the B-Side ‘Farewell’ by Vince DiCola) and the epic ‘Hearts on Fire’ performed by John Cafferty and Beaver Brown Band which was also written by Vince DiCola.

But the most endearing pieces from movie, the ones forever seared into the memory of fans and movie fanatics, are from Vince DiCola’s score.

It is one of the most copied, parodied, inspiring and famous pieces of music in movie history. The synthesized sequence ‘Training Montage’ was such a strong part of the Rocky IV score that it made into the soundtrack also. As per the image below, it was parodied in comedic fashion to great affect in Team America, has been used in dozens of TV commercials and popular series such as Family Guy. It certainly plays a huge part in the build-up to the climatic final fight in Rocky IV and music is the perfect example of how Vince DiCola’s work may escape you by name but you will probably be familiar with him by this particular track if not more. 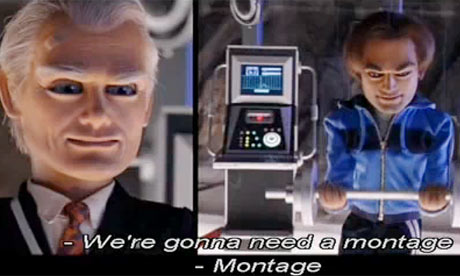 Sure, Rocky had a montage but it wouldn’t have meant shit without the accompanying piece by Vince DiCola.

In the United States, the track ‘War’ from the score was regularly used during the 80’s and 90’s during NFL broadcasts so will be hugely familiar to US Sports fans and is an excellent sequence in its own right. Whilst the score was bizarrely awarded the 86′ Golden Raspberry, time and reflection has been tremendously kind to DiCola’s work and it is fondly regarded as a rabble-rousing and nostalgic classic.

Despite the scathing response to the Rocky IV score from some circles, it brought DiCola’s work to the attention of the producers for 1986’s Transformers: The Movie. DiCola auditioned for the part with an original piece called ‘Legacy’ which did not make into the final score for the movie but featured all the hallmarks that fans of the movie came to love.

Whilst DiCola’s work only features in one vocal track from the movie’s soundtrack (Stan Bush – Dare) the movie score is entirely his own. DiCola was given a free license to work from with only the aid of storyboards to guide his creativity, an experience that he later stated he was entirely unused to but thoroughly enjoyed, culminating in an exceptional original score.

A particularly emotive piece is ‘Death of Optimus Prime’, which is the accompanying music to the scene in which Auotbot leader Optimus Prime passes the Matrix of Leadership to Ultra Magnus on his deathbed, following his mortally-wounding battle with Megatron at the start of the movie (Spoiler Alert!).

It is a piece that is my own personal Kryptonite and I still cannot listen to today without shedding tears; the passing of a childhood role model with such a harrowing theme takes me to the saddest parts of my youth. In some ways I liken the heart-wrenching emotion of this song to the passing of my own father, it’s that strong of a piece.

The Transformers soundtrack also branched into areas of popular culture. The retro gaming classic ‘Turrican’ from 1986 features a rehash of Vince DiCola’s ‘Escape’ as of its primary themes (thanks to Andy Godoy from the Retro Gaming Daily Show for that one!). The ever popular anthem from Transformers: The Movie called ‘The Touch’ , performed by Stan Bush, even made it into a scene in Boogie Nights during a rather startling musical audition for Dirk Diggler!

As a massive Transformers fan, finding this soundtrack in the 90’s was not easy, particularly pre-internet era. I had to travel from Stoke-on-Trent to London’s HMV Trocadero to buy the Transformers: The Movie soundtrack on CD, but its a nice personal story for me and one my most prized possessions.

You can see the man himself with the most valued of all of my music collection in the header image!

It saddens me greatly when seeing, or hearing the negativity surrounding the Michael Bay Transformers movies and how they truly scar the legacy left behind by Transformers ’86, both in the brilliant animated movie and its sensational 80’s synth/metal soundtrack.

That said, DiCola has carved himself an excellent legacy and his body of work spans over several movies, solo releases and numerous video games, most recently returning to work on the Transformers edition of Angry Birds. Vince DiCola may not be a household name, but he probably sits on the CD shelves or MP3 collection of countless movie and video game fans.

There are few musicians that have profoundly affected me in moments of sheer delight and even sometimes in mourning as Vince DiCola. His work during my childhood in particular has created memories that will last a life-time and I still enjoy immensely even in my 30’s. I can only hope there is another big movie project in the future for Vince that might just bring him into the kind of notoriety that his life’s work deserves.