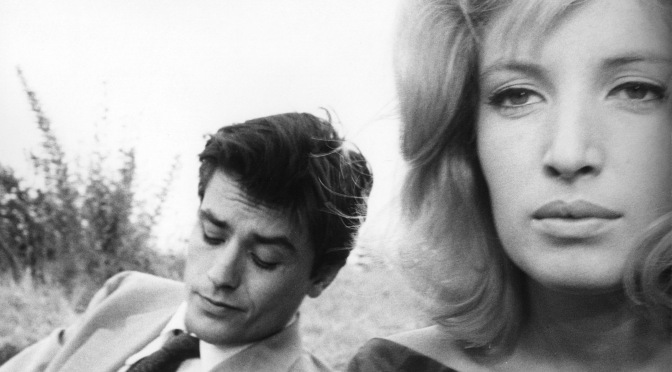 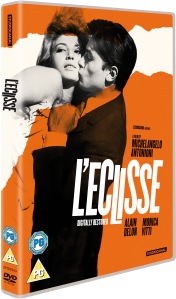 To term a film ‘narrative cinema’ suggests that a movie is constructed in a very formulaic manner. A structure fitting a pretty basic beginning, a middle and an end pattern, telling a story; it gives the audience a feeling of familiarity and if told well, then a reason to care about characters and events that take place therein. It’s simple, reliable and oh so difficult to do right, as the dozens of multi-million-dollar Hollywood pictures released one after the other on a conveyor belt of boring, repetitive, derivative tosh will no doubt tell you.

That rule book is virtually torn to shreds in Michelangelo Antonioni’s third entry to his trilogy, preceded by L’Avventura (1960) and La Notte (1961). In both writing and directing this poetic drama about modernity, life and love in the 20th century, Anonioni’s narrative is one of an anguished portrayal of human emotion and of the flippancy that defines our species. It follows Monica Vitti leaving her unhappy relationship to start another with an arrogant Roman stockbroker, played by Alain Delon. They argue, they romance, they love each other too much (or not enough as the case may be) and L’eclisse characteristically breaks away from conventional narrative to mill about a bit, contemplate stuff and generally be European.

Whilst it’s commendable for its audaciousness in playing around with a customary structure in order to develop something unique and capture an awareness and atmosphere identifiably of its time – particularly when you consider Godard was in the midst of revolutionising cinema with his nouvelle vague movement – it is perhaps what one might label a “film makers film”. Not one to savour for regular Joe movie fans (myself included!) It’s stylish with some fantastic architectural photography captured by cinematographer Gianni Di Venanzo, but most definitely not a film to watch with any distractions around. I struggled to enjoy it as an experience on the same level to which I was appreciating how superb the restoration was on this DVD by Studiocanal. The atmosphere is dry, cold and distanced mimicking Antonioni’s view of the world at the time, not in keeping with my own viewpoint. His disdain for the modern world and its hindrance on forming relationships is at its peak during a confusing (albeit well edited) last five minutes.

Indeed, it has been championed by auteurs such as Martin Scorsese, praising its ‘liberating’ final sequence; discarding its characters entirely to shoot a despairing vision of the world. Or, at least, that is just my humble opinion. I’m sure there are countless other opinions on this iconic conclusion as the vast majority of the conversations are open to interpretation in their true meaning. Although the theme of hope and faith (of a non-religious variety) are brought up throughout the film, if any of those interpretations of the ending are optimistic, I will be very surprised!

If your film palette is more sophisticated than the average punter’s, or if you are interested in the history of narrative cinema, then I would recommend those of you to give L’eclisse two hours of your life. You may find something inspirational in this highly regarded classic. And, if you are going to give it a go, then saying the always reliable Studiocanal DVD / Blu-ray restoration (specs below) will be the next best thing to seeing it on the big screen is an understatement.