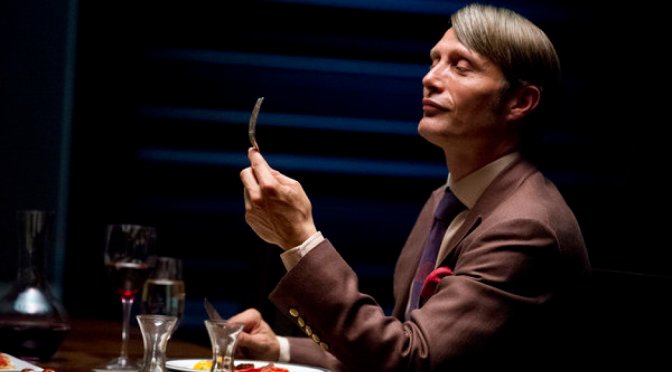 It’s about time somebody entered Hannibal into our 100 Greatest TV Episodes series, and Andrew is just the man to do it. Starting with the pilot episode of the hit NBC show about a cannibal psychologist seems as logical a place to begin as any. 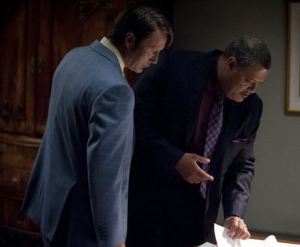 It was always going to be a tough sell. Basing a TV show or a film on a well-loved book, or series of books, always brings the nutters out of the woodwork. The same can be said when you try to make television shows with a much doted on film series as your inspiration (we all remember that Robocop TV show, right? Or the immeasurably bad decision to make a Rambo cartoon?). So surely any TV exec worth their salt would know not to entertain an idea that would attract rabid, feverish fans from both directions. Surely.

The announcement of a TV show based on Thomas Harris’ novels had many, myself included, going extra-strength crazy at the mere notion. Any project that included the recasting of Sir Anthony Hopkins was sacrilegious and a recipe for complete disaster. The announcement of Mads Mikkelsen taking the role made it even worse. My reaction was not dissimilar to how others have reacted at, say, Heath Ledger being The Joker, or Ben Affleck playing Batman. I’m a fan of Mikkelsen, but I was convinced it was a poor choice. Wait, what? Laurence Fishburne as Jack Crawford? What are you playing at? I haven’t been so dead against a TV show since someone likened Mad Men to The Sopranos!

A few months later and I’ve given in. I can’t say it’s pants until I’ve tried it. So I grab my coffee and my remote and, not completely willingly, wade in.

Starting in the only way a show with this kind of pedigree in its name could, we are thrown into a fresh crime scene. Blood splattered across walls and oozing across the floor as a corpse is unceremoniously zipped into a body bag. A mysterious figure is standing, watching as police and CSI tackle the unimaginable scene in front of them.

I turn to my wife. Angry. “They’ve gone and made it a bloody procedural! It’s NCIS-fucking-Hannibal! CSI-Goddamn-psychotherapy!”

Without a word of dialogue being spoken, the figure, which fans will quickly recognise as being Will Graham (Hugh Dancy), appears to walk backwards through the scene. With the crime apparently reversing itself and the bloody display returning to the serene home it was, we begin to see how Graham’s mind works.

Replaying the crime, the psychologist walks us breath by breath through the scene and the events of the evening. Giving us as deep a look at Graham as he wants with the killer, uttering the words soon to become synonymous with Will and his methods, indicating that what was done was planned, premeditated and coldly calculated. “This is my design”. The scene plays out with an air of menace and moves on.

The next ten minutes or so, we are treated to the standard cop drama steps. We are introduced to Laurence Fishburne’s Jack Crawford, the man at the top of this particular FBI food chain and the man about to pull Will Graham into this story for us. Some background info, a little forensic work, lots of scene setting and a quick glance at a suspect and his inspiration. All typical shots for a crime show’s pilot. A post-mortem scene, a stroke of brilliance from Graham and a line of dialogue sure to put some off their dinner softly walks us to what we came for. The first appearance of our titular character.

In a surprise move for a show clearly trying to break out and be its own thing, introducing Hannibal to the viewer with Bach’s “Aria” as musical accompaniment was a strange move. But it works. It instantly conjures up images of Sir Anthony Hopkins’ Hannibal and we’re given time to relate to that as we watch him eat.

I wasn’t sure how to react if and when Mikkelsen’s real accent came from my speakers when Lector speaks. It’s not something I would usually fixate on, but it seems an important detail for a franchise known for Hopkins’ dulcet tones. In truth, I was simply indifferent. It didn’t matter. Hannibal’s mannerisms are the important thing and Mads brings them beautifully. His calm demeanour, the air of danger and his penchant for civility all acted in such a magnificent way that even the harshest of critics were starting to relax.

It takes a little over twenty minutes for Hannibal and Graham to be in the same scene. And boy is it tense. Will’s damaged, misfiring psyche clashing with Lecter’s cold calculation. It’s an uncomfortable scene as the men are presented immediately as polar opposites, but there’s a strange and intriguing atmosphere suggesting they are more alike each other than different.

The pair’s next meeting is the most poignant of the episode, and maybe the season. Visiting Will at his home, Lecter brings a dubious breakfast for the pair to share as they discuss Jack, the case, and size each other up. Substituting his couch for the breakfast table, Hannibal psycho-analyses Will over scrambled eggs and a coffee. It’s a beautifully dark scene. Superbly shot and oozing with tension.

It’s this scene you’ll remember. As the episode wraps up and the foundation is set for an edgy thriller, it’s this scene that left an impression. The pessimist in me has accepted the show, it’s been brilliantly introduced and it feels new and I’m very willing to give it a few more episodes to see if it holds up (it does, very well). But that breakfast scene feels like genius the more I recall it. As if they weren’t just talking to each other, they were talking to the audience. Not all of them. Just the few, like me, that went in ready to hate it. We went in jaded and cynical and this tense scene between the pair was absolutely speaking to us as Hannibal suggests that they could perhaps be friends.

“I don’t find you that interesting”

‘Brooker’ is the latest debutant writer for Failed Critics (although he has written extensively on video-games in the past) and can usually be found over on Twitter – at least until we coax him back here to write some more! The rest of our 100 Greatest TV Episode articles can be found here.