Long-time contributor to Failed Critics, Paul Field, recently reviewed Dangerous Game for the Independent, which unseated United Passions as “the worst football film of all time”.

END_OF_DOCUMENT_TOKEN_TO_BE_REPLACED 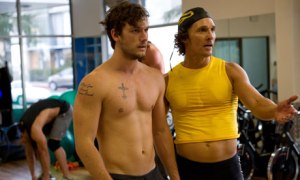 This is your last chance. After this, there is no turning back. You take the blue pill – the story ends, you wake up in your bed and believe whatever you want to believe. You take the red pill – you stay in Wonderland and I show you how deep the rabbit-hole goes.

The blue pill, in the case of Magic Mike, is the marketing campaign for what I keep hearing is ‘the Channing Tatum Stripper Movie’. The same campaign that, when I told my mate I was reviewing the film, made him smirk and question my manhood. After all, isn’t it a bit…well, you know? The posters don’t help, featuring Tatum, Alex Pettyfer and Mathew McConaughey topless, with no mention of director Steven Soderbergh, the Oscar & Palm d’Or-winning director that brought you Ocean’s Eleven, Solaris, and Sex, Lies and Videotape.

This review is the red pill. In the words of Morhpeus: remember… all I’m offering is the truth. Nothing more.

Despite the big budget trailers, the film immediately looks and feels wilfully independent. Soderbergh takes his cinema seriously, and it shows. Next you’re hit by a realisation that these actors, easy to write off as eye-candy cast to attract a certain demographic, can actually act.

Tatum is the titular Magic Mike, a thirty year-old entrepreneur / furniture designer who supplements his income by stripping. The film is apparently based on Tatum’s real life stripping exploits before he broke Hollywood. Even if this isn’t a particular stretch for him as an actor, he carries the film through sheer dint of his charm and movie star likability, also showing off his comic chops that appeared from nowhere in 21 Jump Street earlier this year.

The star of the show though is undoubtedly Matthew McConaughey as Dallas, the Svengali of Mike’s ‘dance troupe’. This part-Peter Pan, part-Fagin is the stripper who can’t give up the thrill of entertaining the ladies, while throughout the film his surface bonhomie slowly peels away to reveal a quite sinister paranoia and survival instinct.

The film falls down on its familiar plotting (with every twist and turn sign-posted a mile away) and some weakly written female characters (Cody Horn and Olivia Munn do the best they can with archetypal ‘love-interest’ roles). Ultimately though, this film focusses on the men it’s portraying. Just not in the way you might expect.

Magic Mike is a funny, charming, and relatively unsexy film. It would be a shame if half the population disregarded the film based on the marketing. Indeed, there is far more oiled male flesh and homoeroticism in blokey favourite 300.

Magic Mike is available to buy on DVD/Blu-ray today.