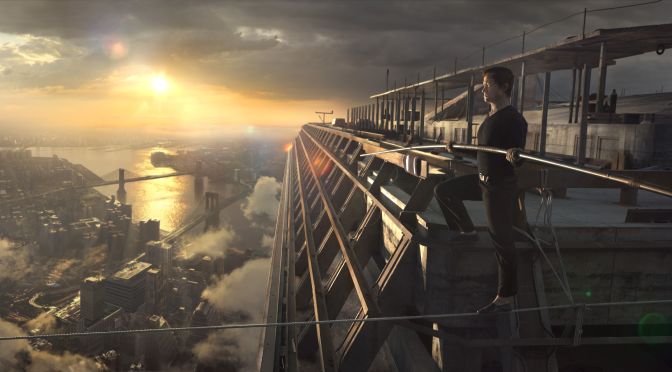 “I whisper so the demons won’t hear me. It’s impossible. But I’ll do it.”

The story of Philippe Petit is as amazing as it is insane. A man who fell in love with the idea of doing a tightrope walk between the towers of New York’s World Trade Centre years before they were even built and spent every waking minute in the pursuit of this dream. Honestly, if it wasn’t for the fact that a few recommendations and the announcement of this film pushed me to watch Man on Wire, the documentary inspired by the same autobiographical book as the film, I’m not sure I would have ever believed anything I saw on screen this weekend.

Determined to become a tightrope walker from a young age, Philippe Petit (an amazing Joseph Gordon-Levitt, but I’ll come to that in a bit) devoted his entire life to performing after watching a circus tightrope act and finding himself to have a bit of a talent for it. Spending all his free time and money learning the secrets of his chosen craft from circus veteran and high wire family patriarch, Ben Kingsley’s Papa Rudy, Philippe soaks in everything he can from his mentor and sets about making his name.

Following Philippe from his days as a street performer, to his discovery of a news article talking about the World Trade Centre plans and how tall the towers will be. We see him go from his first public failings to the moment he is inspired by the towers of Notre Dame Cathedral and wire walks between them. Explaining his process in getting his wire across and how this will be infinitely more difficult at over a hundred floors up and god knows how far away the other tower is, this small-scale trial run for Philippe’s “coup” is a heart stopping look at how the man pushed himself to not fail.

On to New York and Petit and his accomplices, an Ocean’s Eleven style collection of misfits that he and his street artist girlfriend have assembled on both sides of the Atlantic Ocean, set about pulling off the most elaborate and illegal street performance in history. As the daredevil wire walker edges closer to his big day, he has to battle through countless obstacles; from the security around the unfinished buildings to the fears and doubts building up inside him as the day he tries to conquer the world’s tallest buildings gets nearer.

The Walk is, without a doubt, a spectacle piece. Designed for the 3D IMAX experience that this week’s previews have been offering and it delivers, completely. Robert Zemeckis’ biopic is as beautifully directed as any in his filmography, with the added factor of being able to give us all a stomach churning look over the edge of the Trade Centre towers, staring at the abyss of the 415 meter drop to the streets of Manhattan. Every gust of wind and every shake of Philippe’s wire are quickly followed up with stomach churning imagery of the impending fall that, for those that don’t like heights, would be vomit inducing. The further up the film’s lovingly recreated Twin Towers we are taken, the more we are treated to sweeping New York vistas and plunging views of the streets below the performer. The direction and cinematography is so striking, that every time Philippe Petit arrogantly flutters around on the edge of the building or screws around on his rope, it instantly puts your heart in your throat and has you clinging on to your seat for dear life.

And speaking of Philippe Petit, we really need to spend some time on Joseph Gordon Levitt’s performance as the crazy daredevil. Because if you ever had doubts about JGL’s acting abilities, and you really shouldn’t have by now, then this should clear things up for you. Anyone that has seen Man on Wire, a film that is almost required viewing before watching this film so you can get a feel for the guy, will know that Petit is a wacky, wacky dude. I mean, most performers like this have their quirks, but this guy absolutely lives in his own little world; unicycling around the streets of his home town and mucking around on ropes at stupid heights are evidence to this. He’s such a great, interesting character and I was really interested to see how he would be brought to the screen. I wasn’t disappointed. From his opening lines to his final words, Levitt’s incarnation of Philippe is spot on. As he narrates the entire film from the torch of the Statue of Liberty with the The World Trade Centre towers standing behind him the entire time, Levitt IS Petit. The way he moves his body, his eccentric way of describing everything and his generally weird and wacky overall persona is right there for all to see. JGL does a wonderful job of bringing those of us that might not necessarily watch documentaries an amazing insight into this kooky little dude. With excellent support from Charlotte Le Bon, James Badge-Dale and Ben Kingsley, Joseph Gordon-Levitt has brought a legend to the screen with superb results.

The Walk‘s two hours don’t fly by, but you won’t be bored either. It’s split pretty much evenly between getting to 1974 New York and making the titular walk. Its moments of story telling are deep and interesting, whilst its time on Philippe’s wire, the streets below and all the space in-between are brilliantly intense. Robert Zemeckis has made the true story of a genuinely interesting guy into a genuinely interesting film and the only people that should be avoiding this flick, are those with a crippling fear of heights.

Do you want to hear a magic trick? How many C’s are there in Failed Critics?

Answer: Four! Specifically, Owen Hughes, Phil Sharman, Andrew Brooker and special guest host, Jack Stewart. I will leave it to your imagination to work out what the ‘C’ stands for…

…All right, it was ‘critics’, of course! Failed ones, but what else could I have possibly meant..?

Also on the podcast: Brooker walks the line with Oscar winning documentary Man On Wire; Phil tentatively recommends Jonathan King’s (yes, that one) self-produced Vile Pervert: The Musical; and Owen shouts from the stands about indie doc Sons of Ben: The Movie. There’s even time for Phil jump into the host’s chair briefly for this week’s quiz, and we rant over SPECTRE‘s potentially 160 minute run time.

Steve Norman returns as host next week along with Owen and guest Callum Petch to review Everest. Join us then!