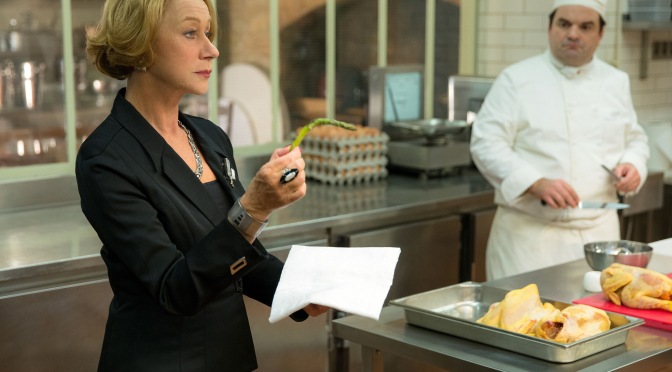 The Hundred Foot Journey is exactly what you’re expecting it to be from its premise, trailer and poster.

I will not spend more than 700 words reviewing The Hundred Foot Journey as, quite frankly, I don’t need to.  It is exactly the film that you are expecting.  It is a comedy-drama based on a novel, directed by Lasse Hallström (post 2000s Lasse Hallström, so the man who brought you Dear John, Salmon Fishing In The Yemen and Safe Haven), about an Indian family who move to Europe in an effort to get away from a revolution in India and to open a restaurant.  The father of the family (Om Puri) settles them in a restaurant in a quiet French village right across the road from a respected Michelin starred restaurant, headed up by Madame Mallory (Helen Mirren), which puts them into direct competition with one another.  Casual racism, classism, sabotage, respect, acceptance, success and, yes, romance all ensue whilst Papa’s eldest son, Hassan (Manish Dayal), experiences great success and yada, yada, you know exactly what’s going to happen.

This is not exactly a major, film-ruining problem in and of itself; I just gave a glowing review to The Guest, a film that was exactly what it looked like it was going to be.  The problem is that the film is so utterly mind-numbingly boring.  I mean, don’t get me wrong, it’s decently made.  It’s got some decent shots, the tone doesn’t lurch about too much, Helen Mirren is Helen Mirren, and it’s all nice enough, as “nice” movies are wont to be.  If you have an affinity for inoffensive “nice” films, this one should be right up your alley.  I, however, was literally bored to tears.  No, really, this genuinely happened!  I rested my head on the armrest for a short while and found myself tearing up randomly.  Nothing sad was even happening on screen!  I didn’t even know it was possible to be genuinely bored to tears until it happened!  The more you know, eh?

Look, folks, I tried.  I really did try.  I tried to be engaged, I tried to like it, I tried not to roll my eyes when the slo-mo and the lens flares and the soft focus and the sudden burst of threat to keep proceedings from being too treacly were busted out one after another, like a bingo card was being filled somewhere on the production sheet.  Sometimes, one really does just need a “nice” movie to counterbalance the loud blaring of big blockbusters.  But, man, did I ever find this one dreadfully dull.  At around about the 75 minute mark of this inexplicably two-hour movie, I checked out.  I didn’t walk out, but my mind did and I spent the remaining hour of its time thinking about quite literally anything else.  The Kasabian gig that I’m off to in December, this one new The Juan MacLean song that has been stuck in my head forever, whether I really want to go this gaming expo at the end of the month, how my cousins are doing, how long it is til I get back to uni, if my friend Jackson is having a more productive and engaging day than I am… stuff like that.

I only really snapped to attention about five minutes before the end, and that’s only because the film made it very clear that it was finally wrapping up.  Look, I’m sure that there are people out there who go bananas for inoffensive treacle like this.  The kind of film that is competently made yet wholly uninspiring but it’s a nice alternative to what else is on so it’s not a waste of time.  Hell, I often count myself amongst that group (obligatory reminder that I positively reviewed The Love Punch a while back).  But, sorry, I just found this one mind-numbingly boring and I wasn’t engaged once.  If you like this kind of thing, and you’ll know if you are because it almost literally does what it says on the tin, then go for it, you’ll probably enjoy it.  But I didn’t laugh, I wasn’t moved, I was pretty much never engaged, and there is nothing going on under the surface.  It’s the most boring film I’ve seen all year, if nothing else.

Callum Petch is stood here naked with the junkies thinking “margaritas”.  Follow him on the Twitters (@CallumPetch)!