It’s that time of year where the big blockbusters come thick and fast, and this week the Failed Critics are putting on our red shirts, setting our phasers to stun, and splitting any and all infinitives we can find as we embrace Star Trek Into Darkness.

Next week we’re reviewing our second Dwayne ‘The Rock’ Johnson release this summer, with the latest in the seemingly unsinkable Fast and the Furious franchise.

A continuing series where Failed Critics contributors look back on a particular decade in the world of cinema, choose their favourite films from each year of that decade, and discuss the legacy those years have left us.

As this is podcaster Gerry’s idea, he’s nabbed the noughties. Here he gives us his top five from 2002 – be sure to check out the entries for 2001 and 2000 if you haven’t already done so. We’d love to hear your thoughts on these so please get in touch with a comment or on twitter.

5. The Lord of the Rings: The Two Towers

I think we might have made a mistake leaving the Shire, Pippin.

The first was a towering achievement of storytelling and fantasy narrative brought to life on screen; the follow-up continued that great work and showed a generation of film fans and aspiring film-makers what epic productions are like. With more action than its predecessor, The Two Towers stepped up the cinematic intensity and silenced criticisms from some corners that the films were long and boring. Jackson builds steadily towards a triumphant final hour centred around the battle at Helm’s Deep, a battle scene which absolutely captivated my imagination as a 13 year old watching this in the cinema. I have, of course, since seen many epic films with epic battle sequences but this film is often a benchmark to compare them with. Podcast listeners will know I moaned about The Hobbit recently but as you may guess from this series, I bloody love TLOTR trilogy, and a decade on The Two Towers remains a staggering achievement, a lesson to us all on how to do exciting fantasy drama on a massive scale.

Once you do something, you never forget. Even if you can’t remember.

Studio Ghibli films are widely regarded by cine-literate people as outstanding. Yet the majority of the population seem blissfully unaware of their work. Spirited Away is much like their other films – it gets to the heart of childhood and imagination, transporting us forward into a hitherto unseen world of the creator’s making while simultaneously catapulting the viewer back to their own youth, that sense that magic lurked so close that a wrong turn could mean you winding up in a vastly different reality to your own. That is precisely what happens in this film. Chihiro’s family end up getting lost and wandering into an abandoned theme park – her greedy parents eating the tempting food left seemingly unattended and, of course, being transformed into pigs. Fans of Disney and particularly Pixar will find much to love in this classic animation, both in thematic content and the rich visuals our senses are practically assaulted with from the word go. I don’t think it quite matches up to My Neighbour Totoro or Grave of the Fireflies (note to Matt Lambourne – they’d better be 1 and 2 for 1988) but nonetheless, this is better than 90% of the kids films you will ever see – whether you’re a nostalgic adult or a child who hasn’t yet lost that wonder at the potential marvels of the world around them. [I’ve included this for 2002 as it was released in Japan in 2001, film festivals around the world in 2002 and in the UK in 2003, making 2002 the middle ground in such a confusing and drawn out release schedule]

I have a love in my life. It makes me stronger than anything you can imagine.

I’m not going to lie to you – I only watched this film about a month ago. I absolutely loved it. No, in fact, I fell in love with it. A mild introduction to art-house cinema for the uninitiated (or soft-core art house if you like), Punch-Drunk Love is a quirky tale featuring Adam Sandler as a possibly autistic, possibly partially psychotic entrepeneur who falls for slightly-less-odd Emily Watson.  Despite the backdrop of constant belittlement from his seven sisters, their romantic journey begins, alongside Sandler’s efforts to disentangle himself from a scam he fell into by ringing a phone sex line to chat about his life. It sounds weird and it is a bit, but if you doubt Sandler’s credentials for this then you’ve obviously never listened to Mark Kermode before. Literally the only downside to watching this film is that you will now be even more annoyed by the constant stream of utter shit Sandler is churning out these days when he is capable not only of genuinely funny films like Happy Gilmore but also excellent serious acting performances like he puts in here. Psst Adam, here’s a hint – make more films with people like Paul Thomas Anderson and less with Dennis Dugan and you might be ok. 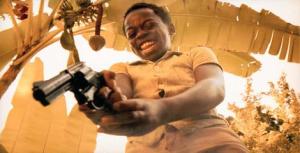 You need more than guts to be a good gangster. You need ideas.

A gripping tale of corruption, poverty and crime in the underbelly of Rio de Janeiro, City of God did wonders for Brazilian cinema. I actually studied a module on Brazilian cinema in University purely based on the fact that in doing so I could watch City of God again and find out the context behind it. For all the complex and important social issues it explores, City of God has a fairly standard cinematic trope at its core: two boys grow up in the same place, take different paths in the face of external pressures, yet their lives always seem to be intertwined and meet with dramatic consequences. Famed for its use of first-time actors taken from the streets of the favelas themselves (even including the mother of one of the real-life criminals depicted in the film), there is a brutal realism to Cidade de Deus that some viewers may find unpalatable. In my view it is that harsh realism which makes the film so powerful and for it to be viewed as anything other than a strength is missing the point entirely. This war between drug lords really happened. It wasn’t nice. With brilliant cinematography that captures the lo-fi 70s vibe of the time whilst still producing stunning visuals and some iconic shots, it is no wonder that the film remains one of the most successful and well-known films in ‘world cinema’ to UK viewers. Fernando Meirelles hasn’t made the move to Hollywood big-shot as many predicted but is trying to make himself the Brazilian Almodóvar. Speaking of my mate Pedro…

On the face of it, Hable con Ella is a pretty odd film. It centres on the solitude and inner turmoil of two men who bond over the beds of the female coma victims who they care for, the gradual entanglement of their lives – whilst in parallel the events leading up to the film’s present are slowly unravelled in flashbacks. There is a quiet power to the film which draws the viewer into this world so deeply that it is impossible to forget. Essentially, old Pedro tests how far he can push an audience (again), this time in terms of how much you’re willing to forgive because you like someone. I often say this about foreign films on the podcast but THIS IS WHAT CINEMA IS ABOUT. Tremendous performances, a director whose vision is so clear and whose skill is so well-developed that they are able to interweave symbolism and narrative to devastating effect, a story which engages throughout and an exploration of wider themes and societal issues without being preachy or ever failing to entertain.

Like all of his films are to some extent, at heart this is an exploration of gender roles. We have the two male leads crying over a performance at the ballet; a female bullfighter who is harsh and masculine, while her boyfriend is vulnerable and openly emotional; a male nurse; and a now infamous scene from the film-within-the-film which seems outrageously shocking, but is in fact less shocking than what it masks. There are a number of genuinely haunting scenes in Talk to Her, precisely because we are drawn into the drama so powerfully by the cast and crew. Javier Cámara and Darío Grandinetti are mesmerising. Almodóvar was under some serious pressure after the global success of All About My Mother and this was what he came up with.

In my opinion it’s his finest work – in a catalogue of films that most people in Hollywood would be proud to have in their DVD collection, let alone make. This is cinema. This is art without being arty or pretentious. This is a film about humanity, morality, imperfection, societal conditioning, sex, solitude, normality, mental illness… There is a disturbing, unsettling effect as you question your morality and precisely why you feel sympathy or empathy at certain points. It pushes you to think outside normality and ask questions of yourself and the world because it has engrossed you so totally and manipulated you so delicately. That, for me, is what cinema is.