There’s this film that exists in the real world that tells the story of someone who, each day, forgets everything that has happened to them. A form of amnesia that’s rife for basing a mystery-movie around. A twist here, a shock there, a revelation half way through that changes everything that’s gone before; it was an ambitious project that was both original and very entertaining. 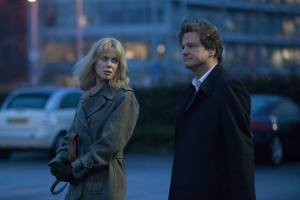 But enough about Memento. (See what I did there? They’re both about.. ah, never mind.) The lazy and obvious comparisons to Christopher Nolan’s award winning hit from 2000 (and currently the 40th most popular film of all time according to the IMDb ‘Top 250‘) pretty much end here.

Rowan Joffe’s movie, based on the S. J. Watson best seller of the same name, stars Nicole Kidman as the lonely amnesiac ‘Christine’ (as her doctor (Mark Strong) refers to her. Or ‘Chris’, as her husband Ben (Colin Firth) calls her. Or Chrissie, as her only friend calls her. Depends on which character you like most, I suppose?) Christine suffers from anterograde amnesia, which affects her short-term memory. Every night, Christine’s mind erases everything she’s learned that day. She will always wake up the following morning with absolutely no recollection of anything that has happened to her since she was involved in a traumatic event several years ago. She’s now forty years old and has no memory whatsoever of meeting Ben, never mind marrying him. With the aid of a daily morning routine consisting of her spouse explaining her condition, reading post-it notes with her name on stuck to photographs in the bathroom and answering the phone to a doctor claiming to be treating her without Ben’s knowledge, she slowly begins to unravel the mysteries of her past. Both recent and distant.

A common pitfall for psychological dramas is often the over-reliance on putting all of its eggs into a shock-twist basket, delivered approximately two-thirds to three-quarters of the way through, that suddenly changes how you see everything that’s gone before it. A frequently used example of how to do this successfully would be the Darth Vader reveal in Star Wars. Not only is it timed to perfection, but it changes character dynamics and their motivations, greatly impacts the story and comes as a massive surprise (ignoring the fact that it’s pretty well known these days). Just take a look at YouTube for some of the reactions kids have had to that scene. That is how a good twist should make you feel.

There are some notable down sides, though. Focussing too much on a twist can also detract from the overall quality of a film. If the build up is too weak or obvious, meaning you see it coming from a mile away, then it loses the shock value thus leaving the viewer quite rightly thinking “so what?”. If the twist turns things around too far, it becomes ridiculous, unbelievable and nonsensical, in turn removing that vital suspension of disbelief. Tease the twist too much and the audience will start to suspect that what’s happening on screen is little more than filler and thus get bored of waiting for the inevitable. There’s a very fragile balance to be maintained that few great psychological thrillers manage to tread.

However, what if the entire film was a series of twists? What if all that the main character knew about herself – about the situation she’s in, her back story, about who the other people in her life are etc – what if that was the same as what you (the viewer) knew? That is to say, virtually nothing. From learning about her family, to receiving a phone call from Dr Nash informing her that she’s sneaking around behind her husband’s back to receive treatment; these are all revelations for the main character, as well as for the audience. You learn as she learns with each progressing day with only the benefit that you can remember this information, rather than requiring a video diary every 5 minutes.

Of course, in a film like this, some of these revelations hold a much greater significance than others. Unfortunately, Before I Go To Sleep does have issues in maintaining interest in each new piece of information that it bombards you with. Some of which are (as you would expect) red herrings and others do not seem to hold any importance to what’s going on at all. Whereas some of the seemingly more relevant disclosures are definitely worth waiting for. They mix things up, creating new angles to the relationship between doctor/patient, or husband/wife. Details of which were apparently spoiled the other day live on the BBC Breakfast during an interview with Nicole Kidman. Obviously I’m not going to tell you what was revealed! That would be completely unfair of me. Wouldn’t it, BBC?

How many viewers do you reckon watch that show gets? A million? Two million? I bloody hate spoilers.

I digress. There’s very little fat to trim from this short 90 minute movie, but there are elements that are very repetitious. By its very nature, they are issues that there’s no getting around. Spanning approximately two weeks of Christine’s life, there will be days where she has to repeat certain actions. The majority of these are tucked away very cleverly in overlay narration, but occasionally it gets irksome. It’s also too uneventful for a thriller, with most of the major events in the plot occurring through conversation or exposition. In addition, it’s too light-weight for a serious drama. The dialogue in particular leaves a lot to be desired. Nicole Kidman is a good actress. If she’s scared, we’re going to know she’s scared from the way she’s behaving. Was it really necessary to make her exclaim “I’m scared” so often? Superfluous dialogue like that has no justification and patronises those who are watching the movie.

Whilst I’m on the topic of Nicole Kidman, she plays Christine in a very plausible way. It is easy to believe she is genuinely suffering from this illness and is an emotional wreck because of Kidman’s ability to convincingly portray that high level and range of emotion. She doesn’t overdo (nor underplay) her role. Essentially, she makes the most of a rather wishy-washy script. There’s dashes of humour throughout the film, but they’re few and far between and quite possibly the weakest aspect of her performance. Colin Firth and Mark Strong are pretty much the only other two main characters who are given any worthwhile screen time, save for a late appearance from Anne-Marie Duff. They are, on the whole, decent. Firth, playing the tired and manipulative husband, hides some dark truths from Kidman that gradually begin to seep out as her relationship develops with the uncharacteristically non-menacing Mark Strong. We’re not talking The King’s Speech or A Single Man heights for him, but of the two main support characters, he probably has the most complex role to play and does it to a good enough standard. Firth and Kidman have a similar level of on screen chemistry to that which they achieved together in The Railway Man earlier this year, but it’s nothing special.

The saving grace for this welterweight whodunnit is the fact that, for at least 60 to 75 minutes, it will keep you guessing. You forgive any moments of boredom or sillyness (and there’s plenty here that is utterly ridiculous, by the way) because there’s always a “what happens next” waiting for you around the corner to peak your interest. It establishes its premise quickly and without any wasted time, barely leaving pause for thought about just how absurd the plot is. But as shaky foundation after shaky foundation is built upon, it does wobble towards the end like a Weeble without totally falling down. It’s a fine one time watch that won’t pull up any trees. But, a bit like rain on your wedding day or a free ride when you’ve already paid, you’ll probably have forgotten most of it by the time you get up for work the next day.

Before I Go To Sleep is out in cinemas nationwide right now. You can find Owen ranting and raving about whatever film he’s seen lately over on Twitter.