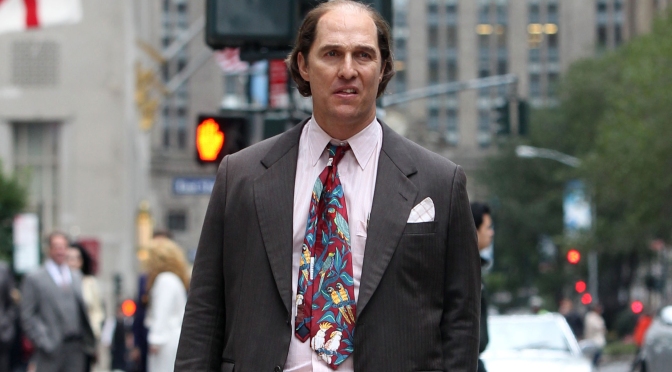 “We work hard in this business. Sometimes for nothing.”

I’m gonna go ahead and say this straight away, if you’re going to release a “based on true events” film in February, do yourself a favour and make it good. Because having just sat through Gold, hoping for something worthy of the time of year it’s been released in, I’m starting to burn out on uninspiring true stories.

Matthew McConaughey is Kenny Wells, a third generation miner who’s struggling to keep himself afloat. Desperate for a lucky break, he turns to fellow prospector Michael Acosta (Edgar Ramirez) in a last ditch attempt to find a score worth talking about.

When the pair start digging holes in Indonesia, what seems to be a waste of time soon turns more than a little profit. With their freshly golden find, the money starts pouring in at a rate nobody can believe and as the list of investors grows, so do the zeros on the bank balances of everyone involved. But as is always the case, things aren’t as great as they may seem on the surface and between bigger businesses muscling in on Wells and Acosta’s mine and Wells himself spiralling out of control, it’s a fight to see what will ruin things first.

Gold tries so very hard to be a film it clearly isn’t. It’s got the DNA of so many brilliant films yet always feels like it’s playing second fiddle to greats like The Big Short and The Wolf of Wall Street. Watching Kenny Wells and his partner struggling at the tail end of the financial crash should be a thrilling tale of a guy (or guys) pulling themselves up from the dirt they’re digging around in.

Instead, it’s a story that’s paint-by-numbers in every sense. Every twist and every turn is telegraphed and predictable in a way that ironically I honestly didn’t expect. By the end, I was spending more time looking at my watch in bored frustration than I did the screen.

Oscar winning writer and director Stephen Gaghan – the man responsible for films like Syriana and Traffic – seems to have let his stars hit the auto pilot, as he has done too. The man that made such well thought out, tense pieces in the past has settled for what I consider possibly the blandest film he’s ever been a part of. The same goes for its stars: McConaughey and Ramirez are both usually so good nowadays and yet here they seem quite content with phoning in a performance just to get the film made. I’m just so disappointed with the pair of them.

The best acting on that screen was from Matthew McConaughey’s makeup department. Most notably from the annoying snaggletooth that seemed to stay pearly white as the rest of the man’s teeth got progressively more yellow. It was the best bit of acting of the entire production, and a literal standout performance.

There are a dozen biopics that tell this story much better than Gold. I honestly cannot recommend it. I mean, it’s ok, but it just seems like a project that everyone got involved in to get a few bills paid. No one here put a full effort in. I expected great things from this in Oscar season, but it turned out to be another movie put out with the trash, ready to be forgotten with everything else out this month.