Back when Failed Critics was in its infancy, it was the journal of a man trying to educate and better himself by watching the IMDB Top 250. These days we prefer to send Failed Critics Podcast host Steve Norman on a suicide mission to watch the biggest box office disasters and report back to us. 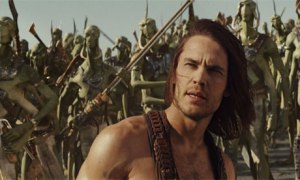 John Carter (‘of Mars’ was dropped from the title to help the film appeal to more people) is a film so bad that even as a critic I turned off before the end. I don’t know how much before the end, but I reckon half way through the film.

John Carter is a man from Civil War era America and he somehow goes to Mars via a method I can’t remember and (probably, remember I didn’t finish it) becomes some kind of victorious, all conquering hero.

The titular character is played by Taylor Kitsch who also starred in Battleship in the same year. Maybe the Mayans were predicting the end for him in 2012 rather than the world.

It also features Bryan Cranston briefly at the start who, while a good actor, is in danger of appearing in a lot of crap and sullying his reputation. He appears to be in everything at the moment.

Willem Defoe is also listed as appearing but I didn’t get that far. I think.

The acting is wooden throughout. No one engages you or makes you care about their character. It’s a big budget sci-fi film, I’m not expecting great character acting or someone pulling out an Amour like performance but I’d like to care enough about the person I’m watching to stick it out to the end.

The special effects look dated as well, and the CGI is poor. It’s unforgivable for a film that a) spent that much money on it and b) was only made last year.

There is potential given the source material to make this into a series or franchise. I can’t see that happening.