An insightful, honest and nostalgic character study into the career and personal demons of one of England’s most naturally gifted footballers to have ever played the game. 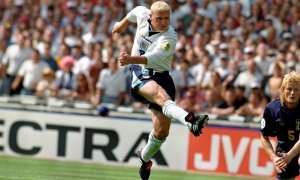 Don’t worry, this article will evolve into a review of sorts eventually. But I feel that a touch of context is required first to perhaps disclaimer the lack of objectivity.

I can pinpoint the exact moment I fell in love with football. I was just nine years old on Saturday 15th June 1996. At around 4.35pm, whilst sat in front of the TV with my family, I witnessed a midfielder with short bleached blonde hair, wearing the number 8 on his shirt, flick the ball over the head of a Scottish defender with his left foot, then control and volley it with his right foot in one movement, putting England 2-0 ahead against their rivals at Wembley.

Before that moment, football was just something I played with friends at school or down the park, or with a tennis ball on our sloped driveway or in the neighbour’s back garden etc. Something to be enjoyed as a fun game, but not something I treated particularly seriously. I’d check the teletext scores so I knew roughly how our local teams were doing, mainly to be able to keep up with school chums about how Wolves or the Baggies would be getting on. Schmeichel, Shearer, Cantona, Fowler, Ginola and Steve Bull (well, if you were from the West Midlands) were the heroes of the playground. I remember a kid at school, a Villa fan, even had ‘SAVO’ shaved into his head in honour of Savo Milošević! They were the players you pretended to be. But Paul Gascoigne? No, he was just a little before our time.

You see, Gazza was the hero of the generation immediately prior to mine. The most talented English player possibly ever who took our country to the brink of a World Cup final in 1990; I’d love to say I remember it, or that it inspired me in some way, but in truth I was just three years old at the time. I was still too young for our disappointing elimination from Euro 92 (which Gazza was injured for anyway) and with England not participating in USA 94, I’m afraid Paul Gascoigne played little to no part in the footballing education of my youth. I only finally watched in full that fateful semi-final match between England and West Germany for the first time ever last year during the build up to the 2014 World Cup.

Anyway, back to that Saturday afternoon in June 1996. This Gazza chap, who I only knew about mostly because of my parents, suddenly in a split second became an instant hero for my generation too. Such is the power and magic of football that it can ingrain itself in your psyche so vehemently that the status of players can be elevated from ‘good’ to ‘legendary’ in a mere moments. I maintain to this day that I’ve never seen a better strike partnership than the one between Shearer and Sherringham after that match against the Netherlands. David Seaman’s heroics during the penalty shootout against Spain convinced me to beg my parents to get me that yellow and purple goalkeeper kit with his name on it. To this day, I still can’t really say Gareth Southgate’s name without getting a little bit upset. Hell, the first CD I ever owned was Sugar Coated Iceberg by Lightning Seeds thanks to Three Lions, which I’ll never tire of listening to. And Paul Gascoigne will forever be the player who scored the most staggeringly beautiful goal that made me love football.

Fortunately, I wasn’t aware of his personal problems back then. His injury record, his loutish behaviour and of course his much documented battle with mental health issues and alcoholism. Even at that point in his career, his private difficulties were anything but. Whilst (much like the opening 500 words of this article) Jane Preston’s documentary, Gascoigne, plays mostly on nostalgia, there is an honesty and integrity that comes from Gazza speaking directly into the camera. Whether recounting his incredibly distressing childhood traumas, or even reeling off hilarious anecdotes about the antics he’d get up to in training, it definitely feels like you’re listening to a sober, wiser man.

Although you might be expecting all 88 minutes of this documentary to consist of apologies, regrets and excuses for the way he treated his close family and friends during his darker moments, it actually plays out more like a character study. Beginning with Gascoigne talking candidly about growing up in the North East, Preston lets Gazza tell in his own words the tragedy that befell his friend on the way to training one afternoon, shaping his outlook on life and even the way he would play football. It’s only the first of many other segments to really examine what he was like beyond the legend, of how he became the person he is today, that’s tinged with a palpable emotion.

Over the course of the film, there are three other talking heads that pop up to add their own take on what Gazza was really like. Chelsea manager Jose Mourinho, who worked with one of Paul’s former managers and mentors, Sir Bobby Robson, talks about his relationship to the English midfielder. Former teammate Gary Lineker also shares stories of playing with such a talented and self-destructive player. Even current England captain Wayne Rooney, who was breaking through into the youth team at Everton during Gazza’s short stint there, talks about how influential he was to him. However, it’s only really Lineker who seems to have any worthy input, adding extra dimensions to Gascoigne’s own words, leaving Rooney and Mourinho left sounding like little more than popular names hired to sit in front of the camera and tell nice stories for padding.

You can pretty much approach this film from one of two angles. You’re either watching it for a nostalgic look back at the career of one of our greatest ever footballers, or you’re watching it because it’s about the wife-beating crazy drunk who turned up with a fishing rod, beer and fried chicken to the site of a police stand-off with an armed killer. There’s no getting around the fact that he’s both, but if you’ve purchased Gascoigne with the former in mind, you’re going to be more satisfied than if you’re after the latter.

That said, it does rather curiously switch tact about 65 or 70 minutes in, virtually not discussing football at all post-Euro 96; somewhat disappointingly leaving out tales about his omission from the World Cup 98 squad. Instead, it again shifts back to this character study. He talks about his addiction to alcohol, being sectioned by his own sister and his legal struggle for justice with the News of the World who tapped his phone calls for eleven years, assisting in his paranoid delusions. It’s why the fact that even though the documentary hardly feels any bigger than a 60 minute BBC production, it’s pretty much inconsequential. Every time Gazza is onscreen, you listen, you laugh or you cry a bit too, regardless of production values.

It would be naive of me to suggest that everyone will feel the same way I do. There are certainly people out there who cannot forgive Gazza for some of the things he’s done in his life, and that’s their prerogative to do so. However, Gascoigne certainly sets out mainly to help people like me to understand how the man whose right boot could ignite a passion for the sport he adored in others, yet who ended up the butt of many jokes and became the subject of outright disgust in some people, can still be held in such high regard by a nation of football fans. Who can still be seen as a national treasure in some parts. All the while, asking us many questions that Gazza must ask himself daily. If only he hadn’t recklessly injured himself in the FA Cup final and again whilst playing for Lazio. If only he had mustered the composure to take a penalty in Italia 90. If only he had stretched his leg out just that little bit further at Euro 96. If only he’d signed for Ferguson’s Manchester United instead of Spurs. If only…

Gascoigne had a short theatrical release here in the UK and is now available to rent or buy on DVD or VOD. Owen will also be talking about the documentary on this week’s podcast.